While training to become a professional mountain bike racer, researcher Dr. Shannon Mathis discovered cyclists spend numerous hours exercising each week — yet most have low bone density. Since then, The University of Alabama in Huntsville (UAH) kinesiology professor has been consumed with learning more about bone health.

This fall, Mathis will be able to expand her work in studying the cause of low bone density in male athletes and pre-menopausal women when the university acquires a dual-energy x-ray absorptiometry (DXA) system. The DXA is primarily used to assess overall skeletal health and changes in bone structure by measuring bone mineral density (BMD).

"A BMD measurement by DXA allows characterization of fracture risk," said Mathis, an Assistant Professor in the UAH College of Education's Department of Kinesiology. "This information can be used to inform health professionals of the need to implement exercise, nutrition, or pharmaceutical strategies to strengthen bones, decreasing the risk of osteoporosis."

Mathis obtained funding for the DXA from the 2016/2017 UAH Research Infrastructure Fund Program sponsored by the UAH Office of the Vice President for Research and Economic Development. The DXA is expected on the UAH campus by Tuesday, Aug. 8. The scanner will be located in Wilson Hall room 318, adjacent to the UAH Faculty and Staff Clinic, to allow for easy access to kinesiology and nursing students who may use the scanner for research purposes and to learn to assess BMD. 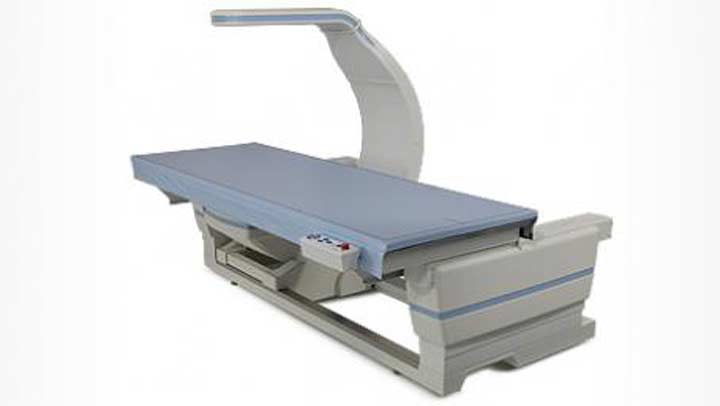 The DXA scanning system will arrive on the UAH campus by Tuesday, Aug. 8.

The DXA is an open x-ray table with a large scanning arm that passes over the entire body, and is equipped with low noise detectors that incorporates the same high-definition technology as used in computed tomography (CT) devices. The full body BMD measurement, Mathis said, is obtained in a single sweep scan which eliminates error and image distortion found in other devices. The exam is non-invasive, pain-free and comfortable with fast examination times (approximately 10 minutes). And, the radiation dose is very low, similar to spending a day in the sun.

More importantly, Mathis said, the DXA also provides the most cost-effective, valid, and reliable measurement of body composition, which is the total percent of fat mass and lean mass of a person’s body. "A high level of visceral fat mass is associated with a higher incidence of cardiovascular and metabolic (diabetes) disease. Although there are other means to estimate the percentage of body fat, the DXA provides a direct measurement of adipose tissue. This particular system also provides a measure of cardiovascular risk by estimating calcium deposits in the aorta."

Mathis, Dr. Ryan Conners also an Assistant Professor in the Department of Kinesiology, along with Dr. Gordon MacGregor, Assistant Professor of Biological Sciences, and Dr. Louise O'Keefe, Assistant Professor of Nursing and Director of the UAH Faculty and Staff Clinic will undergo extensive training sessions by HOLOGIC (manufacturer of diagnostic products) personnel to become licensed users. Mathis serves as principal investigator for the DXA systems project and Conners, MacGregor and O'Keefe are co-principal investigators. The departments of Kinesiology, Biology, and Nursing will have shared use of the DXA system for research projects as well as opportunities to teach students how to conduct scans.

In addition, Mathis and MacGregor will conduct studies to further their research on bone health. Specifically, Mathis and MacGregor examined bio-chemical markers of bone loss in pre-menopausal women. The two professors are currently planning the methodology to extend their current work to obtain BMD measures in their study population. Mathis has published two papers with a third in review, and she has presented HOLOGIC DXA data obtained from a previous institution at three international conferences.

Mathis said MacGregor also plans to explore transitional studies to test diet and exercise therapies in small animals as a correlative prior to human testing. "In particular, MacGregor will use the DXA to measure BMD in mice for two ongoing research projects. First, one of the major long-term risks of tyrosinemia is loss of calcium in the urine. This leads to a high occurrence of rickets in children with tyrosinemia" Mathis explained. "Second, the effect of exercise on BMD in mice will be studied. Mice will follow different exercise regimes while receiving different amounts of calcium in drinking water. The effect on bone metabolism will be measured with blood serum markers of bone growth and the long term effect of this regime on BMD will be measured using the DXA," she added.

The scanner will also be used in Conners’ upcoming research study utilizing the underwater treadmill in adults with type 2 diabetes. "People with higher amounts of fat collected centrally are at a higher risk for diabetes and cardiovascular disease compared to fat located peripherally" Conners said. "Reduction of abdominal fat is directly linked to improved insulin sensitivity and insulin receptor function within muscle tissue."

Mathis noted that improvements in insulin sensitivity and receptor function are linked to Hemoglobin A1c, the primary outcome variable of Conners’ research study. A DXA x-ray system is needed to detect changes in regional adiposity and muscle mass following a progressive and incremental walking program.

And, Mathis said, Dr. Louise O’Keefe will explore an opportunity to integrate the use of the DXA in the nursing program to screen older, mobile adults in nursing homes for bone density and institute a fall prevention program based on the findings from the DXA scan.

"Undergraduate nursing students visit nursing homes as part of their clinical training," O’Keefe said. "The students can work together to provide bone density screenings, identify individuals with a high risk for falls, and initiate a fall prevention program based on national guidelines."

Mathis has authored and published numerous articles and abstracts on movement and degenerative conditions, and bone density studies. She combined the fields of computer science, mathematics and exercise science to form a career in kinesiology. Her future academic plans include applying her research work in bone health to lower limb amputee populations.