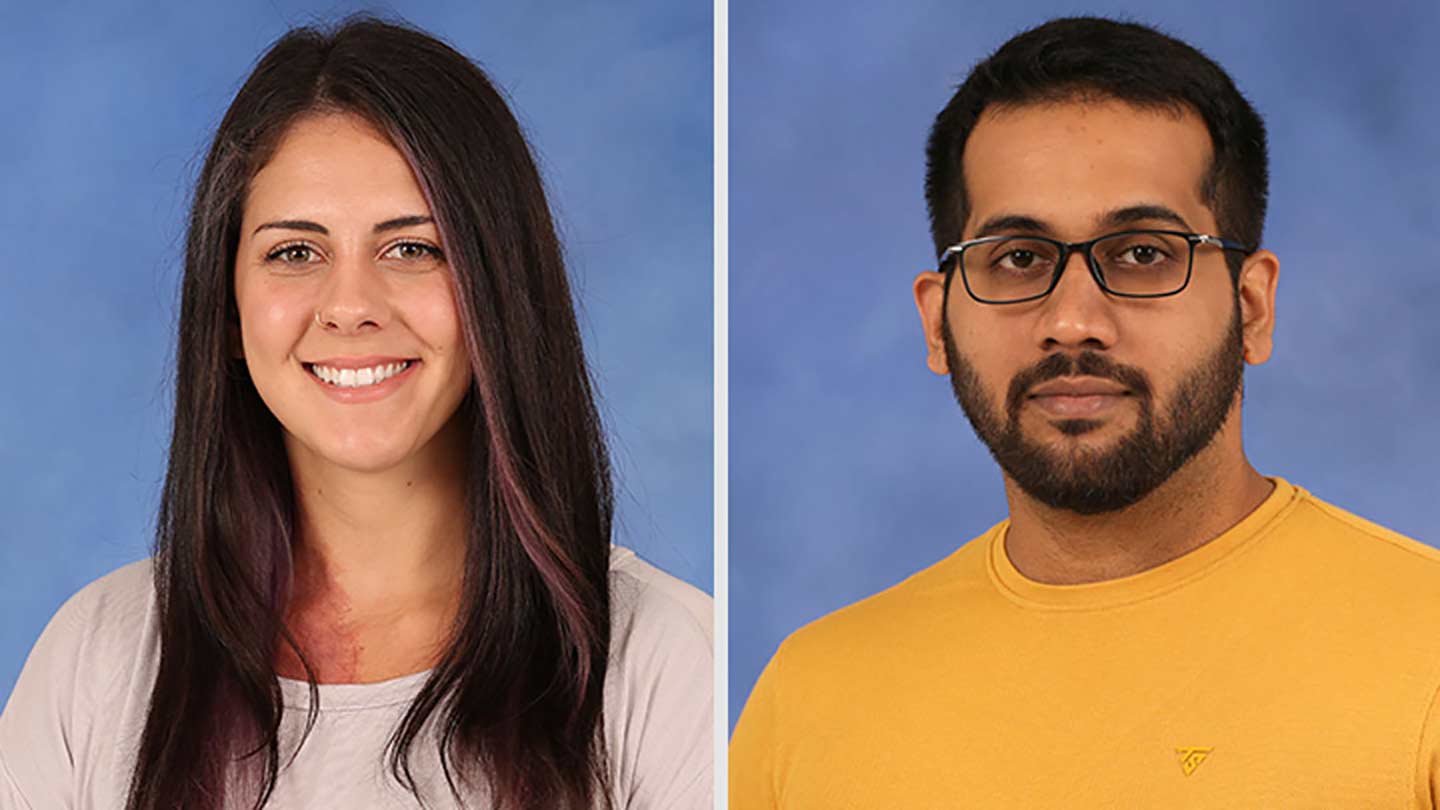 Katherine Davidson and Dinesha (Dinesh) Vasanta Hegde each won a $135,000 stipend to cover tuition, research activities and travel costs to attend workshops and conferences to continue their research at UAH, a part of the University of Alabama System.

Davidson, who is in the second year of her doctorate, was awarded to continue her research into the processes that cause the light shows on Earth called auroras. Davidson’s proposal is titled, “Investigating Ionosphere-Thermosphere Coupling in the Nightside Auroral Oval.” She is advised by Dr. Ying Zou, an auroral scientist and assistant professor of space science.

Hegde, who is a second-year doctoral student working as a Graduate Research Assistant in the Department of Space Science and at the UAH Center for Space Plasma and Aeronomic Research, was awarded a grant to continue his research into space weather. Hegde’s proposal is titled, “Modeling Space Weather with Quantified Uncertainties.” He is advised by Dr. Nikolai Pogorelov, a space weather scientist and a distinguished professor of space science.

NASA grants FINESST awards to graduate students who are pursuing research that is aligned with the NASA Science Mission Directorate in one or more of the following areas: Earth sciences, heliophysics, planetary science and astrophysics.

Davidson says she found out about the award at an interesting juncture.

“I actually found out right after getting a root canal, so it definitely brightened up my day!” she says. “I am extremely grateful for this opportunity to pursue my PhD while being supported by NASA.”

Her dissertation research will attempt to quantify the relationship between geomagnetic activity and thermospheric wind response to changes in ionospheric convection.

“This work is relevant because momentum transfer from the ionosphere to the thermosphere is an important mechanism for dissipating the large amount of energy injected into the high latitude ionosphere during solar storms and substorms, so we should know how geomagnetic activity affects that momentum transfer,” Davidson says.

Davidson credits Dr. Zou’s help in guiding her through her doctoral program, especially regarding interactions with the professional world.

“In terms of research, she points me towards the resources and knowledge that I need, while still allowing me to learn and grow as a young professional,” Davidson says.

Due to the competitiveness of the award, Dr. Zou was originally thinking of having Davidson apply for it during the later phase of her doctoral program.

“But Kat told me that she would like to take on the challenge, because even if she failed, she would be better prepared for the future,” Dr. Zou says.

“And then we tried our best. At that time, neither of us foresaw that we could make it this far. I think that Kat has made a really good story in her proposal and the reviewers see the big potential in our project,” she says.

“The FINESST award reflects the recognition that our science is compelling and impactful, and that Kat has a feasible and robust research plan,” Dr. Zou says. “This is a tremendous encouragement, especially considering that Kat had only worked on the project for about half a year at the time of applying.”

The award means that Davidson becomes an independent young investigator who can test and pursue her research ideas freely and confidently, Dr. Zou says.

“With this award being one of the most prestigious student awards – if not the most prestigious one – offered by NASA, Kat has the brightest future in front of her,” Dr. Zou says. “She will be a talented scientist that every institution would dream to have and will be offered all needed resources for her to grow into a world-class expert.”

Hegde says his offer letter boosted him after he initially thought he had not been selected.

“I was so glad and surprised to know the selection,” Hegde says.

“Since the notification deadline was already over, we had thought that our project would not have been selected. I double checked the offer letter to make sure of the selection,” he says. “Soon after, I received the email from my supervisor that it got confirmed. Immediately I called my sister, who is in India, to share this good news.”

He is studying the properties of the solar wind, a continuous stream mainly consisting of protons and electrons in a plasma state that flows outward from the sun and carries the embedded solar magnetic field along with it.

To do that, Hegde is using time dependent, data-driven and nearly real-time numerical models of the solar atmosphere and heliosphere being developed by Dr. Pogorelov’s research group, along with data from NASA missions including the Parker Solar Probe (PSP).

“The solar wind is a key driver of the space weather that forms the backdrop to the propagation of solar coronal disturbances – such as coronal mass ejections and energetic particles – towards the Earth’s orbit,” Hegde says.

Initially his research uses the Multi-Scale Fluid-Kinetic Simulation Suite developed by Dr. Pogorelov’s group and other existing coronal models. That will be followed by newly developed models from the Space Weather with Quantified Uncertainties project Dr. Pogorelov leads, as well as relying upon Dr. Pogorelov’s expertise as co-investigator of the SWEAP instrument onboard PSP.

“His invaluable experience in building these computational frameworks for the numerical models and handling the observational data will be of great help to carry out my research,” Hegde says.

Dr. Pogorelov says that Hegde arrived at the Department of Space Science at UAH with a clear interest in space physics and, especially, in simulations driven by observational data.

“Such simulations are invaluable for space weather predictions. Dinesh is a highly motivated student with interest in both data analysis and modeling, and he has obtained some fascinating results already.”

Hegde participated in the Space Weather Workshop, NASA Heliophysics Summer School and the Solar Heliospheric and INterplanetary Environment (SHINE) Symposium this year, according to Dr. Pogorelov.

“The FINESST fellowship awarded to Dinesh opens new possibilities for him to get involved in space weather research and pursue his PhD goals.”