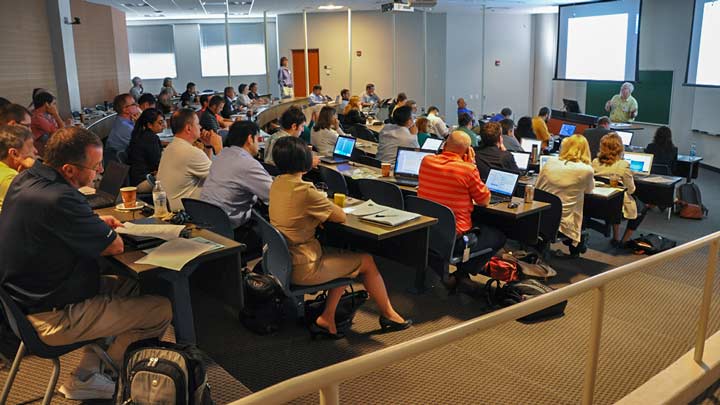 Scientists who study air pollution and officials who try to measure, forecast and regulate it can't wait to get their hands (and their computer models) on data from instruments aboard NASA's TEMPO satellite.

They are so eager, more than 150 potential data users met last week for a workshop in The University of Alabama in Huntsville's (UAH) Shelby Center for Science and Technology to talk about how best to start developing applications and ways to use that data at least four years before the satellite is scheduled for launch.

"This isn't a science workshop. This about talking to and listening to the users," said Mike Newchurch, a UAH professor of atmospheric science and the chairman of the workshop's organizing committee. "We have a broad spectrum of users here from all over the country, all walks of life."

TEMPO (Tropospheric Emissions: Monitoring of Pollution) is designed to look for several kinds of pollution in the atmosphere over North America, coast to coast from about Mexico City to the Canadian Arctic. At present, it is scheduled for launch into geostationary orbit in 2020.

He said scientists are eager to merge data from TEMPO with data collected by NOAA's new GOES-R weather satellite, which is scheduled for launch in November. So eager, he said, "they want to know if there are other combinations of satellites up there now that we can practice with."

Several questions were raised about how the massive TEMPO dataset (TEMPO will get high-resolution data in a spectrum of wavelengths once an hour during the daylight hours) will be archived, and how that data will be made available to the scientific community.

The size of the dataset is an issue, said Ron Cohen, from the University of California at Berkeley. "The TEMPO dataset will be a factor of 100 greater in volume than current (low-earth orbiting) satellites."