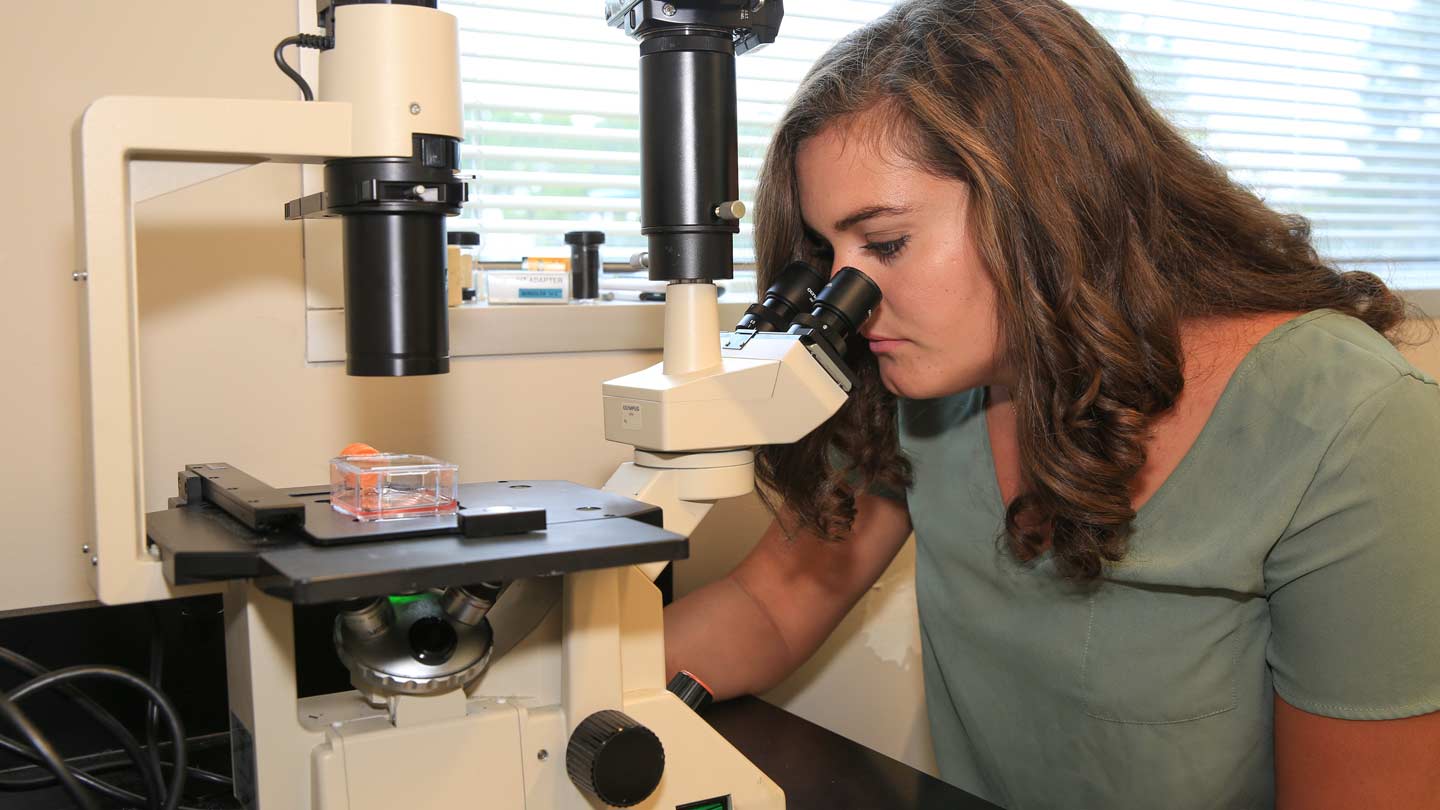 Junior biology major Shaylee Green, who spent the summer working with UAH’s Natural Products Research Group under the direction of Dr. Debra Moriarity, was one of nine Honors students selected to participate in the inaugural Honors Capstone Research program.

Regardless of how many classes a student may take in their field of study, there’s no substitute for experience in a world where things rarely go by the book. Enter the Honors College Capstone Research Summer Program at The University of Alabama in Huntsville (UAH), which gives up to 15 Honors students the opportunity to gain practical, hands-on skills – and a $3,200 stipend – by engaging in a research or creative project over the summer semester with work hours that correspond to a full-time job.

"This program recognizes those who have distinguished themselves as elite students and demonstrated unusual dedication in their pursuit of knowledge by enabling them to explore that passion for learning outside of the classroom," says David Cook, student research coordinator for the Honors College. "Those who participate are not only expected to complete the work for which they were funded, but they are also encouraged to share the fruits of their research with others."

Among the program’s first cohort of participants was Shaylee Green, a junior biology major and Lawrenceburg, Tenn., native who has her eye on a career in pediatric oncology. "I was intimidated at first, but being premed, I wanted something that would push me a little more," says Green of her decision to take part in the program.

Green’s summer was spent with the Natural Products Research Group, working under the supervision of Dr. Debra Moriarity, chair of the Department of Biological Sciences, to research the effect that compounds from plants may have on breast cancer tumors. She was initially planning to study the Aesculus flava, also known as yellow buckeye, for tumor-inhibiting abilities. But when the seeds from the plant couldn’t be collected in time to extract the needed compounds for study, Green pivoted to focus on compounds found in other plants, largely from tropical regions throughout the world.

She then tested those compounds to see if they had any effect on growth in human breast cancer cell lines for both estrogen-receptor positive and estrogen-receptor negative tumors. Those that showed promise were subsequently sent to Dr. William Setzer, a professor emeritus in UAH’s Department of Chemistry, for further isolation and testing to determine their cytotoxicity. "One of my favorite things about the research that I was able to do is that it has the potential to make a difference in the medical field and in people’s lives," says Green.

With her good instincts and ability to work independently, Green proved herself to be a "natural" in the lab according to Dr. Moriarity. "She was very intrigued by the different effects the oils had on the different types of cancer cells," she says. "I’ve thoroughly enjoyed having her work with me." She’s also enjoyed being a part of the program’s inaugural outing, particularly given the talent level of those involved. "It gives them the ‘why’ of what they’re learning," she says, "and it attracts good students."

Rounding out Green’s cohort in the program were eight other participants: Tyler Welty, Toyofumi Yamauchi, Madeline Glosemeyer, Spencer Jones, Kathryn Bradley, Kristen Bertrand, Delaney Humphrey, and Rahul Rameshbabu. Applications for the upcoming summer are being accepted through Nov. 30, and award notifications will be made in the spring.