Study asks how much impact genes have on behavior 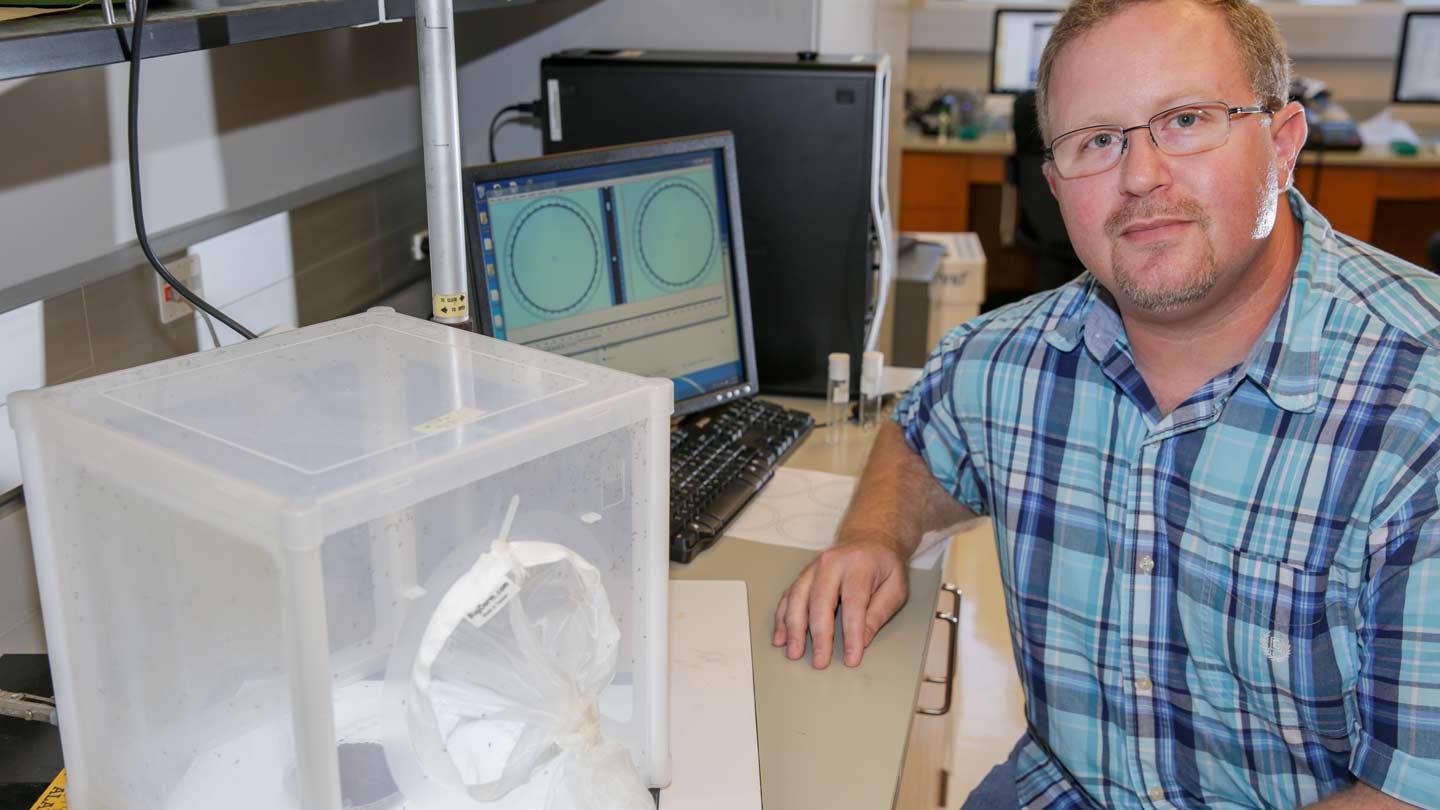 Dr. Luciano Matzkin in his lab with a cage holding cactophilic Drosophila flies under study.

How much impact do genes have on behavioral changes?

Efforts by the University of Alabama in Huntsville (UAH) researcher to better understand the genetic underpinnings of ecologically relevant behaviors have recently resulted in an award of $612,000 from the National Science Foundation (NSF).

"This research will help us understand the genetic architecture of behaviors that are important to the evolution of species," says Dr. Matzkin, an assistant professor of biological science and the principal investigator for the three-year grant. "What we want to understand is how these behaviors develop, how they evolve and how they are manifested."

We are looking at the genetic basis of behavior and how the environment shapes genomes over generations.

Dr. Matzkin's study subjects are the larvae of a species of cactophilic Drosophila flies, one population of which lays its eggs on the more spatially restrictive pads of prickly pear cacti on California's Catalina Islands while the other population lays eggs on the significantly larger organ pipe cacti in Mexico's Sonoran Desert.

"We are looking at the genetic basis of behavior and how the environment shapes genomes over generations," he says.

Scientists already know that the larvae on the more food restricted or smaller prickly pear pads behave differently than their organ pipe peers. In their more restrictive food environment, the prickly pear larvae are not as active as the larvae that grow on the organ pipe plant. Dr. Matzkin's research will zero in on genetic reasons for this behavioral variation.

Being conducted in UAH's Shelby Center for Science and Technology, the experiment first involves interbreeding the two populations for 10 generations. A generation takes about a month to be produced.

"We have created a set of cages where we can mix the two populations together over multiple generations," Dr. Matzkin says.

A time-lapse video made by scientists studying the speed and range of movement of the cactophilic Drosophila flies.

Researchers are observing the relative speed and distances traveled by the resulting larvae as the two populations continue to interbreed and mix their gene pools.

In about three months, scientists will test the activity level of the 10th generation larvae and then will genotype them using next generation sequencing technology at Huntsville's HudsonAlpha Institute for Biotechnology, where Dr. Matzkin is an adjunct faculty investigator. The technology will allow Dr. Matzkin to genetically associate regions of the Drosophila's genome to this ecologically important behavior.

"So once we identify a gene that has a significant effect we will knock out this gene to functionally test it, which should have an effect on behavior," he says.

To perform the genetic manipulations, Dr. Matzkin will use a new genome editing tool call CRISPR/Cas9 which allows researchers to selectively add or subtract bits of genetic information from genomes.

"We can also move one allele from one population to a new population and see if it has an effect on behavior."

The new tool lets researchers widen their investigations of Drosophila beyond those typically used in laboratory research, and Dr. Matzkin says that's an exciting development.

"Now we can use this technique to work on these ecologically interesting species," Dr. Matzkin says. "By using it, we hope to find the genes that are responsible for this behavioral variation."