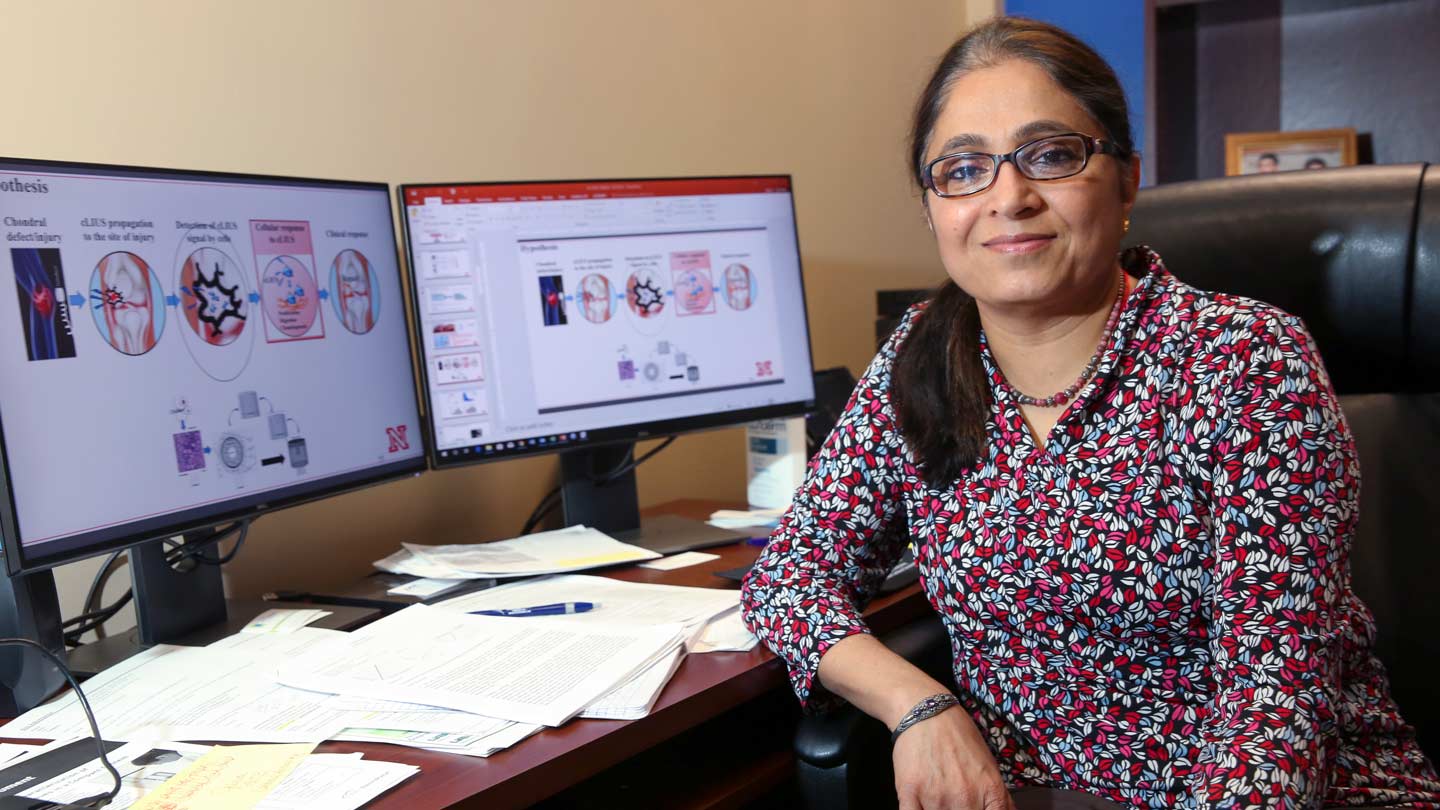 Dr. Anuradha Subramanian is researching the use of low intensity pulsed ultrasound therapy to regrow cartilage in articular joints.

Research underway at The University of Alabama in Huntsville (UAH) could provide stronger repairs for injured knees.

A low-cost, effective method that uses low intensity pulsed ultrasound therapy to regrow post-operative cartilage in articular joints like the knee or shoulder could result from experiments by Dr. Anuradha Subramanian, the chair of the UAH Department of Chemical and Materials Engineering (CME).

In a nation with more than 6 million articular joint injuries a year, mostly to the knee, that would be welcome news and could help avoid some knee replacement surgeries. And if it works in a rabbit’s knee, that’ll be the first hop to getting it to work in yours.

"The main focus of my research is to help the doctor to achieve the best possible clinical outcome," says Dr. Subramanian, who recently joined UAH as CME chair. Her efforts are funded by a two-year National Institutes of Health (NIH) grant.

Because it is a protein-rich matrix with very few cells and it has no blood vessels, the cartilage that serves as a cushion between bones in a joint such as the knee cannot regrow itself.

"Cartilage has no capacity for cell repair," Dr. Subramanian says. "So how can we replace what is lost?"

Current surgical techniques don’t optimize the bond between existing cartilage and new cartilage that has been grown from stem cell rich marrow blood in nearby bones, or grafted from another area, or grown outside the body and transplanted.

The stem cell technique, which uses microfractures created in the adjoining bone by drilling into it to produce stem-cell rich blood, is less than optimal because not all of the resulting mesenchymal cells convert to the chondrocyte cells needed to regrow cartilage. Some instead become fibroblasts and create much less sturdy collagen.

In both the stem cell and the grafting techniques, a weaker boundary layer lacking integration develops between the new and existing cartilage, potentially weakening the repair and inviting re-injury.

Plus, post-operative cartilage is trying to repair itself in a less than ideal environment.

Scientists have long observed in the laboratory that cartilage responds positively to physical pressure. Physical pressure is currently used therapeutically to help healing in post-operative joints.

Likewise, in the lab scientists discovered that physical pressure created at the cellular level by low intensity pulsed ultrasound in the 1.5 MHz range has a beneficial effect on cartilage regrowth, says Dr. Subramanian.

"But," she says, "they found that low intensity pulsed ultrasound at 1.5 MHz did not work in vivo" - in other words, in the body.

Dr. Subramanian hypothesizes that perhaps the ultrasound did not reach the intended target, or perhaps it reached the target but not at the correct frequency or amplitude to be therapeutic.

While at the University of Nebraska at Lincoln, Dr. Subramanian began to look at low frequency pulsed ultrasound therapy "from the ground up" by experimenting with cartilage harvested from slaughterhouse cattle knees.

In vitro, she discovered that 5 MHz is a more effective frequency for the technique and that ultrasound-grown cartilage did not create the weakened transitional divide between it and existing cartilage that is seen in other techniques.

"When you apply the ultrasound, this divide won’t exist," she says.

Under the NIH grant, she is studying the composition and density of the various cell layers that surround the knee in rabbits and the effect ultrasound has on different cell layers, using very highly detailed Magnetic Resonance Imaging (MRI) scans of the joint.

"This is where it is very helpful that I am an engineer. The first thing you have to understand is how the ultrasound will propagate in the joint," Dr. Subramanian says. "We will reconstruct the properties of the knee on the computer. Then using a transducer, we will model the propagation of the ultrasound on the computer."

The rabbit knee will be MRI scanned and 3-D computer modeled, and the effects of ultrasound on the different tissues and structures will be added to create software that will show a clinician the best route by which to target cartilage in need of regrowth help, and at what intensity.

"Then we will take a rabbit and create a defect, and apply the ultrasound for three months, and then look at the effect" versus a control animal, she says. If that’s successful, the next step is testing in sheep, and then in humans.

Could the day come when a surgeon takes an MRI of a knee, and the computer software tells the doctor how much and where to apply low intensity pulsed ultrasound for optimal post-operative cartilage regrowth and healing?

"Right now, we are in the computer modeling stage, and the NIH grant will fund us through the early animal experiments," says Dr. Subramanian. "Everything the surgeon is facing right now – everything we need for repair — we have shown in vitro. But in vitro is one thing, in vivo is another. Will it work in vivo? That is what I am after."