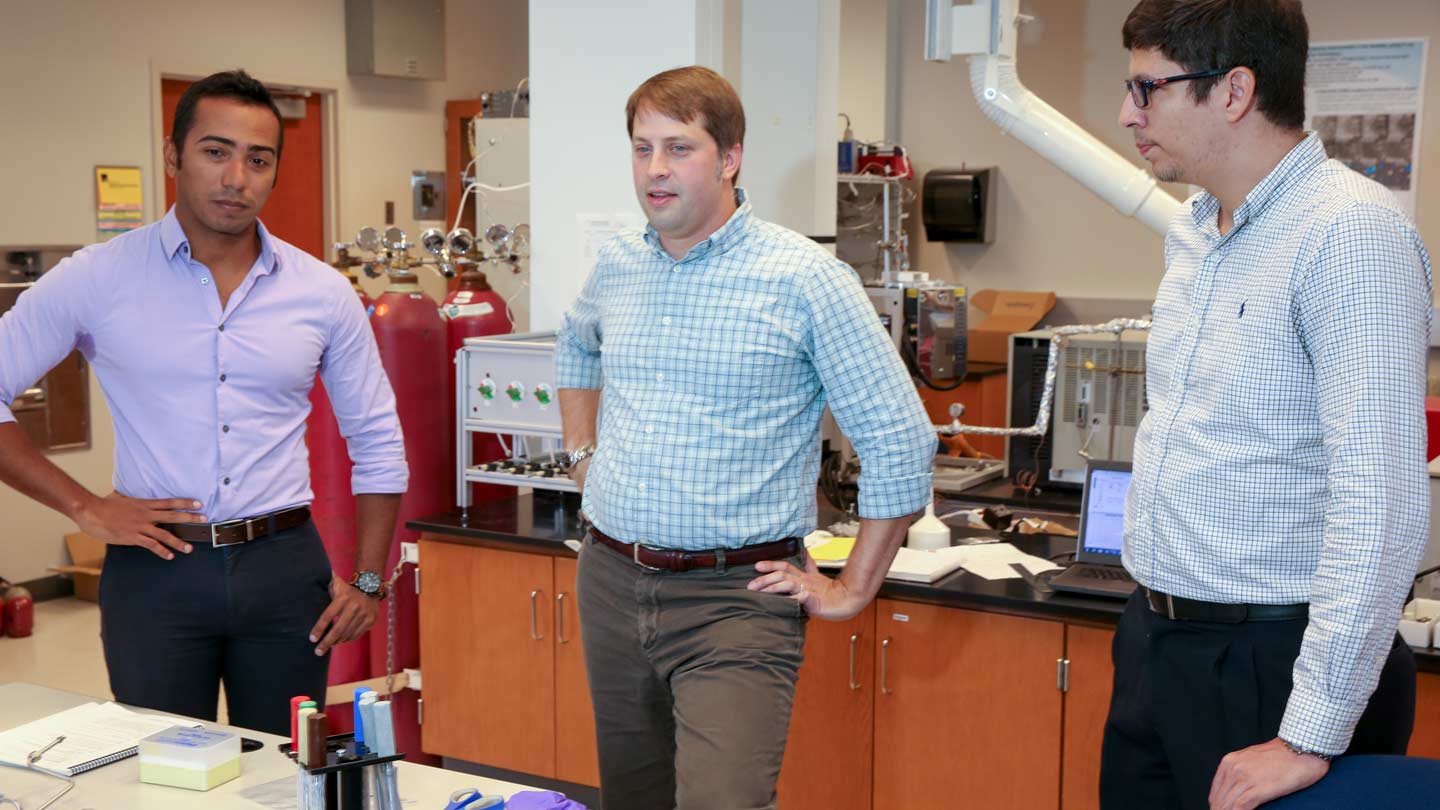 Dr. George Nelson, center, with doctoral students Hernando Gonzalez Malabet, left, and Victor Fontalvo in the Multiscale Transport and Energy Conversion lab on the third floor of the Shelby Center for Science and Technology.

Longer life and increased capacity for a new technology battery that could be the workhorse of a renewable energy grid are the goals of a study of the effect of charging cycles on the structure of anodes in sodium ion batteries.

Under a three-year, $233,000 grant from the National Science Foundation (NSF), a team led by Dr. George Nelson, an associate professor of mechanical and aerospace engineering at The University of Alabama in Huntsville (UAH), will use X-ray diffraction and multiscale X-ray imaging to study changes in the microstructure of the tin-based anodes –also known as negative electrodes – that affect the battery’s longevity and storage capability.

"As with most batteries, there is a desire to increase the capacity of sodium ion batteries. Unfortunately, high capacity battery materials like tin expand a lot when fully charged with sodium," says Dr. Nelson.

"We're using a combination of experiments and numerical models to understand exactly how these changes affect battery performance, so future battery engineers can design the materials and microstructures to make better sodium ion batteries," he says.

Experiments include electrochemical testing, X-ray diffraction to characterize crystal structure of electrode materials and in operando X-ray tomography. These experimental methods will be coupled with mesoscale computational studies of sodium ion battery electrode microstructures. The research will provide insight into the interactions between microstructure, chemistry and performance in sodium ion batteries.

"In a way, it is a continuation of work that we did on tin-based anodes for lithium ion batteries," Dr. Nelson says.

"Hernando has been in my lab for a couple years, and he is partially supported by the project while he trains Hosna on some of our techniques. Hosna is a new student in my group," Dr. Nelson says. "There is also funding on the project to support undergraduate researchers, and I am in the process of hiring one or two undergrads. My latest group of undergrads is graduating, so I am looking to bring on new researchers."

While not ideal for portable applications like mobile electronics or electric vehicles, sodium ion batteries are well matched to stationary applications like storage of electricity produced by solar and wind power. The current grant is the third the NSF has awarded Dr. Nelson since 2014, for a total of approximately $950,000.

"It is part of a collaborative effort with a research group led by my collaborator, Dr. Partha Mukherjee from Purdue University," Dr. Nelson says. "As part of the project, we plan to work with scientists at Argonne National Laboratory on X-ray imaging. We plan to perform our first X-ray imaging experiments, in operando X-ray microtomography, this spring semester."

The research is also important because an expanding array of applications and concerns about sourcing and disposal could limit lithium as a battery raw material in the future.

"Lithium ion batteries are great for energy storage, especially in mobile applications like phones, laptops and electric cars," says Dr. Nelson. "However, if we create an electric vehicle fleet, continue expansion of mobile electronics and build large grid scale batteries all based on lithium ion technology, we could put serious pressure on global lithium supplies. Sodium is Earth abundant, and sodium ion batteries have energy densities that are well suited for grid-scale storage."

Additionally, sodium ion batteries have been developed that could be broken down and disposed of in a standard landfill, alleviating a hazardous waste disposal problem inherent with lithium.