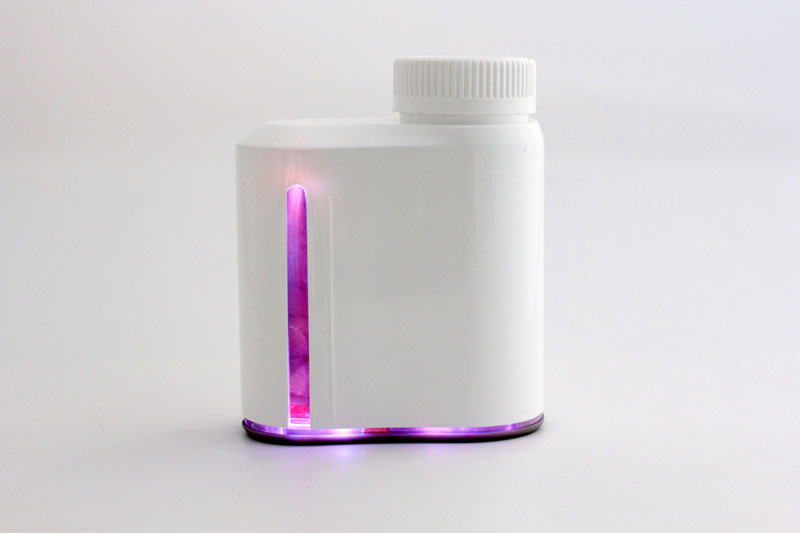 A smart pill bottle patented at The University of Alabama in Huntsville is soon to begin clinical trials.
Courtesy Adhere

HUNTSVILLE, Ala. (Aug. 8, 2013) - Patented at The University of Alabama in Huntsville, (UAH), a smart pill bottle that notifies you to take your medications or reminds you if you missed a dose could be en route to medicine cabinets as soon as 2015.

Weill Cornell Medical College in New York City, a Cornell University college, has been awarded a $100,000 grant from the New York City Economic Development Corp. and Mayor Michael Bloomberg's administration for a clinical study to test the effectiveness of the smart pill bottle on drug adherence in HIV-positive patients. It was one of 10 partnerships to win an inaugural PILOT Health Tech NYC grant.

The smart bottle is made by AdhereTech, a startup firm that licensed the technology from UAH, which holds an equity position in the company. The technology was invented by Dr. Emil Jovanov, associate professor in UAH's Electrical and Computer Engineering Dept.

For 12 weeks, the New York trial is scheduled to follow 70 HIV patients with medication compliance difficulties who are being treated at Weill Cornell. Each patient will receive adherence counseling, but only half will also use the smart pill bottles.

The patented technology uses a sensor in the bottle to detect when the bottle has been opened and calculate the number of pills or amount of liquid remaining. The information is wirelessly transmitted to the cloud, from which a patient can be notified by phone, text or email. Patients can also be reminded by a blinking light and sound from the bottle itself.

AdhereTech impressed us from the very beginning with their passion, energy and great ideas. We have been helping them with maturation of the product and we are very excited to see the first clinical deployment of the system.

"That opens up incredible opportunities. For example, your physician could know how compliant you really are and adjust therapy accordingly, or your pharmacy could prepare refills automatically, and the device can prolong independent living for the elderly," said Dr. Jovanov. "AdhereTech impressed us from the very beginning with their passion, energy and great ideas. We have been helping them with maturation of the product and we are very excited to see the first clinical deployment of the system."

AdhereTech is on target to have 1,000 test bottles ready this fall for the Cornell tests and also for trials in a population of type 2 diabetes patients that will take place at Walter Reed National Military Medical Center in Washington, D.C., said company CEO Josh Stein. Clinical trials will continue through the winter.

"We are extremely fortunate to be working with Weill Cornell Medical College and Walter Reed, two of the best research institutions in the country," Stein said.

The clinical trial grant comes on the heels of a $50,000 grand prize AdhereTech won in May at the Healthcare Innovation World Cup in New York City, the international diabetes innovation challenge funded by pharmaceutical maker Boehringer Ingelheim and organized by HITLAB.

AdhereTech grew out of classroom exercises that Stein performed at The Wharton School of the University of Pennsylvania. The initial concept was quite broad - simply a pill bottle that could tell you when to take your dose. "Once we had that idea, we began to do an online search to see if anyone had already patented an intellectual property like that," Stein said. "It was really an organic process."

They found the UAH patent on Dr. Jovanov's device and began negotiations about licensing it.

"This was a very good partnership for the university," said Kannan Grant, director of UAH's Office of Technology Commercialization, who was involved with the licensure agreement. "The university's interests are aligned with their company."

AdhereTech funded additional work at UAH to develop a more advanced prototype, Grant said. Once that was complete, Stein wrote a business plan and attracted some funding to launch. The company is actively seeking investors and partners at www.adheretech.com.

"It's still very early in the process" and "right now, we are keeping ourselves very open and flexible" as far as initial applications for the device, Stein said. AdhereTech is primarily seeking a partnership with a large pharmaceutical company - like a specialty pharmaceutical company that distributes HIV medications - to use the AdhereTech bottle. "One main goal," he said, "is to have such a product in our bottles."

Cardiac patients being discharged from medical centers are another target market, Stein said, since the Affordable Care Act's Hospital Readmissions Reduction Program reduces payments to hospitals with excessive readmissions. "Hospitals can discharge a heart patient from the hospital with medicine in our bottle to decrease readmissions from people missing their medications."