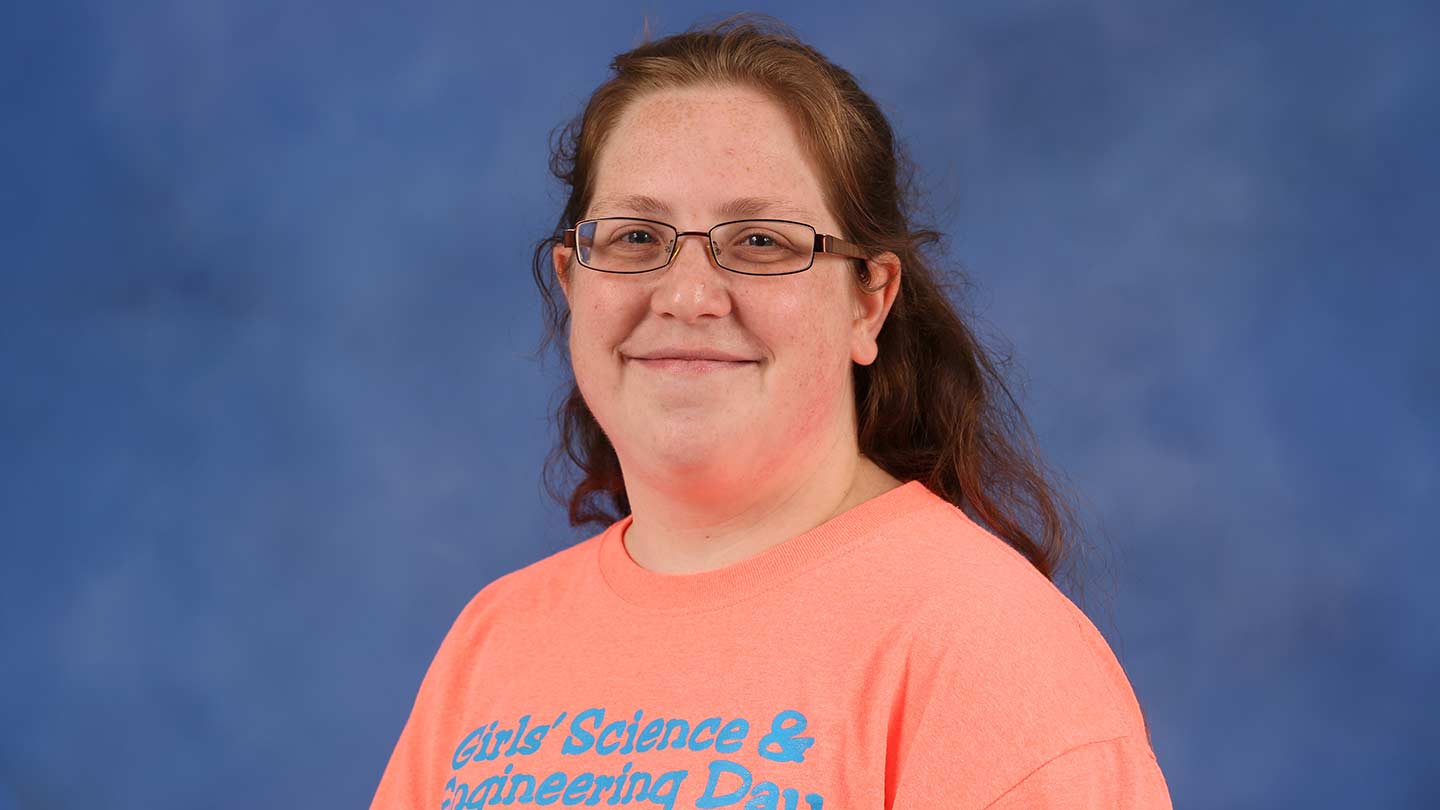 Deanna Phillips, a Ph.D. candidate in planetary science, is studying moonquakes in an effort to better understand the Moon’s structure and how it was formed.

Stargazing may have been the inspiration behind Deanna Phillips’ decision to earn her Ph.D. in planetary science at The University of Alabama in Huntsville (UAH). “In a small town, I have a huge appreciation for the stars,” says the Peyton, Colo., native. “You can actually see them!” These days, however, her focus is on the Moon – and more specifically, on the Moon’s seismology.

“Seismology studies the propagation of waves throughout a medium in order to detect the internal formation of a body,” says Phillips, who also earned both her bachelor’s and master’s degrees from UAH’s Department of Physics and Astronomy. “From studying earthquakes, we understand the layers of the Earth and how it was formed. Now we can start to do that for the Moon by studying moonquakes.”

Phillips was first introduced to the topic of moonquakes by her undergraduate advisor, Dr. Richard Miller. “When I asked about working with him, he recommended me to Dr. Weber, who was working on moonquake data,” she says, referring to planetary scientist Dr. Renee Weber, who serves as manager of the Heliophysics and Planetary Science Division at NASA’s Marshall Space Flight Center. “I had no idea what any of it meant – I hadn’t taken any earth science classes since middle school! But I loved working on with moonquakes, so I learned along the way.”

She ultimately wrote her master’s thesis on the topic, earning second place in the graduate category of the physical and liberal sciences division of the 2016 Wernher von Braun Memorial Symposium with her poster entitled “Enhancing the Science Return of Lunar Surface Studies: Analysis of Rediscovered Data from Apollo 17’s Lunar Seismic Profiling Experiment.”

Now, Phillips’ doctoral research involves digging deeper into these data, which were collected by instruments that were deployed on the lunar surface by astronauts on Apollo 12, 14, 15, 16, and 17; collectively, these instruments are referred to as the Apollo Lunar Surface Experiments Packages (ALSEP). After the program ended in 1977, part of the data went missing until 2010, when a team of researchers known as the ALSEP Data Recovery Focus Group tracked down the tapes the data were stored on and began to digitally scan and catalog them. She is primarily using data from Apollo 17’s Lunar Seismic Profiling Experiment (LSPE) and Lunar Surface Gravimeter (LSG), which provide insight into thermal moonquakes and deep moonquakes, respectively. 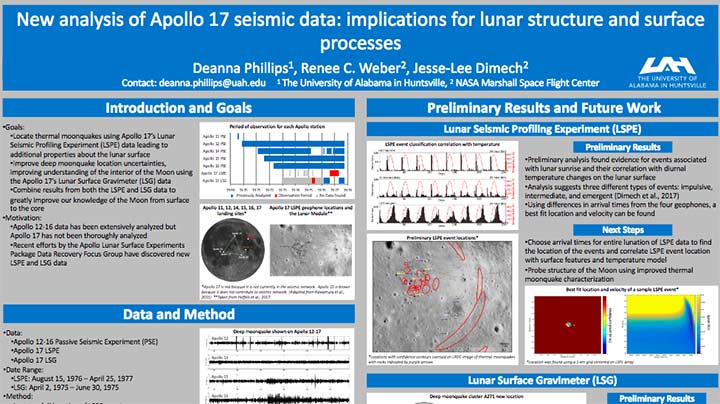 Phillips’ poster summarizes her analysis of the Apollo 17 seismic data and its implications for lunar structure and surface processes.

“The data show that there are moonquakes, similar to earthquakes, and that there are several different types,” she says. The most common type, deep moonquakes, occur at about 800 km in depth and are mainly caused by the interaction between the Earth and the Moon. Thermal moonquakes, meanwhile, are caused by thermal fluctuations on or near the surface of the Moon and are due primarily to the day/night cycle. “My goal is to locate thermal moonquakes using LSPE data,” she says, “and to resolve deep moonquake location uncertainties using LSG data.” By combining the results from both data sources, she continues, “we can determine a more precise location and depth of moonquakes and a better structure model of the Moon can be made. That will allow scientists to better understand Moon formation.”

To fund her research, Phillips was recently selected for a 2018/2019 NASA Earth and Space Science Fellowship (NESSF). The prestigious fellowship includes a $45,000 award and can be renewed for a total of three years. “I didn’t think I’d get it – in the planetary science division, only 24 were selected from 223 applicants,” she says. “So to receive three years of funding to finish my Ph.D. and fulfill my lifelong dream? It’s incredible. I really don’t have the words.” She plans to wrap up her analysis of the LSPE data this year before moving on to the LSG data next year, after which she’ll combine the two for her dissertation. “My NESSF will allow me to have a better understanding of the Moon from the surface to the core,” she says.

It will also prepare her for the next frontier in planetary seismology – Mars. “Planetary seismology is often synonymous with lunar seismology because this is the only data we have,” she says. “But by understanding the Earth, we can understand the Moon, and by understanding both of those, we can understand Mars.” NASA has already launched a mission to the Red Planet – InSight – that will land in November. “It has a very sensitive seismometer that can measure marsquakes,” she says. “The quality of the signal won’t be as good as the Earth’s because of the lack of seismic instrumentation on Mars, but because Mars doesn’t have a fractured mantel like the Moon, the signal quality will be better than the Moon’s leading to information about the Martian interior.”

No matter how far into the cosmos her research may take her, however, Phillips knows she still has an important role to play here on Earth. “In my small town there wasn’t a lot of exposure to the STEM fields, so when I went to my guidance counselor to say I wanted to do astrophysics, I was told I wouldn’t be able to make it,” she says. “To now have two degrees on the wall and to have received this highly prestigious fellowship, it’s incredible. I want to be an inspiration. I want to be able to say to other people, follow your dreams.”