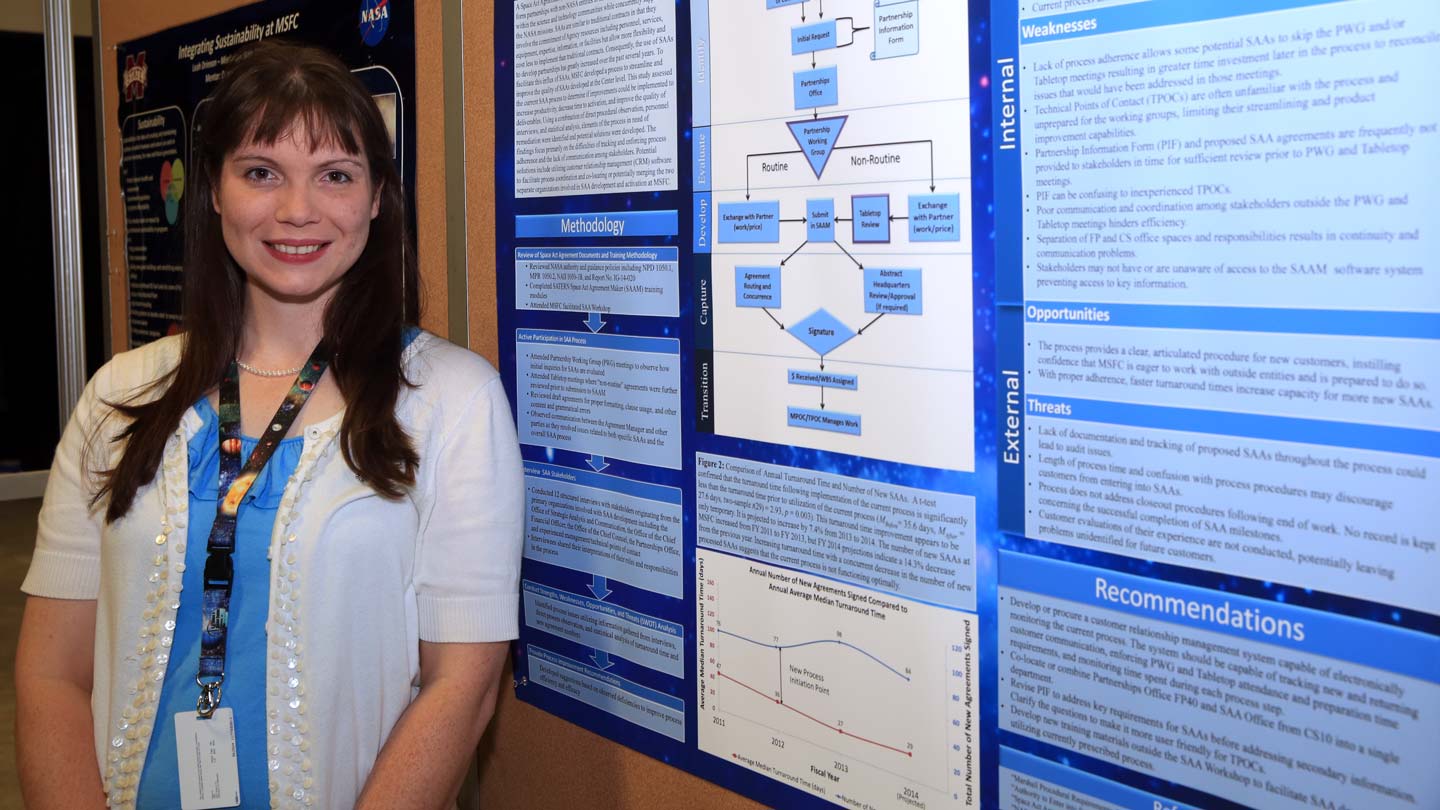 Rachel Daugherty, graduate student in business administration, with her poster, “Assessment of MSFC’s Process for the Development and Activation of Space Act Agreements.”
Michael Mercier | UAH

HUNTSVILLE, Ala. (Aug. 6, 2014) - Six students from The University of Alabama in Huntsville (UAH) have graduated from NASA summer internships at Marshall Space Flight Center. 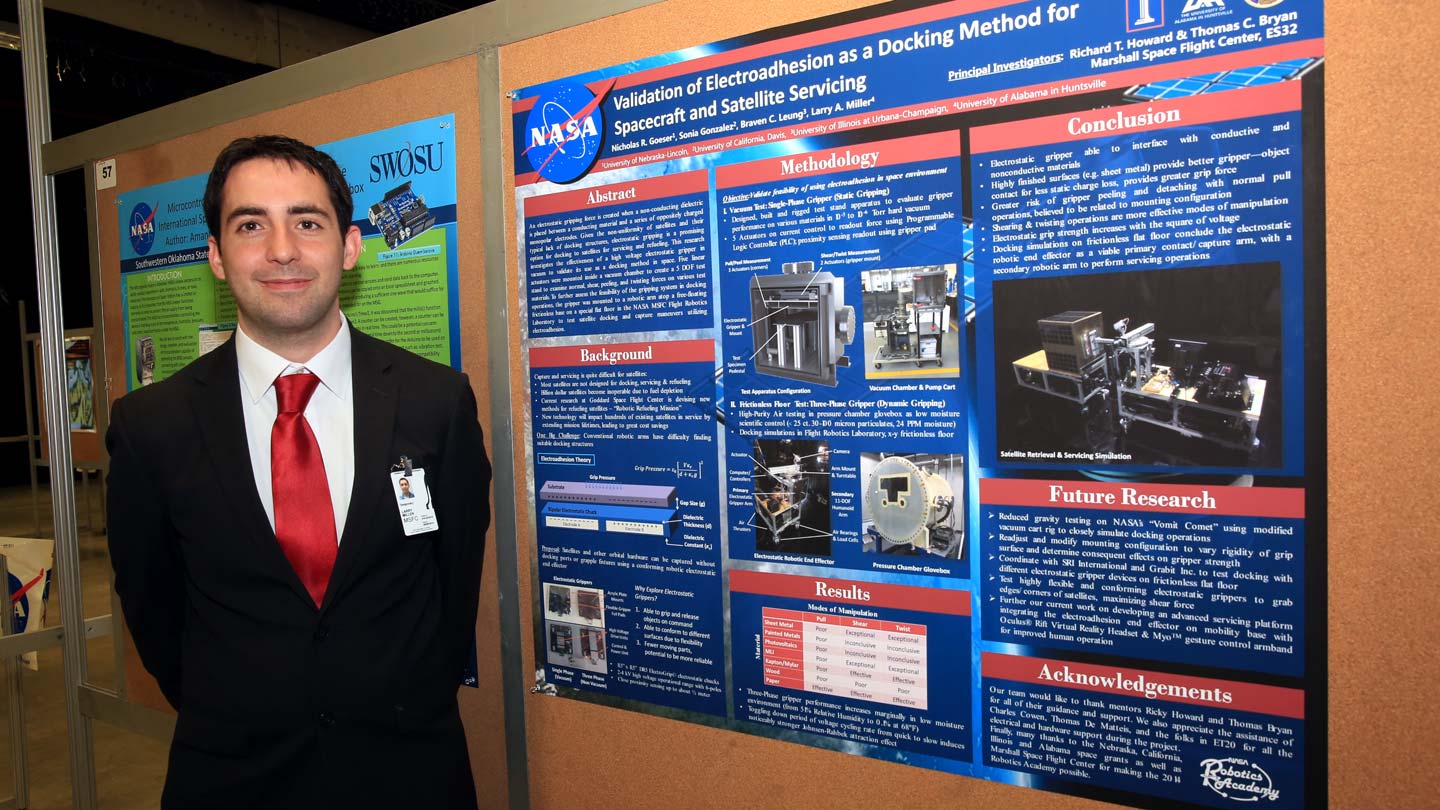 Larry Miller, electrical engineering undergraduate, and his poster, “Validation of Electroadhesion as a Docking Method for Spacecraft and Satellite Servicing.”
Michael Mercier | UAH

The Alabama Space Grant Consortium (ASGC) at UAH managed three summer internship programs for MSFC: the NASA Academy, the NASA Robotics Academy and NASA Propulsion Academy. Teresa Shurtz is the program manager, assisted by Debora Nielson. Gerald Karr of the UAH Dept. of Mechanical and Aerospace Engineering and the campus director for ASGC, is the dean of the NASA Academies.

"Working for 10 weeks with the Mission Operations Laboratory here at Marshall Space Flight Center has been a spectacular opportunity to support and learn about modern human space flight endeavors," said McFerrin, who is from the Birmingham area and spent the summer in the Mission Operations Laboratory's Payload Operations and Integration Center (POIC), which provides continuous support of payload operations aboard the International Space Station.

"My job this summer primarily involved the revision of payload training materials," McFerrin said. "These provide detailed payload specific and operational increment specific knowledge to the flight controllers at the POIC. In doing so I collaborated with operations leads assigned to the individual payloads. 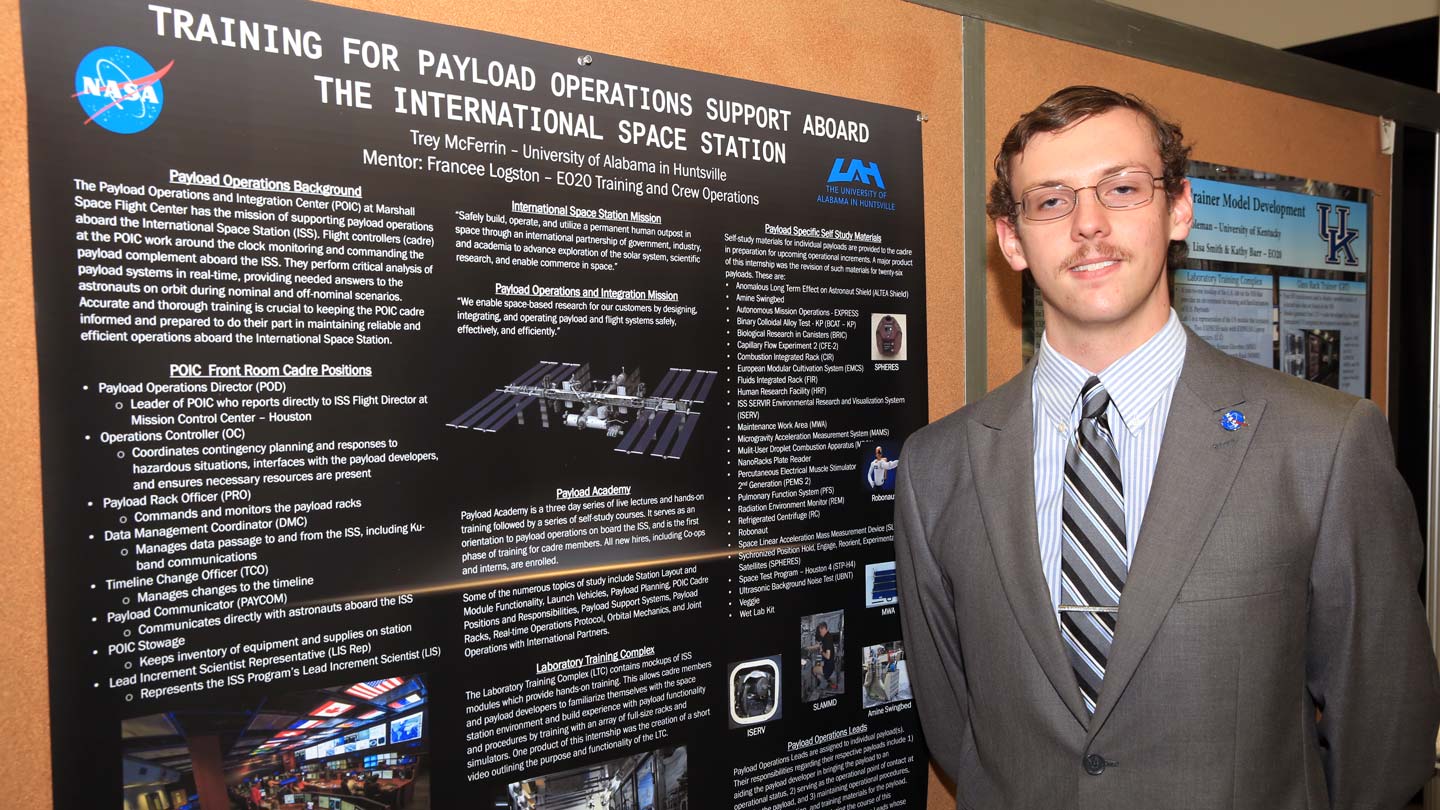 "My undergraduate education at UAH has been crucial in helping me to hone the critical analysis and technical writing skills necessary to interpret and analyze highly technical and highly detailed documentation, allowing me to quickly begin making meaningful contributions to the team's effort here at NASA's Mission Operations Laboratory. A major insight of this internship involved gaining an improved understanding of the dynamic with which hundreds of people work so closely to support a common goal."

Miller said his interest in space began at age 5, when he checked out a library picture book with photos of outer space.

"I had this crazy unrealistic dream to work for NASA one day and set my goal on doing that ever since," said Miller, who is from Huntsville. "I worked at Space Camp a few years ago and that further ignited my passion for the space program. I decided to apply for the Robotics Academy at Marshall Space Flight Center after getting a little research experience under my belt, and I feel very fortunate to have been accepted and got to go through this wonderful program."

His summer experience proved to be motivational. 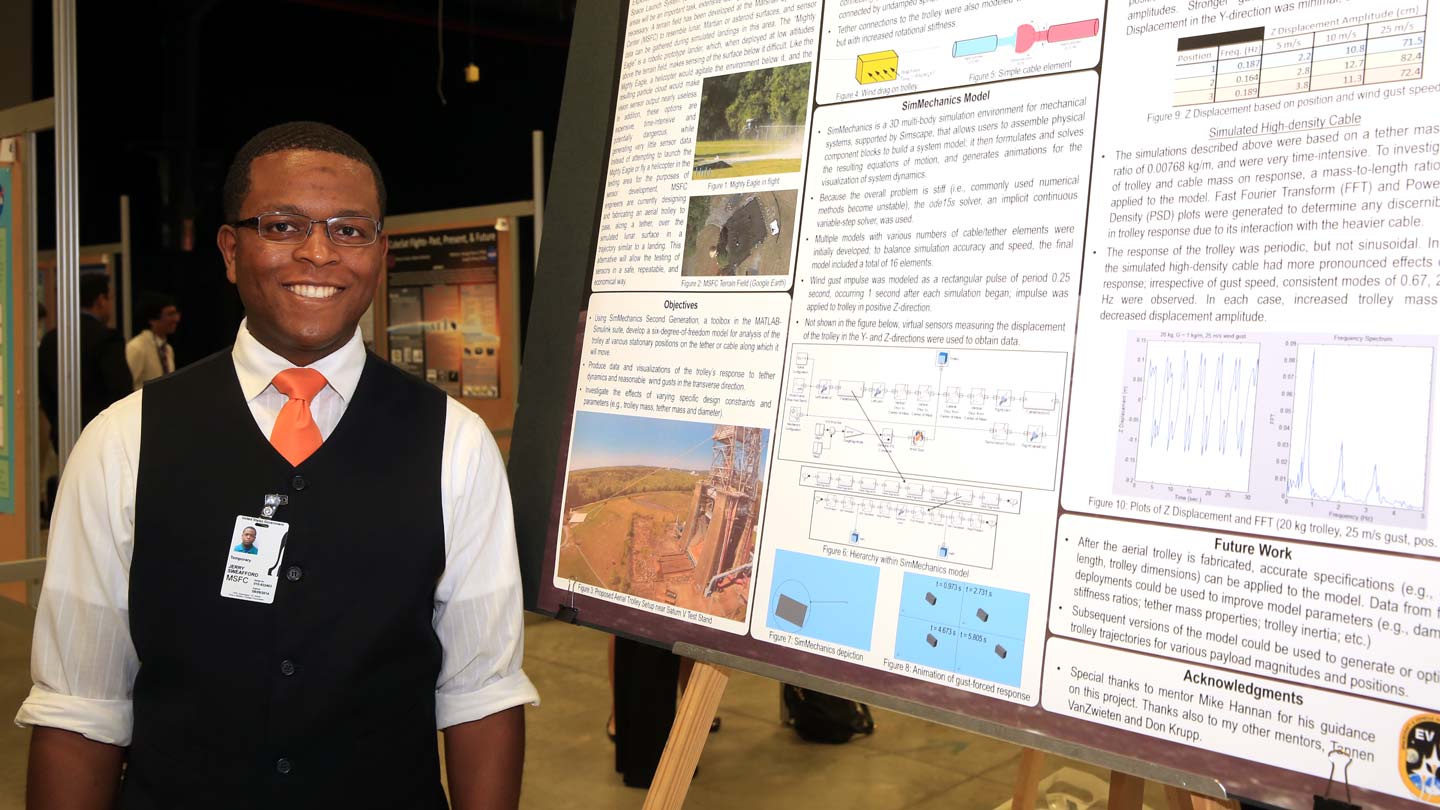 "The most exciting part of this was getting to work in a team where everyone shared the same passion about space exploration that I had. It was very cool to be sent all over the country as well and see all the latest work and technologies dealing with robotics," Miller said. "I've always had an interest in robotics, but getting to travel to Kennedy Space Center, Carnegie Mellon and all over the Los Angeles area this summer and getting a first hand look at all the exciting new work being done with robotics was wonderful and definitely has driven me more in that direction. I know for certain I want a career in this fast growing, exciting field."

Gurley native Daugherty said her participation is proof that NASA has a wealth of opportunities for students from all backgrounds, not just engineering. 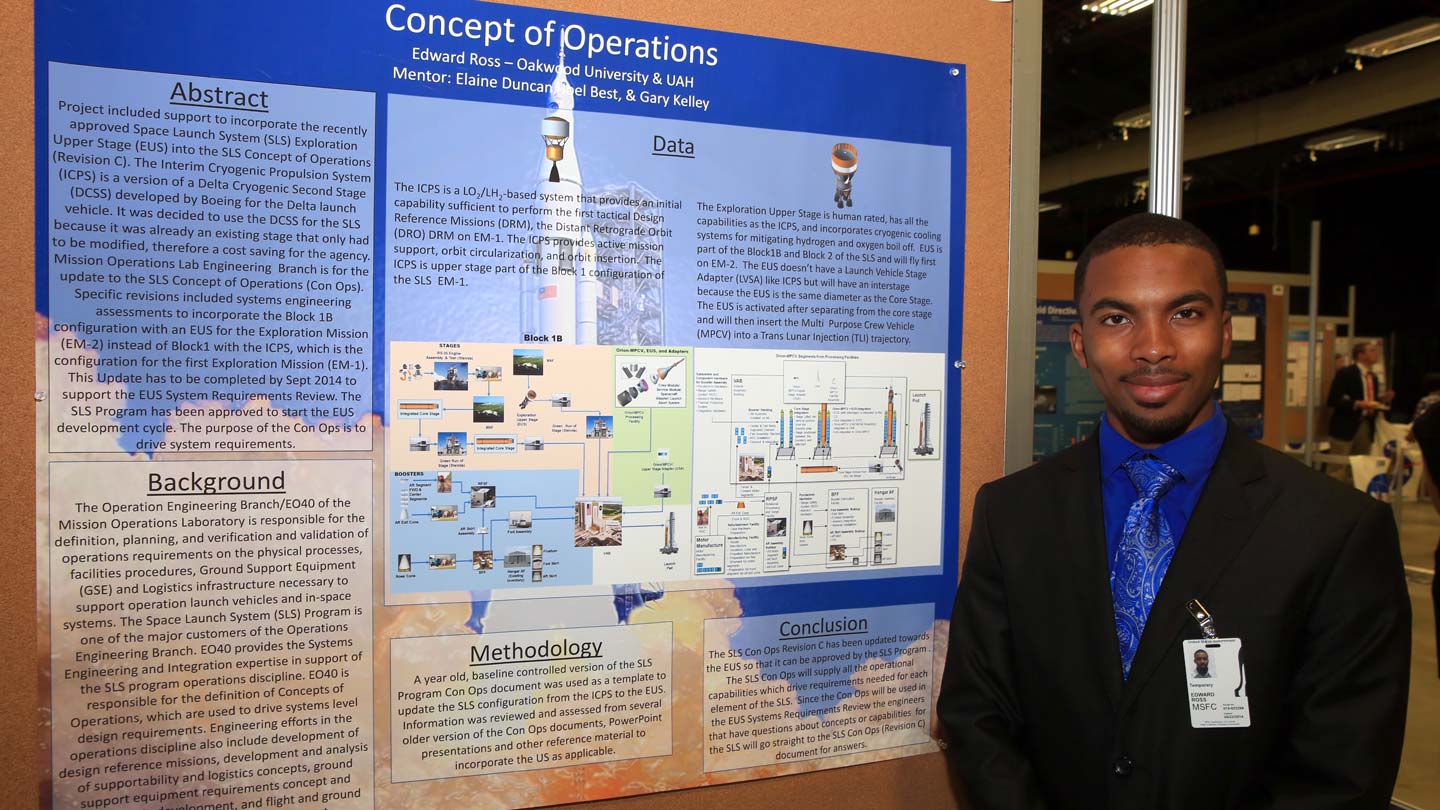 "I had the opportunity to participate in the NASA Academy, which is an extension of the internship program,' Daugherty said. "In addition to conducting research with our principal investigators, we had the opportunity to visit several of the other NASA centers throughout the U.S. We visited NASA Headquarters in Washington D.C., Goddard Space Flight Center, Kennedy Space Flight Center, Armstrong Flight Research Center, The Jet Propulsion Laboratory, SpaceX headquarters and Boeing Satellite Systems. As part of those trips, the NASA Leadership Academy was able to see all three of the remaining Space Shuttles that flew in space -Atlantis, Discovery and Endeavor."

For Nashville native Sweafford, the internship is helping him to make his future career choice.

"For some time, I've been contemplating the eventual career choice I'll have to make between academia and industry, so this internship has been helpful in giving me a feel for what it might be like to work in industry," Sweafford said. "NASA is currently working on the Space Launch System (SLS), which will be the largest rocket in history. The eventual goal for the SLS is to take humans to Mars. Even if I don't end up working for NASA again after this summer, it is rewarding to be able to say that I did some work to help in that effort." 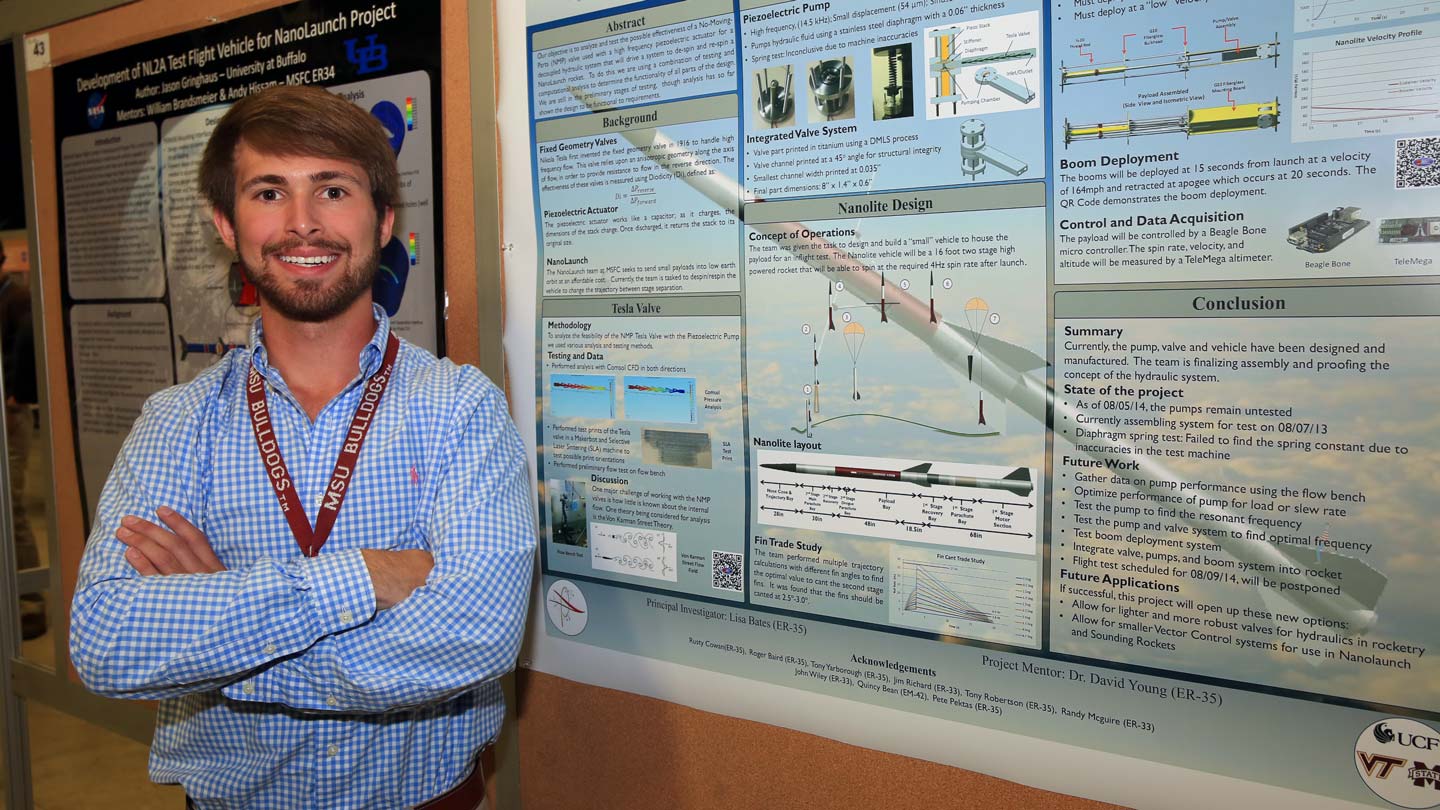 The summer internship at the Marshall Space Flight Center was attractive simply because it's NASA, Sweafford said. "But also, because there were opportunities offered specifically in the area of dynamics and control, which happens to be my area of study and interest," he said. "We've been involved in several interesting things at Marshall this summer. For example, we had the opportunity to meet two astronauts who recently came back from the International Space Station. As they discussed their experiences in space, their excitement and passion for space was infectious. I think everyone in the audience wanted to go to space after that."