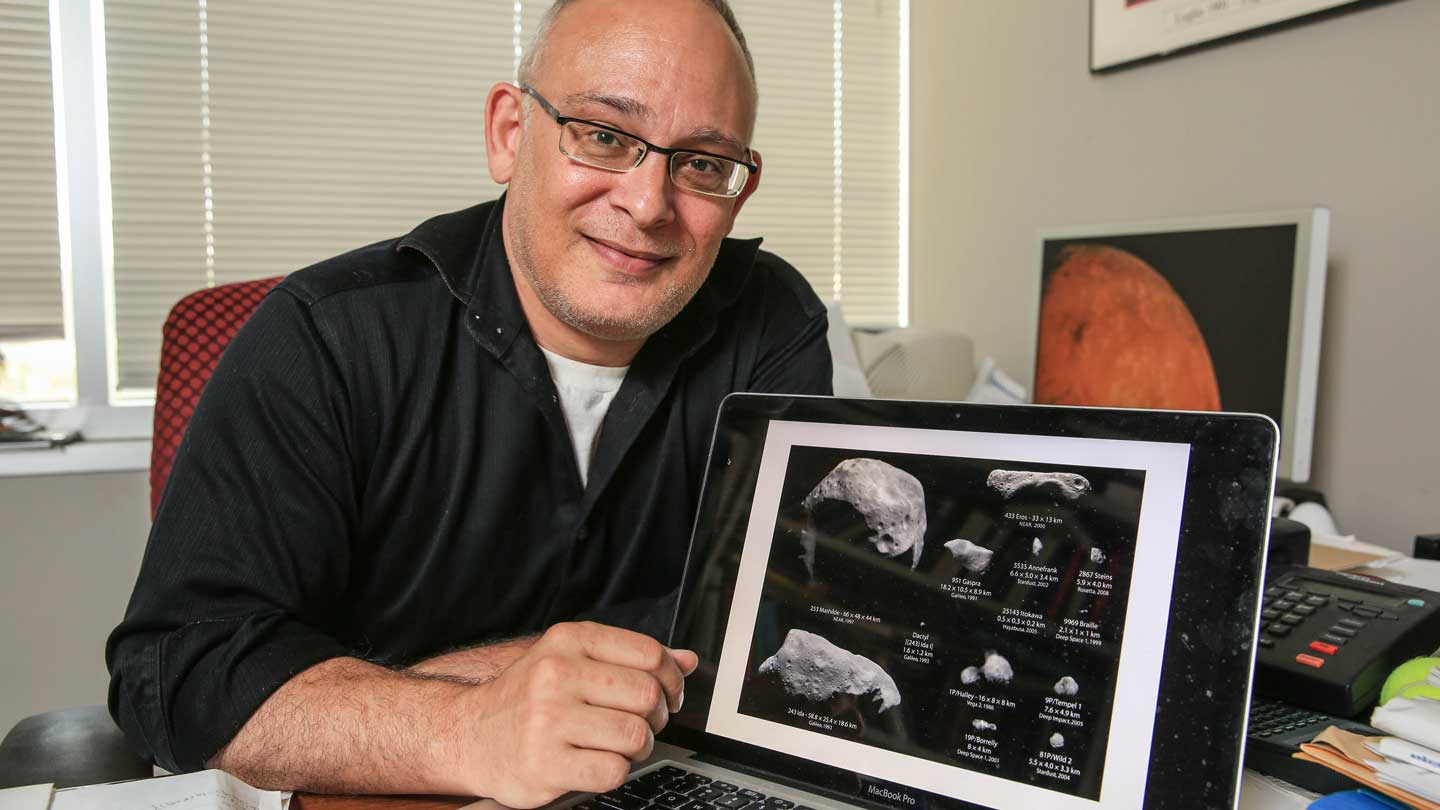 Dr. Richard S. Miller’s research could influence future asteroid mining operations and how we might deal with an impending strike.

Future asteroid mining operations and how we deal with an impending strike could be influenced by research on a potential NASA mission that's being done by team that includes a University of Alabama in Huntsville (UAH) scientist.

"If you identify an asteroid coming toward us, how you deal with it could depend on its density and structure," says Dr. Richard S. Miller, a UAH physics professor. "Likewise, if this technique pans out, you could imagine sending out a specialized telescope to determine what the densities and interior structure of various asteroids are, then decide on the basis of that information what ones to mine."

Little is now known about asteroid interior density and composition. Are they uniform or are they what astrophysicists call differentiated bodies, having denser and less-dense areas?

"Asteroids are time capsules of the early solar system," Dr. Miller says. "We know about their surface properties and we can also infer the mass of some asteroids. But what we want to do is actually probe the interior of asteroids and determine information about their structure, are there interior density gradients, what is the composition - is it solid or like Swiss cheese - and do they have cores or not? Is it a pile of rubble? It turns out this structure can tell us a great deal about the conditions present during the early epochs of solar system formation and its evolution."

What we want to do is actually probe the interior of asteroids and determine information about their structure.

To find that out, the team's scientists will be borrowing imaging technology concepts developed for medicine and high-energy physics. They are developing a mission concept to probe asteroids using a technique similar to human computerized tomography (CT) scans. Dr. Miller is a co-investigator in a collaborative effort with the Planetary Science Institute (PSI), NASA's Johnson Space Center, the Universities Space Research Association's Arecibo Observatory (Arecibo/USRA) and the University of Houston to do the fundamental research and design that could lead to such a mission.

The team proposes using ever-present cosmic rays to perform its measurements. All objects in space are constantly bombarded by these particles, which are thought to be the remnants of massive supernovas and are primarily protons. On Earth, the atmosphere breaks them up and shields us from direct hits.

"In space, on contact with dense matter like the moon's surface or other airless planetary bodies, they interact within the first few centimeters of depth and create a shower of particles," Dr. Miller says. Studying those interactions has provided us surface knowledge of asteroids. "But cosmic rays also contain muons, which are particles similar to electrons, but which can go a lot farther into the asteroid, in some cases up to one kilometer."

The idea is to position a telescope to orbit the asteroid and measure the number and trajectories of the muons passing through it. 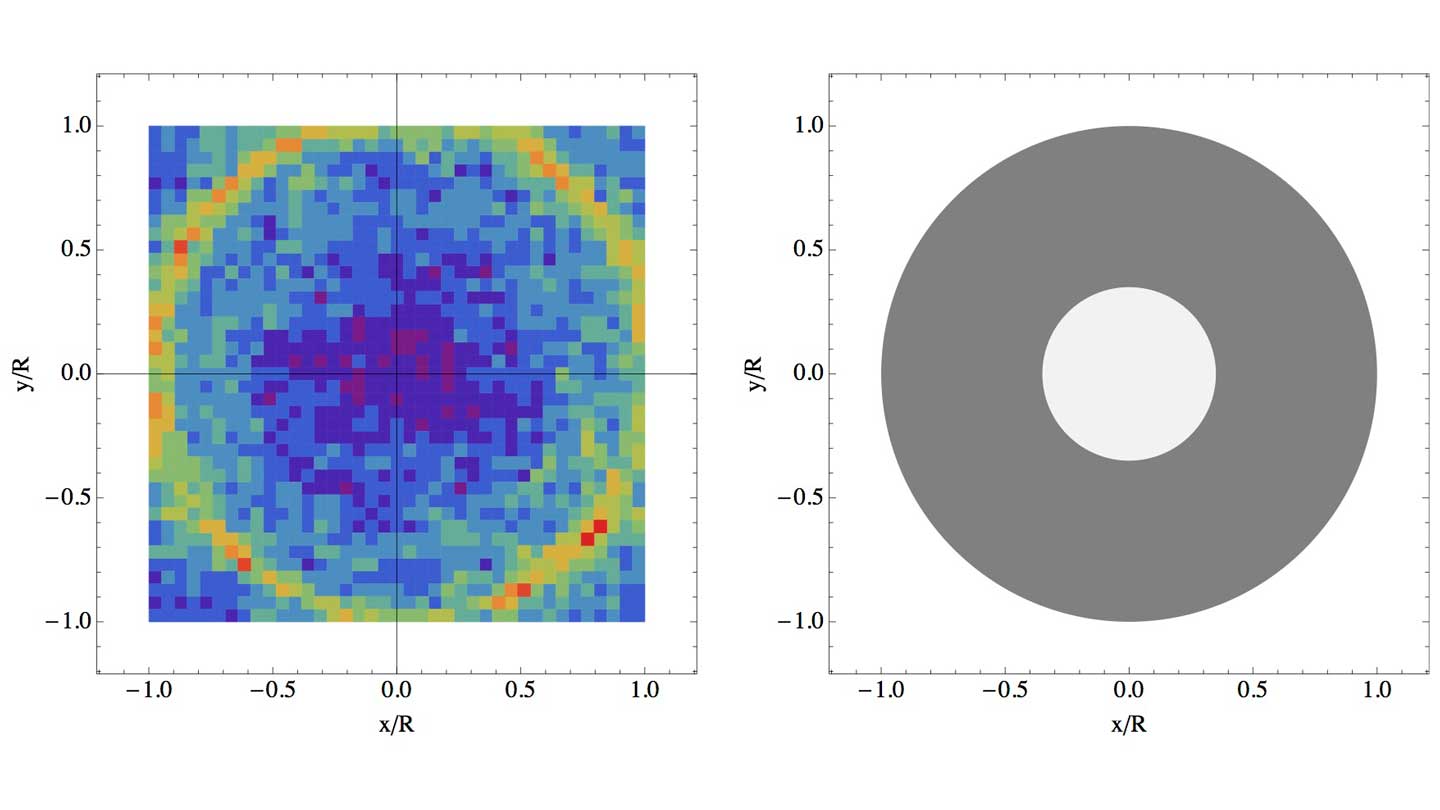 By detecting the number of muons that pass through the object at left, scientists can discover and measure the size of its core, shown reconstructed at right.

"Muons are like an SUV," says Dr. Miller. "Once they are moving it is not easy to knock them off their course."

An asteroid composed of varying densities of material would return a different pattern than one with a single density, just as a CT scan differentiates between densities of structures in the body. Likewise, if an asteroid has a denser core, it will stop muons from passing through and the telescope will detect the change. That process is called muon tomography and is well understood. Developed in the 1950s, it was even used in the 1960s by Luis Alvarez to map the Pyramid of Chephren.

"What's different about a CT scan is that instead of using cosmic rays and muons to determine densities, a CT scan uses x-rays," Dr. Miller says.

To mature the concept, the scientists must first solve a number of fundamental challenges. They'll be using computer modeling to work on:

"What it has to do is detect those muons and give us a direction they are coming from," Dr. Miller says of the telescope, but getting to that goal involves tradeoffs.

For example, the bigger the area the telescope can scan as it orbits, the less time it will take to get results encompassing an entire asteroid being studied. But the greater the telescope's size, the more resources will be involved to launch the mission. Also, to tell where the muons are coming from, the telescope will have to be able to tell directional "up" from "down."

Dr. Miller says he was already exploring using muons to probe asteroids when he attended a conference and found that PSI's Dr. Prettyman was working on the same thing.

"This is a good story of how you had two independent groups who were both looking at the same idea," Dr. Miller says, "and we have joined forces to make a stronger project."