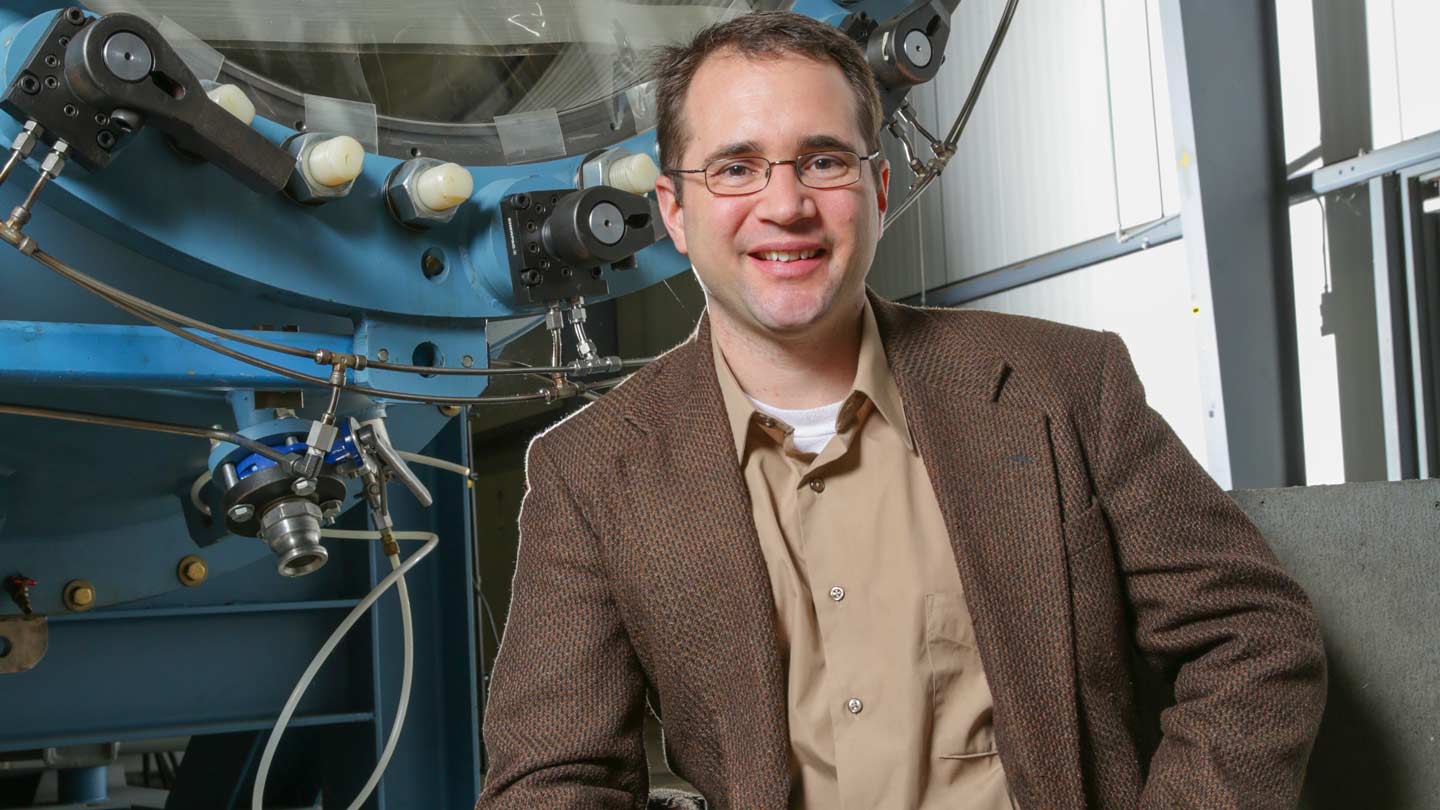 UAH’s Dr. Jason Cassibry, an associate professor of mechanical and aerospace engineering, was a co-author.

You could call a fusion engine a space travel hot rod.

A 2014 paper that reports on developments in pulsed fusion propulsion that could rapidly propel U.S. manned flights to Mars has been named by the American Institute of Astronautics and Aeronautics (AIAA) Nuclear and Future Flight Propulsion Technical Committee as an AIAA Best Paper.

Entitled "Developing the Pulsed Fission-Fusion (PuFF) Engine," the paper's lead author is Dr. Robert B. Adams, who works in NASA's Propulsion Research and Technology Branch and received his master's degree in general engineering in 2000 and his doctoral degree in mechanical engineering in 2008 from The University of Alabama in Huntsville (UAH).

A co-author is UAH's Dr. Jason Cassibry, an associate professor of mechanical and aerospace engineering who is guiding toward completion a repurposed nuclear weapons effects simulator called Charger-1 at UAH's Aerophysics Research Center on Redstone Arsenal so it can perform fundamental research on fusion propulsion.

So, how fast is this hot rod?

We have developed an understanding of what propulsion systems enable missions to Mars in 90 days or less, and to otherwise reduce the trip times to the outer planets and beyond by a factor of three.

"We have developed an understanding of what propulsion systems enable missions to Mars in 90 days or less, and to otherwise reduce the trip times to the outer planets and beyond by a factor of three," Dr. Cassibry says. "Further, we are exploring specific systems which will not break the bank or require more than one to three flights on the Space Launch System or similar other heavy lift vehicle to assemble the vehicle in space. This paper discusses a very promising path for achieving these goals."

Dr. Adams originated the idea of a fission/fusion hybrid approach for the Phase I NASA Innovative Advanced Concepts (NIAC) proposal and performed much of the vehicle design and mission analysis work.

"I did conceive of using a fission trigger to ignite a fusion plasma in the context of a propulsion system," Dr. Adams says. The concept traces its roots to Dr. Freeman Dyson and the Orion Project, a 1957-61 effort that explored using nuclear pulse propulsion for space flight.

"I championed incorporating this two-stage process with a z-pinch," says Dr. Adams. A z-pinch, or zeta pinch, is a plasma confinement system that uses electrical current along the z-axis on a three dimensional graph to create a magnetic field to compress the plasma to release energy.

"The team has generated several other ideas that have been incorporated into the concept," Dr. Adams says. "I'd expect there will be many more ideas from the group before this becomes a reality."

The paper served as a status report and summary of funded work as of July 2014 on the Pulsed Fission Fusion (PuFF) propulsion system, Dr. Cassibry says. "PuFF is a nuclear propulsion approach in which the fuel is compressed by high currents."

In the PuFF system, the electricity compresses a target of deuterium and tritium in a column surrounded concentrically by a liner of depleted uranium. The paper includes a power balance calculation that shows that the presence of a depleted uranium liner makes the hybrid fuel achieve break-even with much less energy input than when using a pure fusion target.

"Three-D modeling was performed to show that pulsed expansion of these targets against a simple hemispherical nozzle could be over 70 percent efficient," Dr. Cassibry says. "Vehicle design and mission analysis showed concepts which could reach Mars in 37 days, and 1,000 astronomical unit (AU) interstellar precursor distances in 36 years."

An AU is equivalent to the distance between the sun and the Earth.

"I see Dr. Cassibry and I as partners leading this team working on fusion propulsion," says Dr. Adams. "He knows much more about plasma physics and computational fluid dynamics, where I bring nuclear engineering and mission analysis to the table. Several others on the team are from UAH and NASA and have expertise in high power physics, plasma instabilities and other topics."