mHealth research at The University of Alabama in Huntsville is lead by Dr. Emil Jovanov, associate dean for graduate education and research in the College of Engineering, and Dr. Aleksandar Milenkovic, associate professor in the Department of Electrical and Computer Engineering. They have recently received funding from the National Science Foundation to develop mHealth infrastructure at UAHuntsville.

mHealth capitalizes on what Dr. Jovanov calls "major revolutions" in computer informatics, smartphones, and energy-efficient and miniaturized electronics and sensors. It can provide health information to the patient directly, to the physician via the Internet, and to researchers as aggregated databases. View the mHealth website at http://portal.mhealth.uah.edu/public/index.php.

"When WBAN is used to monitor diabetes patients using an implanted blood glucose sensor and insulin pump, the system can determine how much insulin should be released, not only based on the blood glucose level, but based on the level of activity and condition of the whole organism," said Dr. Jovanov. "This is a fundamentally different approach made possible by the advances in technology, and we are proud that the first paper on it came from UAH."

Dr. Jovanov said the idea sprang from the Personal Area Network used in wireless computing. "We proposed creating a personal health monitoring network within 2-3 feet from your body integrating a number of sensors to monitor your vital signs and physical activity." Individual sensors are controlled by a smartphone that collects information from sensors and communicates with the rest of the system. 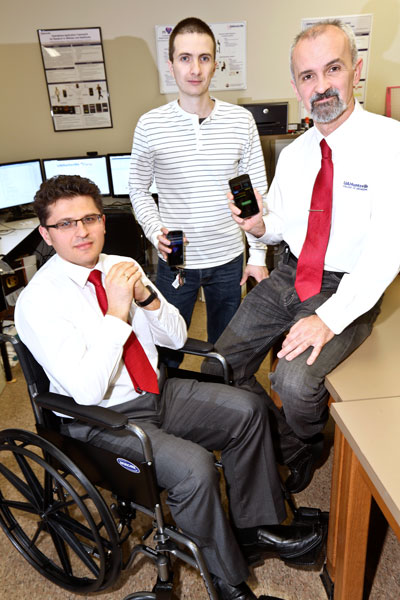 In collaboration with the Mayo Clinic, the researchers developed the first successful prototypes. "We were the first to demonstrate that you can create a system that is a very powerful, energy efficient and comfortable that you can wear a long time," said Dr. Jovanov.

Since then, size and weight have shrunk and sensor and communication technologies have advanced. "It is ubiquitous wireless communication anytime, anywhere that has brought tremendous change and will improve our lifestyles tremendously in the future," Dr. Jovanov said, citing two examples where mHealth could help.

"The more you exercise, the better you recover after a stroke, but you also can overdo it," he said. "The smartphone-based application can motivate users to exercise more, or warn them if they are straining themselves.

"Now in heart attack, the recovery rate also depends on exercise, but often people are worried about that because they have been through this traumatic event and they don't want to get too far away from the phone or help or they are afraid to be active again," he continued. The mHealth system alleviates fears by its ability to detect trouble and summon help. It also can advise the heart patient when he or she is at the optimal exercise level.

First is a cardiac health monitor that records the change of heart activity every time a user stands up. A sensor in the smartphone detects when the patient gets up and a wireless heart sensor detects heart activity.

In the second, a UAHuntsville-developed program monitors activity of wheelchair users using sensors embedded in the smartphone. A magnet on the wheel allows the smartphone to detect and record the number of wheel rotations so distance, speed and duration of activity can be calculated. Moreover, the system can detect if the user propels the wheelchair or if the chair has been pushed.

"Most wheelchair users do not exercise enough," Dr. Milenkovic said. "Statistics show that they are at high risk for all physical inactivity related diseases, such as coronary disease and diabetes. We can quantify what they do and send that information to the physician."

In 2002, Dr. Jovanov worked with the U.S. Naval Research Laboratory to monitor stress levels of pilots training in Pensacola, Fla. Today at UAHuntsville, the researchers use mHealth to study the stress levels of nursing students.

"It is extremely hard to monitor stress," said Dr. Jovanov. That's why the UAHuntsville College of Nursing study is advantageous. The nursing lab has a patient simulator, a humanlike automated dummy that can reproduce the physiological effects of acute medical events, like heart attacks. As student nurses have stressful encounters with the simulator, the mHealth system monitors their physiology and activity.

"For us this is very interesting, because we know exactly when these crises will happen and we can control the outcome of the event through the simulator," Dr. Jovanov said. Once the stress monitoring is developed, managers could use such a system in hospitals to observe nursing stress and recommend personal relaxation techniques or short break times. As a result, the number of mistakes arising from stress will be reduced.

When WBAN is used to monitor diabetes patients using an implanted blood glucose sensor and insulin pump, the system can determine how much insulin should be released, not only based on the blood glucose level, but based on the level of activity and condition of the whole organism. This is a fundamentally different approach made possible by the advances in technology, and we are proud that the first paper on it came from UAH.

"We are desperately in need of changes to the whole health system. Currently, the emphasis is on reactive health care," Dr. Jovanov said. In that environment, opportunities for mHealth are increasing. As part of the Affordable Care Act, in 2012 Medicare tightened its hospital readmission rule to decrease payments to acute care hospitals with excessive readmissions. "That has created overnight a multi-billion dollar market for home monitoring and an early intervention system," Dr. Jovanov said. "Now we are devising more uses for it."

What is ultimately needed is a proactive system, said Dr. Jovanov. "You can make small changes and affect your health in a major way over time." Dr. Milenkovic calls it "a guardian angel "that could be used to improve a patient's wellbeing.

As health status deteriorates, long term records and information in the electronic health record can help in diagnosis. "Having this information will decrease the amount of needless testing done," said Dr. Jovanov. It also opens the possibility for rehabilitation use, Dr. Milenkovic said. "There is quantifiable information there that is stored and can be analyzed."

High costs have prevented this level of personalized medicine. Hospital-grade monitors typically cost from $5,000 to $15,000 each. Dr. Jovanov and Dr. Milenkovic are expecting to see an emergence of the mHealth monitors in the $50 to $500 price range.

Once mHealth monitors are widespread and generating big data streams, data mining will allow researchers access to information not identified by user, resulting in super-sized studies on topics ranging from heart disease to cancer outcomes.

"We believe that once we have widespread mHealth devices, we will create huge database of records capable of completely changing healthcare," said Dr. Jovanov. "Once you gather enough data, it will tell you how well you are doing for your genetic profile and your age and health, and what to do to improve your health status."