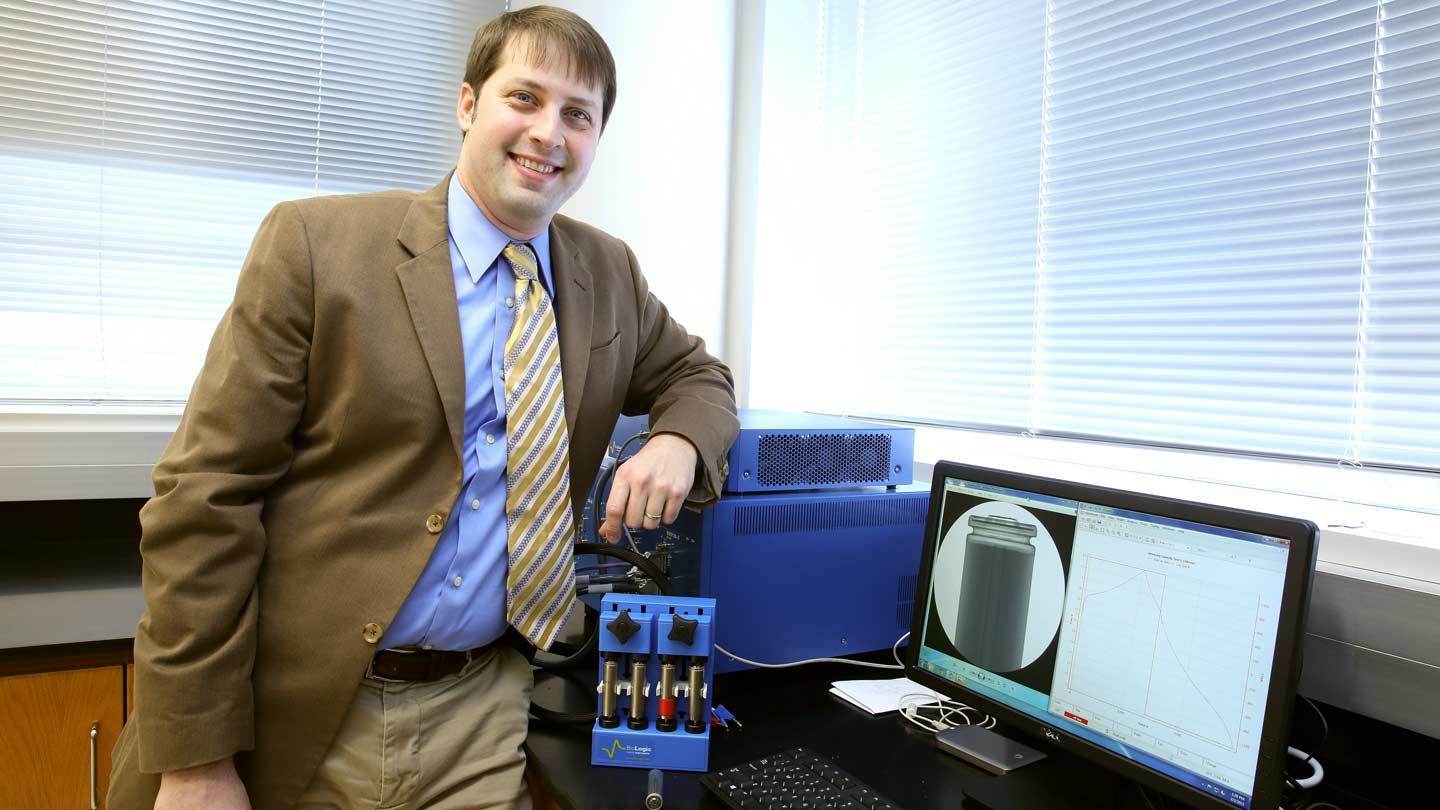 Dr. George Nelson with batteries ready for testing and an x-ray nanotomography result on the computer in his lab at Shelby Center for Technology.

Smaller, lighter electric car batteries that don't have to sacrifice longevity to be petite could be one benefit of basic research into lithium-ion battery nanomaterials at The University of Alabama in Huntsville (UAH).

A $502,000 National Science Foundation (NSF) Faculty Early Career Development (CAREER) Program grant is funding research by Dr. George Nelson, an assistant professor of mechanical and aerospace engineering, into nanomaterial cathodes for the batteries. Nanomaterials may make the trade-off between high battery power and smaller size a more favorable one over the wide temperature variations experienced by cars and other devices.

"There have been a number of studies that have documented the variations in battery lifetime caused by variations in temperature," Dr. Nelson says.

"For example, by parking your electric car in the sun instead of the shade, you could be significantly shortening the life of its battery, by perhaps as much as two years," he says. "If you lost two years of battery life, that shorter lifespan would be the equivalent of another car payment."

So it could cost you another $600-$700 in lost use, just because your battery life was shortened by where you parked.

"This amount of money does have an impact when you multiply it over the entire marketplace," Dr. Nelson says. "One way to overcome shortened lifespans is to oversize the battery by about 10 to 20 percent."

That practice leads to increased use of rare materials like lithium and has environmental impacts when it comes to dealing with the spent batteries, he says. It also increases vehicle cost.

"We're looking at how we can design these batteries more efficiently from the nanoscale up," Dr. Nelson says.

To do that, UAH scientists are synthesizing nanomaterials in the College of Engineering's Transport Reaction and Energy Conversion (TREC) Lab at the Shelby Center for Technology with a goal of understanding how the use of nanomaterials impacts reliability of the battery's cathode at higher operating temperatures. The cathode is the positive terminal of the battery.

Traditionally, cathodes are made of larger materials on the micron-size scale that fit together more loosely than the smaller nanomaterials.

"There are a lot of people pursuing nanoscale battery materials," he says. The benefit of nanomaterials is that they have much greater surface area for the chemical interactions that create electric current, resulting in more power for their size. But that also can be a drawback when it comes to lifespan over a wide temperature range. "We suspect that increased temperature will shorten battery life for these materials, more so than traditional materials."

UAH researchers are charging and discharging batteries made with different cathode compositions at various temperatures and using x-ray nanotomography to observe changes in the cathode structure. Together these studies will help determine which higher-power nanomaterials has the longest lifespan.

Dr. Nelson's CAREER award research complements work being conducted in collaboration with Texas A&M University using the Advanced Photon Source, a synchrotron at Argonne National Laboratory in Lemont, Ill. The collaboration with Texas A&M focuses on interactions between microstructure and lithium transport in novel anodes for lithium-ion batteries. The anode is the battery's negative terminal.

Both projects have attracted letters of support for further research using facilities at Stanford University.

As part of the CAREER grant's educational and outreach programs, a battery experiment sequence for the Undergraduate Heat Transfer Lab is being developed. It will later be adapted to teacher training offered by the U.S. Space & Rocket Center.