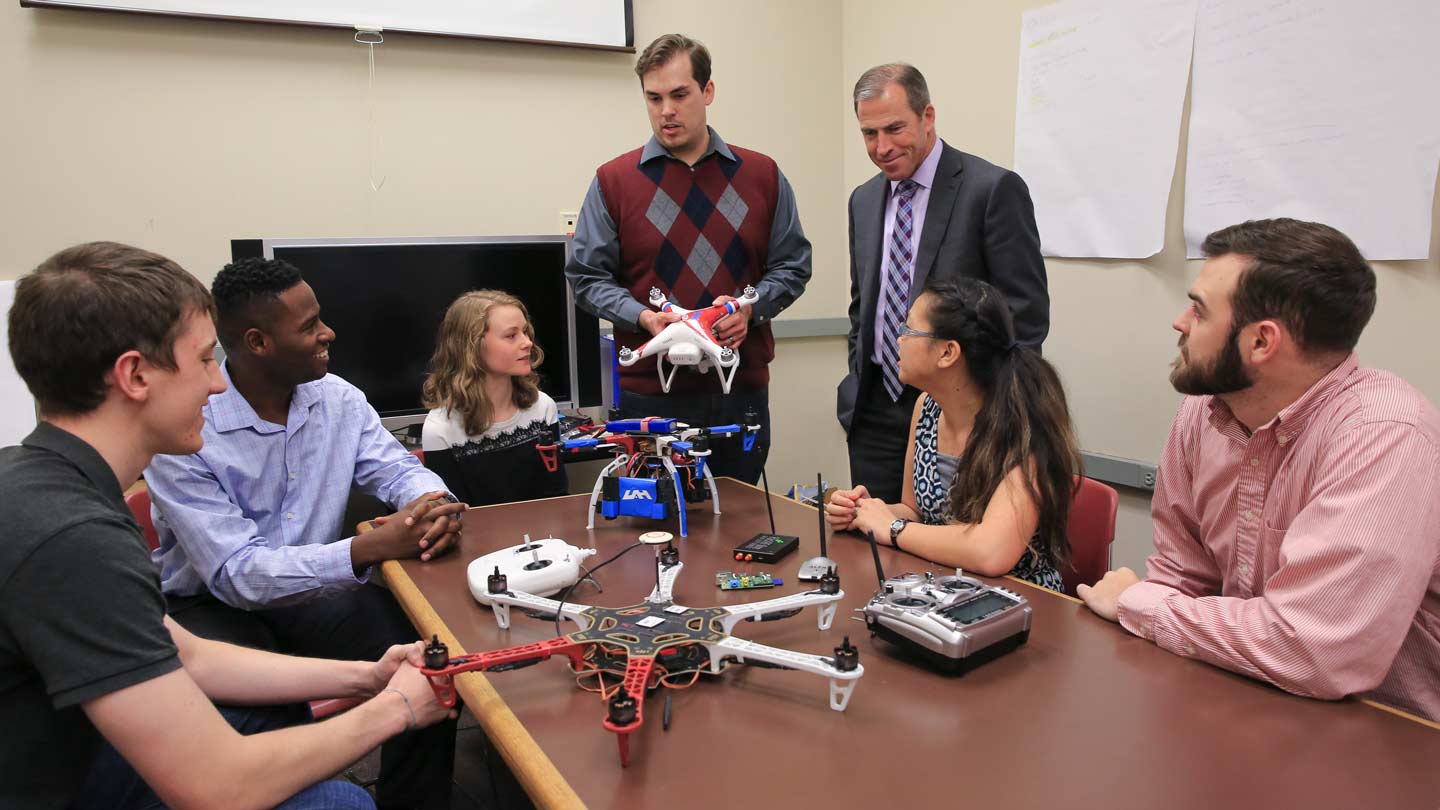 Other than shooting it down, how can you stop an enemy drone from entering a protected zone?

The question was put to a University of Alabama in Huntsville (UAH) senior design class by Northrop Grumman Corp. Answering it has spawned campus collaboration between the class, the College of Engineering, the College of Arts, Humanities and Social Sciences and the Systems Management and Production (SMAP) Center.

The answer sounds right out of WWE professional wrestling – a cyber takedown zone.

"A drone is approaching a pre-defined Keep Out Zone – or KOZ – and it has ill intentions," says William Klingbiel, the project lead, who hails from Colorado Springs, Colo. "We have to keep it from entering that KOZ, but just like in a real-world scenario, the farther from us we can keep danger, the more successful it is."

By using brains over brawn, Klingbeil’s team wants to exploit programming vulnerabilities built into various drone types for the takedown zone. "Each flight controller – and in some cases, each manufacturer – will have different technologies that are used," he says. "Therefore, we have to attack each one differently."

"These are students who are participating in Northrop’s mentoring program, so we set up a design team focusing on a problem that Northrop picked," says Dr. Phillip Farrington, a class advisor who is a professor of industrial and systems engineering.

Northrop Grumman (NGC) is both the primary driver and the customer of the project. Three NGC employees, Mark Thornton, Brian Venson and Brit Bush, are advising the team.

Thornton, who is a Northrop Grumman program manager, was instrumental in developing the goals for the project.

William Klingbeil talks about his senior design class's drone defense strategy for a project done in partnership with Northrop Grumman.

"We challenged the students with emphasis and incentives for the electronic capture or disabling of the drone," Thornton says. "We added a competitive flavor to the project by incorporating a demonstration where an enemy – or ‘red’ – drone is flown into the KOZ. The farther from the center of the KOZ that the students can disable the drone, the more points are awarded to the team. We hope to grow the collaboration with UAH to include multiple teams that would compete in this construct in the coming year."

Dr. Landrum says NGC is also providing materials funding. In addition, Northrop Grumman is mentoring one of the students on a related project for the UAH Honors Program.

"This is a problem Northrop Grumman has been working hard to try to solve itself," Dr. Landrum says. "Normally, we focus on a vehicle with its physical components, like structures, flight controls, propulsion, etc. But this project is different because of the broader considerations of operational concepts, and distributed physical and software components that must work together. This is one of the most challenging projects we have pursued."

"This is engaging Northrop with the students they could very likely hire after they graduate," Dr. Farrington says.

Bob McCaleb, Northrop Grumman corporate lead executive, says it is vital that NGC enable the best and brightest Science, Technology, Engineering and Math (STEM) workforce, as well as being a strong partner in its communities.

"We are delighted about the success of the program and we are excited for the students and for Northrop Grumman," McCaleb says. "We look forward to strengthening our partnership with UAH – capturing the imagination and commitment of bright young talent, helping to foster the next generation of capable minds, maintaining our technical superiority and delivering the very best capabilities in defense of our nation."

Project lead Klingbeil says the team’s presentations have all been at NGC facilities, in front of faculty involved and various NGC employees. "They have also provided us with mentors who attend our meetings once a week and provide any guidance or help us to find our way when we run into trouble."

The students get experience with a project that’s both timely and realistic, says Dr. Farrington.

"It’s a really timely project because you see small UAVs all over now, and some could become a potential threat, and this is to disarm a threat that is possibly hostile," Dr. Farrington says. "It provides a good foundation for the students because when they graduate, it will be very rare that they work in a situation where they are only working with engineers from the same discipline. It is more likely that they will work with both engineers and non-engineers. This creates a realistic situation, a very real-world problem."

"What’s a little different on this project is that this one is the most multiple-disciplinary projects we have ever had," says Dr. Landrum. "That means these students have to learn the language and perspectives of other fields and of other ways of looking at a problem. They have to come together to work on a common goal." That kind of interaction will serve them well when they enter the workforce, he says.

UAH’s SMAP Center is providing use of its enclosed testing area, its 3D printing capabilities and information about flight technologies and various methods SMAP has employed previously to accomplish similar goals. In addition, SMAP will supply the pilot of the threat drone and a test site that will be the location of a live demo in spring.

"Interacting with the various engineering professors has given SMAP greater insight to potential employees and their capabilities required for the various U.S. Army elements that UAH SMAP supports," says Norven Goddard, a SMAP research scientist. "This particular project brings together aerospace engineering, electrical and computer engineering, industrial and systems engineering and engineering management. In a problem-solving environment, the more diverse background of your students, the more robust and creative the solution will be."

SMAP’s experience in operations and logistics has been valuable, says Dr. Landrum, and SMAP will also supply the video documentation for the project. "SMAP really brings a lot of practical operation experience to it," he says.

"One of my favorite aspects of this project is the diversity of degrees in this group," says team lead Klingbeil. "Because we have mechanical engineers, computer programming engineers and industrial systems engineers, we all have different areas of expertise, and thus are working on different tasks. We worked through the various presentations and design reviews last semester, and are currently working on writing the codes and assembling the components."

Computer engineering students Walker and Bernues are working on coding the exploits as well as compiling the codes to work in a single script that's as close to autonomous as possible.

Industrial systems engineers Adams and Buckley are working on creating the test plans and schedules, as well as organizing reports, presentations and any other necessary paperwork.

Mechanical engineers Horvath and Klingbeil are working on designing the hard case the class will create using the 3D printing services at the SMAP Center, along with assembling the components and ensuring the heat, airflow and other physical needs of the equipment are addressed.

The project has posed its challenges, including a misunderstanding about the type of control system the primary target drone would employ. That resulted in a bit of scrambling.

"A couple days before our Critical Design Review, we found out differently and had to completely restart our approach, changing to the one targeting radio frequencies that we are using now," Klingbeil says.

His team presents a review of its solution to NGC for review in March, followed by an April 21 NGC test during a live demonstration at a farm near Gurley. At the end of the semester, a May review with Northrop Grumman is on tap.

"At that," says Dr. Farrington, "they’ll present to Northrop to tell them about the testing and its results, for those who weren’t there, and show videos and wrap it up."

The effort has taught some important lessons, Klingbeil says.

"Personally, my way of approaching problems has completely changed through this project," he says. "My default approach to a problem is what is the most efficient path to the most complete solution. When we proposed the solution that I felt met that goal, it ended up being rejected by the NGC panel. The interest in this project was most certainly in gaining a deeper understanding of drone technology, and what methods can be employed that maybe aren't as obvious."

Klingbeil says the group learned that starting to test as early as possible is a very critical step. "We've been fortunate that we started some of the testing last semester and failed a couple times early on, allowing us to narrow our focus to successful methods this semester."

The risk-reward ratio is off the charts, he says. "The possibility of failure is very small compared to the knowledge gained about the problem."