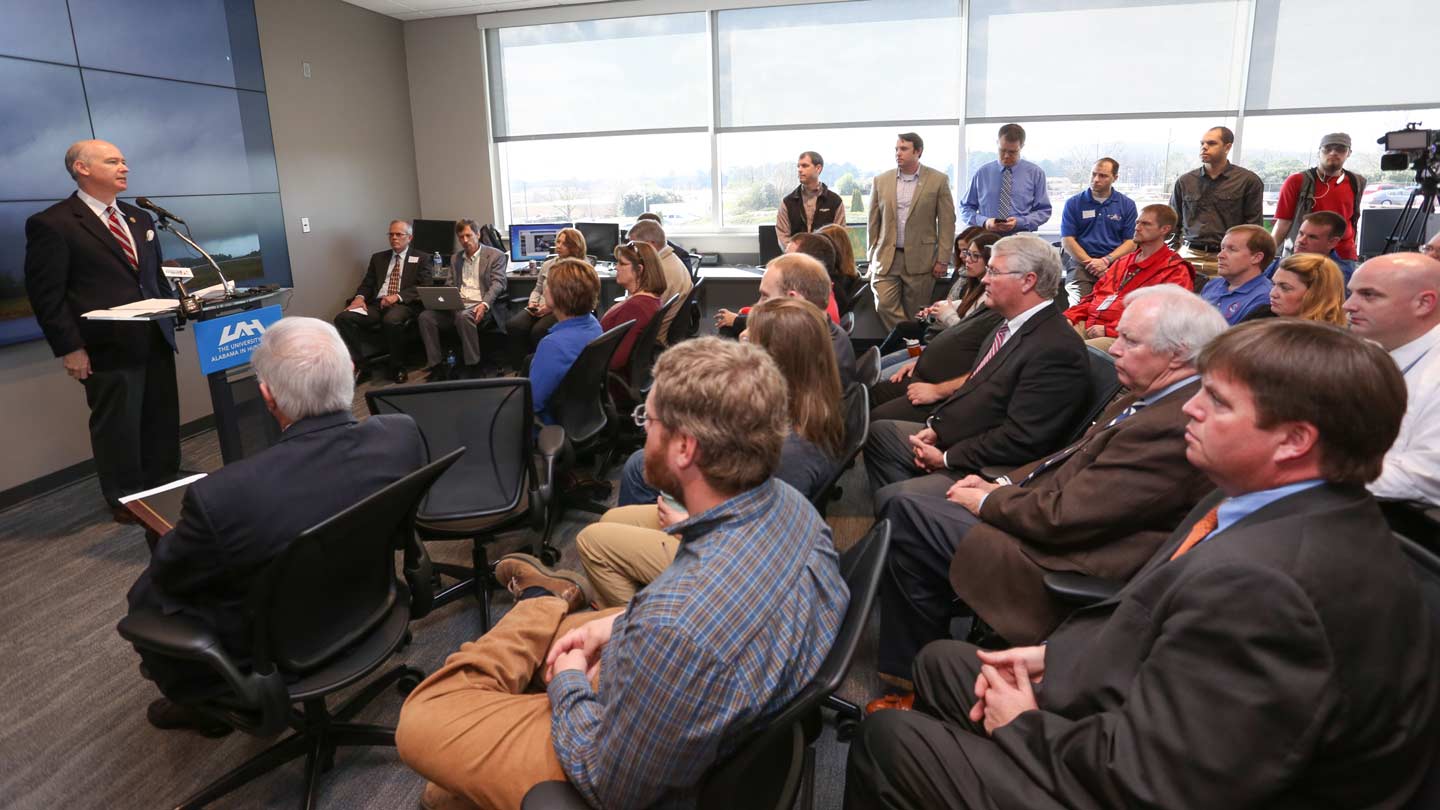 U.S. Rep. Robert Aderholt speaks at the opening of the Verification of the Origins of Rotation in Tornadoes EXperiment-Southeast (VORTEX-SE) in UAH’s SWIRLL facility.

Tornadoes are the target as researchers spend the next two months in northern Alabama collecting data as part of the Verification of the Origins of Rotation in Tornadoes EXperiment-Southeast, a research project coordinated by NOAA's National Severe Storms Laboratory.

The goal is to understand how environmental factors in the southeastern United States affect the formation, intensity, structure, and path of tornadoes, as well as determine the best methods for communicating forecast uncertainty to the public.

The VORTEX-SE field study, set to run March 1 through April 30, will involve 40 physical and social science researchers from 20 research entities, many located in the Southeast. They will deploy approximately 13 vehicles, three mobile radars and one fixed radar from their operations base at the University of Alabama in Huntsville (UAH). During previous VORTEX field campaigns, researchers roamed the Great Plains, taking the instruments to the storms. This time, some of the instruments are stationary, and the domain is much smaller. As a result, the researchers expect to operate during four to five periods of several days each as the storms come to them.

The number of killer tornadoes in the southeastern U.S. is disproportionately large when compared to the overall number of tornadoes throughout the country. Researchers believe this is caused by a series of physical and sociological factors, including tornadoes at night, in rugged terrain, as well as tornadoes occurring before the perceived peak of "tornado season," during a time of year when storms typically move quickly. Other variables include the lack of visibility, inadequate shelter, and larger population density that increases the vulnerability of residents in this area.

"In many ways, VORTEX-SE represents a new approach to tornado research in general," said Erik Rasmussen, VORTEX-SE project manager and research scientist for the University of Oklahoma's Cooperative Institute for Mesoscale Meteorological Studies working at the NOAA National Severe Storms Laboratory. "This is the first field observing campaign in the Southeast U.S. to begin to understand how the atmosphere can become locally favorable for tornadoes and how these changes can be better anticipated in the tornado forecast process."

VORTEX-SE activities are being supported by a special Congressional allocation of more than $5 million to NOAA made in 2015. A similar allocation made this year will support additional activities in the spring of 2017.

Researchers from the following organizations are participating in VORTEX-SE: