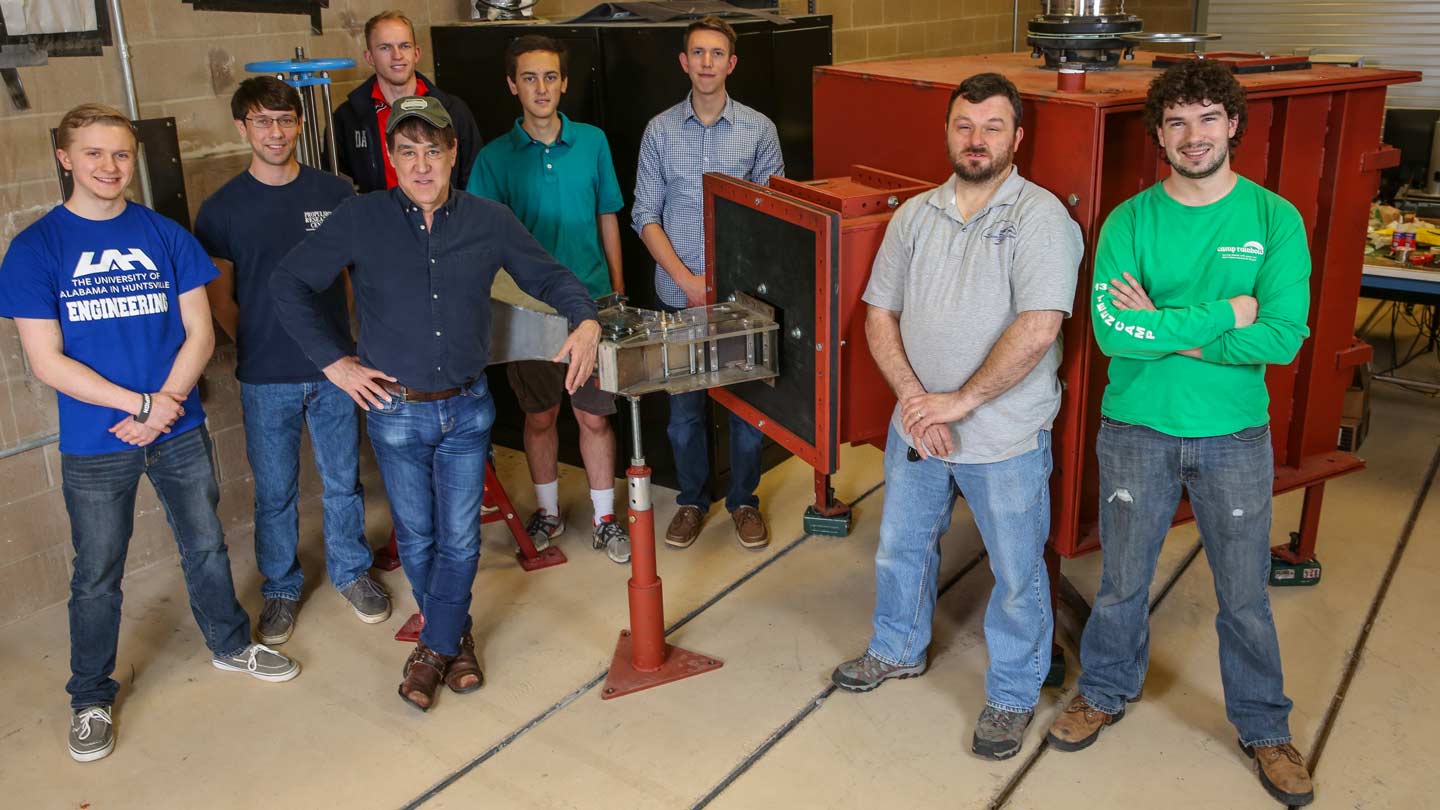 A new $2 million wind tunnel system at The University of Alabama in Huntsville (UAH) is ready to undertake supersonic flow research with Mach numbers up to 3.

Built with support from the Alabama Innovation Fund, the SuperSonic/TranSonic/WindTunnel, or SS/TS/WT, resides in the Air Breathing Test Cell at UAH's Johnson Research Center and makes UAH one of an elite handful of universities nationwide with such capabilities. The facility recently passed testing at supersonic speeds and is being outfitted with an optical flow visualization system for research use.

"The recent successful tests were an order of magnitude more difficult compared to what we did in early May," says Dr. Phillip Ligrani, UAH eminent scholar in propulsion and the project's principal investigator, who is also a professor of mechanical and aerospace engineering. The first confirmed supersonic flow test took place on June 20, 2016. The test section inlet Mach number was 1.57.

"As with previous tests, we were all pleased regarding the smooth and relatively quiet operation of the facility, which we attribute in part to the design of associated wind tunnel components," Dr. Ligrani says. "We are currently refining the main pressure regulating valve operation and setting up systems for high-quality flow visualization."

"We will be pleased to do some demonstration runs with guest observers in the near future, but we want the flow visualization apparatus operational first," Dr. Ligrani says. "This facility enhances the ability of UAH to conduct high quality aerospace, aerodynamic and aero-propulsion research in order to advance the state of the art in these different areas."

The project was awarded $249,810 by the Alabama Innovation Fund, supplemented by investment from UAH's Office of the Vice President for Research and Economic Development. The Innovation Fund is a program administered by the Alabama Department of Commerce that aims to stimulate promising research at universities and organizations across the state.

"The state of Alabama provides an excellent and unique environment for the development of advanced research efforts, which are tied to important and vital economic activities. Such activities benefit the scientific and engineering communities, not only for the Huntsville area, but for the entire state," says Dr. Ligrani. "We are likewise very grateful to the UAH Office of Research and Economic Development for the generous supplemental support we received for this project. I am also grateful to the Propulsion Research Center and the Department of Mechanical and Aerospace Engineering for the outstanding support provided to this and to related efforts since my arrival at UAH in August of 2014."

Air for the tunnel is supplied by four 16-ton, 14-foot-long tanks valued at $1 million that were donated to the university by the U.S. Air Force's Arnold Engineering Development Center in Manchester, Tenn. The tanks started life as rocket fuel storage but now are used in conjunction with a fifth tank to provide 50 cubic meters of compressed air storage at supply pressures up to 2,500 pounds per square inch.

Air from the tanks is routed through pressure regulating valves to two wind tunnels that are slightly larger than washing machines, where it rushes past objects under research in the 9.6-inch by 4-inch test bed chambers and then is exhausted outdoors through a noise reduction baffle system.