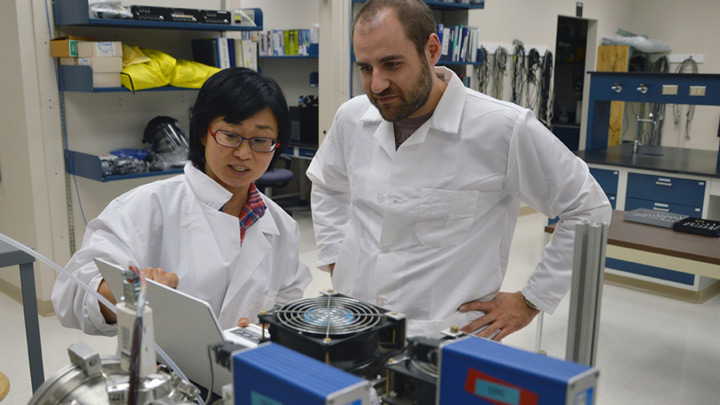 Dr. Shanhu Lee and Lee Tiszenkel, a graduate student in atmospheric science at UAH, test hardware that will be used to study isoprene reaction processes in the atmosphere.

A new laboratory at The University of Alabama in Huntsville (UAH) is setting out to solve some of the fundamental mysteries about one of the common compounds floating in the atmosphere and what effects (if any) that compound has on climate change.

Among its projects, UAH's new Aerosol Chemistry Lab is studying the basic processes by which an isoprene molecule gathers other molecules until it is large enough to start attracting water to form cloud droplets. So little is known about this process that scientists disagree about whether isoprene promotes or suppresses the process that forms clouds.

Isoprene is an organic compound emitted by broadleaf trees and other leafy plants. Current estimates are that plants release about 550 million tons of isoprene into the atmosphere in a normal year.

Of course, some areas have more isoprene than others, said Dr. Shanhu Lee, the associate professor of atmospheric science who supervises the new lab in UAH's Earth System Science Center. Oceans, deserts and grasslands have less. Tropical and temperate forest areas have more. The southeastern U.S. (where trees thrive) is a virtual isoprene "volcano," Lee said.

"When trees are in stress they release isoprene, like humans sweat when it is hot," she said. "When the temperature and relative humidity are high, such as we have in the Alabama summer, they emit isoprene. A lot."

What they learn about isoprene might have global implications, Lee said, because the organic compound used in models to predict how fast new particles form may not be the only organic compound those models should be considering.

At present, models that forecast climate change use research done in a forest in Finland, where evergreens release monoterpenes instead of isoprene. While both are volatile organic compounds (VOCs), monoterpene makes up only 10 percent of the world's VOCs in a year.

Isoprene makes up about half of the world's VOCs. And, unlike monoterpenes, isoprene oxidation reactions can produce smaller and more volatile compounds. These aren't ideal for forming small particles that grow into cloud droplets and, eventually, clouds. Instead, they condense on existing aerosol particles, which can suppress the formation of new smaller particles.

"Climate models apply that (monoterpenes) theory to the global scale," Lee said. "That includes forests in the southeastern U.S. and the Amazon, where isoprene emissions are dominant over monoterpenes."

Using monoterpenes data to fill in the gaps of what isn't known about isoprene means "we basically over predict cooling due to cloud formation."

Using mass spectrometers and other instruments, Lee and her students hope to learn how temperature and relative humidity influence how quickly isoprene "nucleates," or grows by gathering other molecules and particles also floating in the atmosphere. Because isoprene is so reactive, this is a process that can start within seconds after it enters the atmosphere.

They also want to know how much isoprene contributes to the nucleation of sulfuric acid, and from that process the formation of particles or droplets that are the seeds of cloud droplets.

While the instruments are being tested in a lab in the National Space Science & Technology Center in UAH's Cramer Research Hall, and in UAH's Severe Weather Institute, Laser and Lightning Laboratory, they are portable. Lee wants to take them on the road to study isoprene and aerosol chemistry in different environments, such as deep inside a forest canopy or downwind from the forest fire.