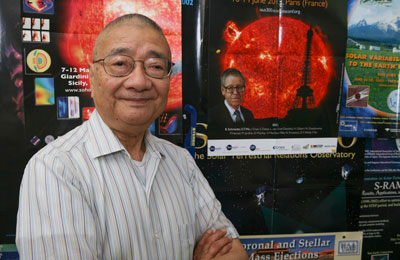 HUNTSVILLE, Ala. (August 5, 2013) - Three new solar modeling developments at The University of Alabama in Huntsville (UAH) are bringing scientists closer to being able to predict the occurrence and timing of coronal mass ejections from the sun.

A solar mass ejection (CME) has been likened to a huge space tornado or a space hurricane blasting off from the sun with such size that it dwarfs the Earth, and a powerful direct hit can deform Earth's magnetic field and fry the circuits of orbiting satellites, spacecraft and delicate terrestrial electronics, turning our technology-dependent planet into a post-Katrina New Orleans-type melee on a massive scale.

In a large-scale storm, cell service would stop, air traffic control would lose its eyes and ears, and everything from traffic light control to the automated heating and cooling of buildings to the critical systems that control nuclear armaments could go haywire. The Earth would go largely dark as power grids blink offline.

As with Earth's weather, the key to preventing tragedy is prediction and preparation.

"We are working on being able to use a mathematical model to predict space weather just like we predict weather fronts here on Earth," said UAH physicist Dr. Shi Wu, a distinguished professor emeritus of the Department of Mechanical and Aerospace Engineering at UAH who has a three-year, $340,000 National Science Foundation grant for the work. "There is a similarity between the Earth's weather and the sun's weather, but on the sun it is the movement of the magnetic field and the plasma that causes the weather, not an atmosphere."

The founder and first director of UAH's Center for Space Plasma and Aeronomic Research (CSPAR), Dr. Wu said he's technically retired, but his intense curiosity and interest in the sun have driven him to devise a model for the development of CMEs that for the first time ever has been tested and proven against CMEs observed in the past.

He has also modeled the conditions that are present in solar magnetic shear, a sigmoidal twisting of the sun's magnetic field, flux emergence, null formation, torus instability, reconnection and free energy that can cause a CME, and he is about to begin testing a model that tracks Earth's position relative to the timing of a CME event.

We are working on being able to use a mathematical model to predict space weather just like we predict weather fronts here on Earth. There is a similarity between the Earth’s weather and the sun’s weather, but on the sun it is the movement of the magnetic field and the plasma that causes the weather, not an atmosphere.

In groundbreaking research, the mathematical model of developing coronal mass ejections created by Dr. Wu and his former students who are now his Chinese colleagues at the National Space Science Center (NSSC) in Beijing has been shown to be accurate by comparison with actual observed phenomena from spacecraft tracking events on the sun's surface.

The researchers successfully performed a data-driven magnetohydrodynamic (MHD) simulation of a realistic CME initiation process, a step that may lead to a predictive model and to understanding the precursors to these solar storms.

Prior models had been compared to an ideal mathematical construct of the solar event to mimic an actual event. While the supporting equations for what Dr. Wu and fellow researchers did are lengthy and complex, the explanation is deceptively simple: "I took the observation and put it on my boundary, and it matches."

Secondly, the scientists found that solar magnetic shear conditions that produced flares in their models contain gaps in the shear that make it "tangled up like spaghetti," Dr. Wu said. "When you see this fragmenting of the shear, the flare occurs." The observed phenomena used to test the model show the CME event did indeed initiate in the area where the model shows these gaps occurring.

In the third area of inquiry, Dr. Wu and his former student, Dr. Chin Chun Wu at NRL, are about to begin testing against observed conditions a mathematical propagation model that tracks Earth's position relative to the timing of the expansion of storms into the solar system - a step that will allow scientists to predict whether Earth will be in the storm's track or not. "Whether it hits us or not depends on where the Earth is in its orbit," said Dr. Wu.

Numerous observed past solar events make it easy for researchers to test their mathematical models against them, Dr. Wu said. "Right now, we have so many spacecraft and observatories that measure and record the events on the surface of the sun." The result is that "when we see something happen on the sun, we have a model to trace that disturbance and we know the physics behind it."

Development and integration of accurate versions of the three mathematical models "will be a powerful thing in predicting space weather," said Dr. Wu, who has served at UAH for over 40 years. "I started studying CMEs back in the 1970s," he said. "I started with Skylab to work on this type of problem."

Now, as he forms a team for the research that will include Prof. Qiang Hu of the UAH physics department and CSPAR, as well as his former students and collaborators, Dr. Feng, Dr. Jiang from China and others he has taught, Dr. Wu senses the possibilities resulting from a lifetime of work.

"By this, we will be able to predict when an event will happen and if the Earth is in position to be hit," he said. "I am an old man but I am happy. Everybody who is involved with this is my colleague or former student!"