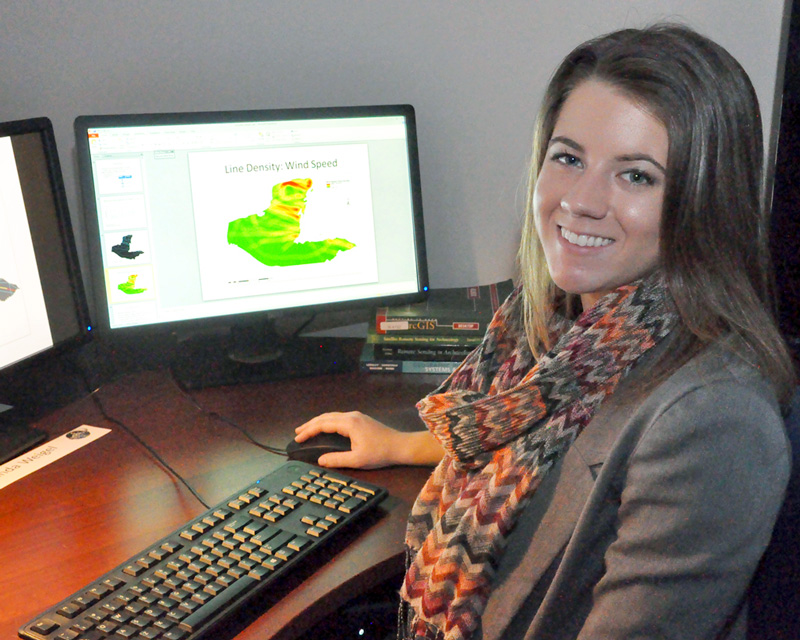 Amanda Weigel, a UAH graduate student in Earth system science, is a meteorologist and former VPI storm chaser who was as a child afraid of thunderstorms. While she is working on an archaeology project through the HD3 lab, she hopes to do her thesis on the effect that terrain and land surfaces have on severe storm and tornado development.
Photo credit: UAH

HUNTSVILLE, Ala. (Jan. 14, 2014) - A new laboratory in The University of Alabama in Huntsville's Earth System Science Center is giving students opportunities to gain research experience in areas as diverse as archaeology from space, and learning which biological samples might try to take over the world if the power to their hermetically sealed freezer goes off for several days.

About a dozen students in Earth system science and atmospheric science are working on research projects this semester through the new Human Dimensions, Discovery and Decision Making (HD3) lab.

Amanda Weigel, for instance, is using satellite data and information about hurricanes from the past 150 years to study archaeological sites in Mexico's Yucatan peninsula to determine which sites might be at greatest risk from storm-related damage.

With funding from the Federal Emergency Management Agency, Whitney Cosby is working with UAH officials to identify which critical functions (such as student housing and that biology freezer) should be the highest priorities for restoration should the university be hit by a natural disaster.

"This is to help students get research skills and prepare them to make a successful transition to graduate school, while also doing worthwhile projects," said Dr. Robert Griffin, an assistant professor of Earth system science and one of the lab's creators.

HD3 was created to give students opportunities to get involved in research projects in areas related to meteorology, the environment and remote sensing. Funding to create the lab came from both the Earth System Science Center and a grant from UAH's vice president for research. 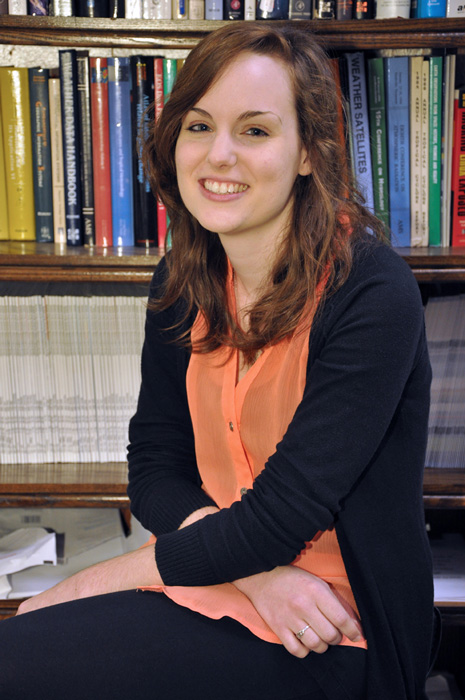 An undergraduate sociology major with a math major, Whitney Cosby is starting the graduate program in Earth system science this semester. She is excited about using her background in statistics in her HD3 project: creating a survey for UAH administrators to help them determine the critical functions that would need priority attention in the wake of a natural disaster.
Photo credit: UAH

"We routinely have students coming to us asking, "How do we get more involved? We would like to do research, but where do we go to do that?'" said Dr. Tom Sever, a research professor in atmospheric science and HD3's other creator.

Many of the projects are created new, while others are ongoing projects. Some use NASA satellite instruments to study such things as flooding, habitat destruction or water pollution in areas where "on the ground" resources might be scarce or nonexistent.

The lab will also work with students who are participating in the university's summer research and education program in Panama, giving them opportunities to begin and complete their research on campus.

There is a designated HD3 lab space in Cramer Hall, with specially equipped computers. The lab also has a mobile lab, with GIS units and laptop computers that can be taken into the field.