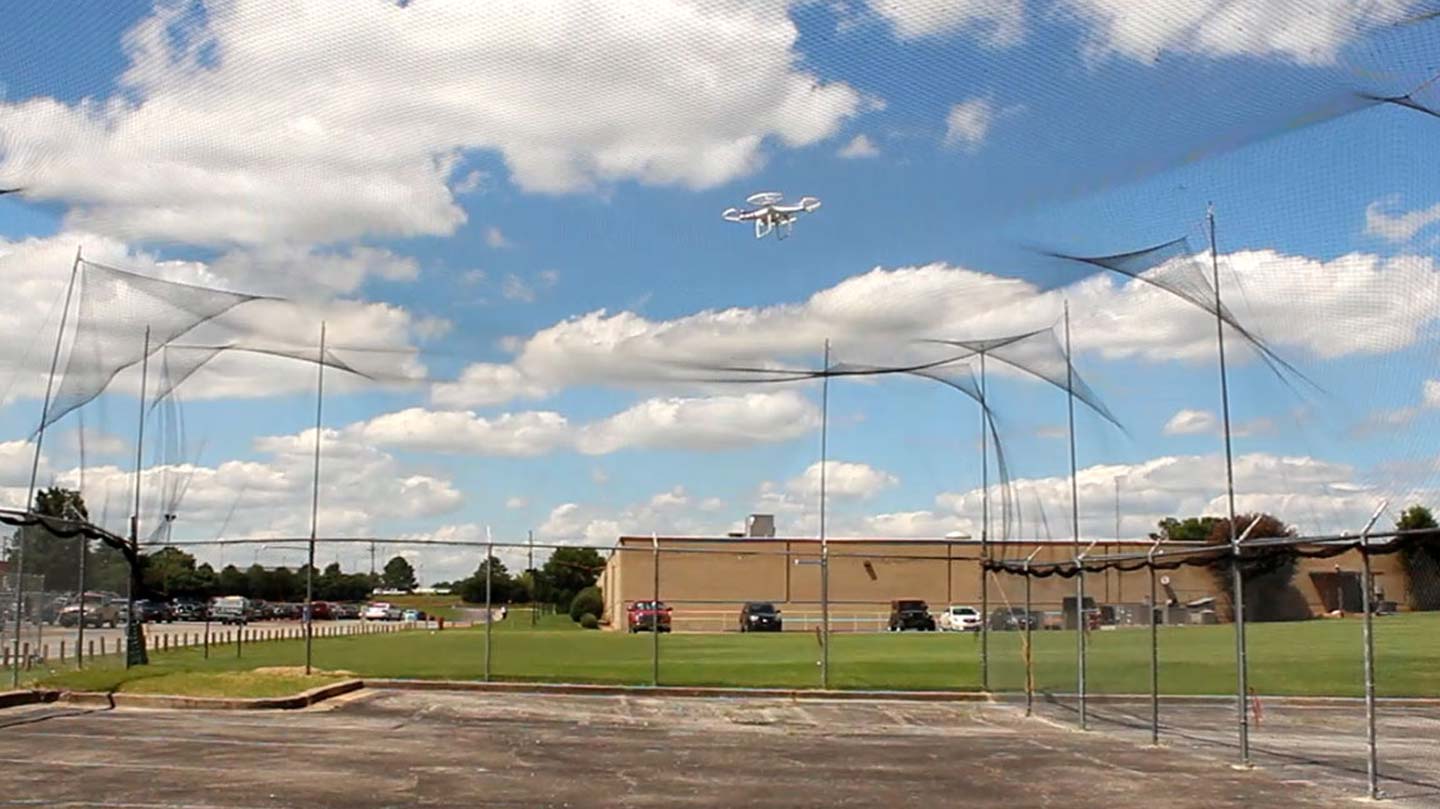 HUNTSVILLE, Ala. (Aug. 6, 2014) - A new enclosure for unmanned aerial vehicle (UAV) testing gives the Systems Management and Production (SMAP) Center at The University of Alabama in Huntsville (UAH) new capabilities to test software and hardware while not violating Federal Aviation Administration (FAA) rules.

With his center recently moved across Sparkman Drive from the main UAH campus, SMAP Director Dr. Gary Maddux recognized opportunity when he saw a chain-link fenced enclosing a portion of the parking lot nearby the building.

Matthew Perr and Frank Nielson helped out by designing an extendable pole and rope system that supports black polyethylene netting to create a 20-foot-high, 100 by 50-foot enclosure. The poles are designed to raise and lower the net on rollers.

"We're looking at this as a test space due to the FAA certificates of authorization that is required to fly UAVs on campus," says Norven Goddard, a SMAP research scientist. "There's no rule against flying UAVs under a net." 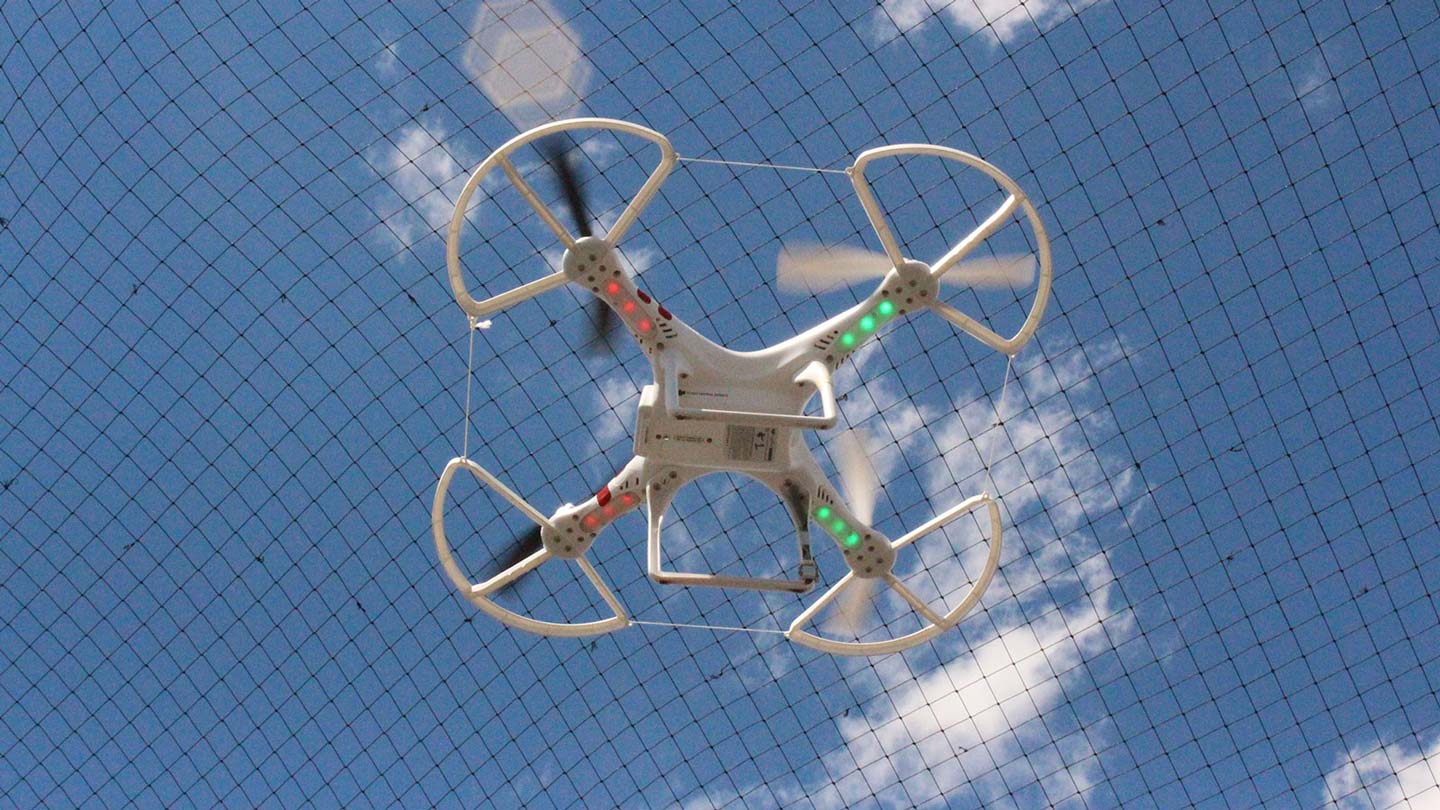 UAH continues to pursue the necessary licenses and permits needed to establish a virtual fence around the campus to fly UAVs. In the meantime, the enclosure can serve several immediate needs.

"In order to calibrate the GPS (Global Positioning System) on these UAVs, they have to be in flight," says Bill Sabados, a SMAP research scientist. The enclosure could also be used to create an obstacle course, Sabados said, as SMAP explores semi-autonomous and autonomous flight.

"A fenced-in area allows us to do battery testing and component testing, as well as testing out some of our own designs," Goddard says. "We can also go deeper into the swarm concept with multiple UAVs in the air at the same time."

SMAP has a two-legged approach to UAV development. One leg involves using off the shelf parts in innovative combinations designed to accomplish specific tasks, like Earth system science flights carrying remote sensors and cameras. Goddard calls this the "tool" approach. 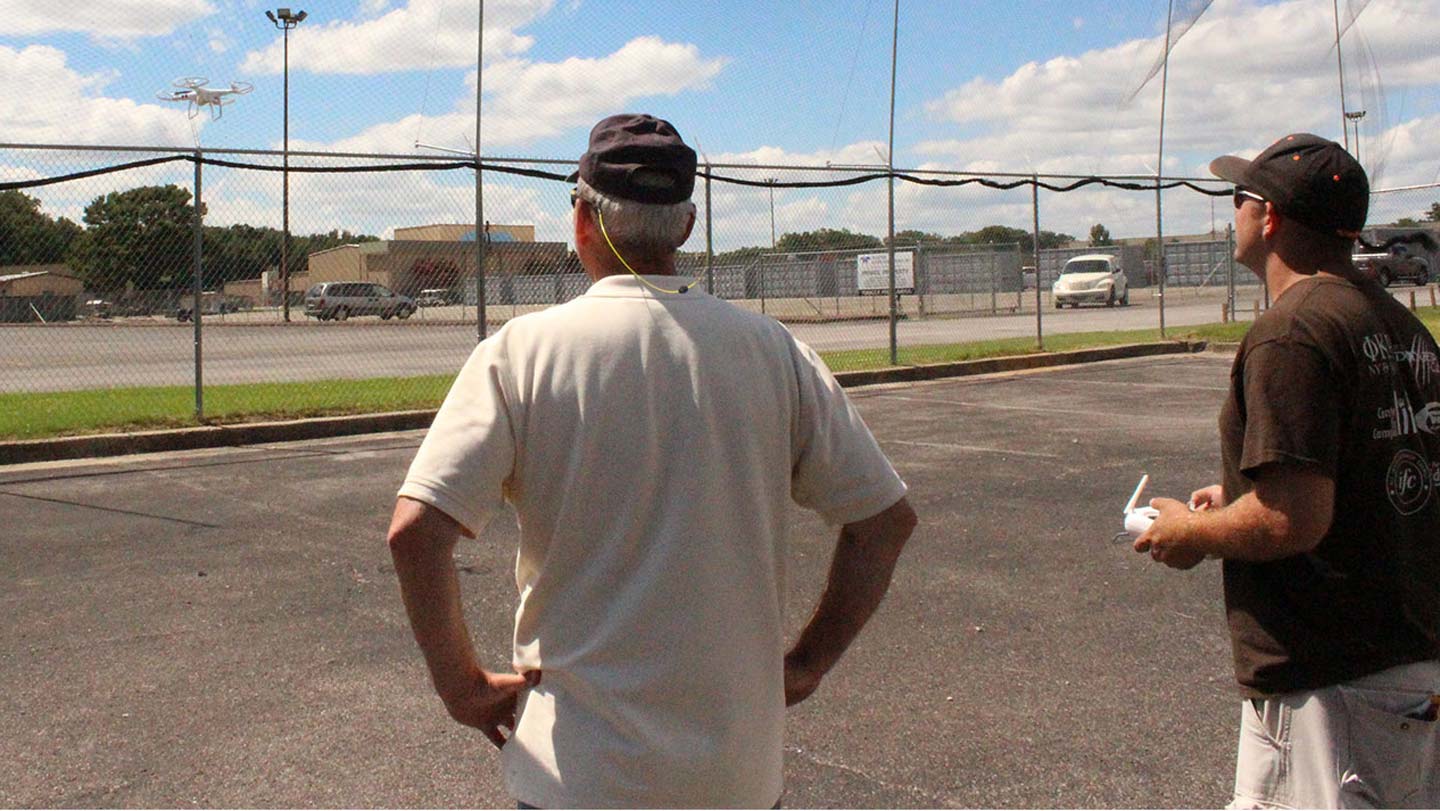 SMAP personnel monitor a UAV in flight in the enclosure.

Novel approaches can integrate UAVs with robots, either remotely controlled or autonomously. Small UAVs could swarm from a single positioning robot that delivers them to a destination to accomplish a task like search and rescue. Likewise, small and cheaply made UAVs could be easy for rescuers to carry along and deploy. Small size and inexpensive production could open the possibility of expendable use, a concept that aids range because battery life is not needed for a return trip.

"We're looking into low flight, possibly in a swarm, to be useful in situations like law enforcement, where you might need a UAV to approach and look into a car, for example. We're very interested in robotic ground and air system interfaces," says Goddard. "So our whole idea behind this enclosure was, what can we do that will allow us to continue our research now?"