Marsbee mission gets a little more real thanks to systems engineering 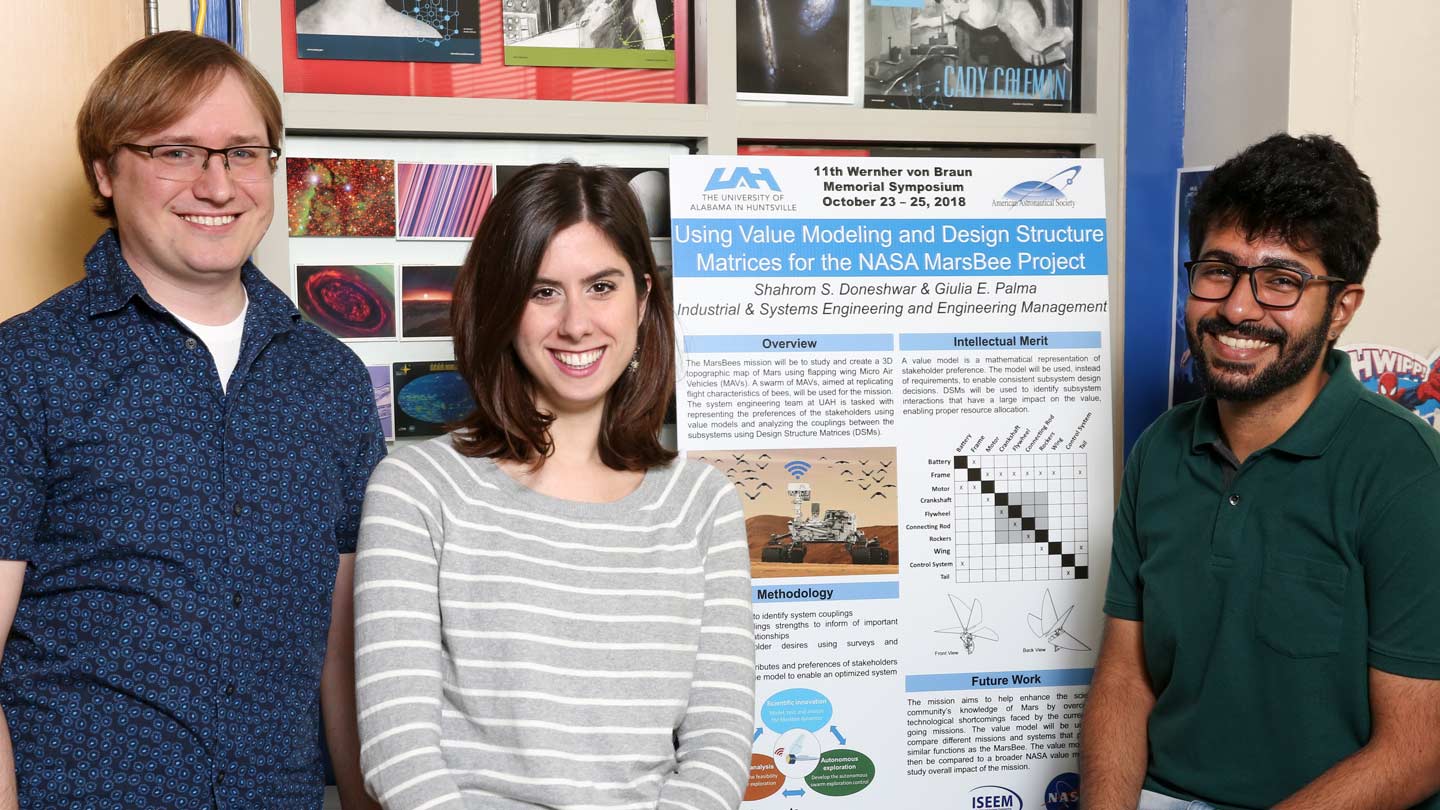 Assistant professor Dr. Bryan Mesmer (left), one of the original collaborators on the Marsbee proposal, enlisted the help of ISEEM graduate students Giulia Palma (center) and Shahrom Doneshwar (right) to develop and use value modeling and design structure matrices for the project.

When Shahrom Doneshwar first learned about the NASA-funded plan to explore the surface of Mars using robotic bees, he says he "didn’t even know that it was possible!" Now, however, the master’s candidate in the Department of Industrial & Systems Engineering and Engineering Management (ISEEM) at The University of Alabama in Huntsville (UAH) is an award-winning member of the Marsbee team.

Doneshwar’s presentation of his research, entitled "Systems Approach for the NASA Marsbee Mission," was named one of the most outstanding at the RAM XI Training Summit, hosted by the Huntsville chapter of the Society of Reliability Engineers; fellow ISEEM students, Christopher White and Victor Lopez, also won awards for their presentations, entitled "Exergy-Efficiency Optimization of a Rocket Launch Vehicle" and "Using SysML Models as a Complexity Assessment Tool," respectively.

The one-on-one interactions with the professors here was a good match.

Doneshwar applied to UAH after earning his undergraduate degree in mechanical engineering from the M.H. Saboo Siddik College of Engineering in India. "I had two or three classes related to systems engineering, and I really liked them, so when I looked into graduate schools that provided systems engineering degrees, I was interested in the research being done by Dr. Sampson Gholston," he says. "I’m also the kind of person who will get lost in a crowd, so the one-on-one interactions with the professors here was a good match."

It was through Dr. Gholston that Doneshwar was introduced to Dr. Bryan Mesmer, an assistant professor in systems engineering and one of the original collaborators on the Marsbee proposal. "I was waiting for an opportunity to explore the systems engineering perspective, and since I’m also a mechanical engineer, I knew what he was talking about when he told me what they were working on– it just clicked," he says. "So I did it for a month unofficially, and then he hired me as a graduate research assistant to deal with the Marsbees’ subsystem interactions."

Doneshwar (center), along with fellow ISEEM students Christopher White (left) and Victor Lopez (right), received an award for his research at the 2018 RAM XI Training Summit.

"The design structure matrices will be used to identify subsystem interactions that have a large impact on the value, thereby enabling proper resource allocation," he explains. "And the value model is a mathematical representation of stakeholder preferences, instead of requirements, to enable consistent subsystem design decisions." With the project only in Phase I of NASA’s Innovative Advanced Concepts program, however, Doneshwar clarifies that their work is in the preliminary stages. "We are not applying global sensitivity equations," he says, "we are visualizing the interactions."

In addition to presenting his research on using a systems approach for the mission at the RAM X event, Doneshwar and Palma also presented their poster, "Using Value Modeling and Design Structure Matrices for the NASA Marsbee Project," at the American Astronautical Society’s 11th annual Wernher von Braun Memorial Symposium held in late October on the UAH campus. And going forward, Doneshwar is hoping to co-write a paper about the systems perspective of the Marsbee project with Dr. Mesmer. "I haven’t seen many papers on using a design structure matrix approach with value modeling for an unmanned aerial vehicle before," he says.

And should the Marsbee project receive funding for Phase II, Doneshwar’s systems engineering expertise will be of even more value. "We can use the value model to compare different missions and systems that perform similar functions as the Marsbee," he says, "and then compare that to a broader NASA value model to study overall impact of the mission." After that, who knows? Maybe one day, the Marsbees he didn’t even know were possible will be making their maiden flight on the Red Planet.