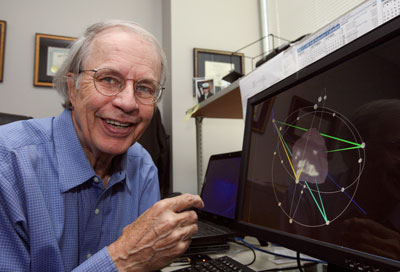 Dr. Richard Fork, an electrical and computer engineering professor at UAH who is the principal investigator for the Laser Science and Engineering Laboratory, explains the asteroid deflection system.
Michael Mercier | UAH

HUNTSVILLE, Ala. (Sept. 26, 2013) - A space-based laser system proposed to NASA by University of Alabama in Huntsville (UAH) researchers could be a cost-effective way to nudge small asteroids away from a collision course with Earth.

With the February meteor explosion in Russia heightening U.S. government interest in how asteroid collisions with Earth can be prevented, the UAH scientists say using their system against smaller asteroids will provide practical scientific data needed to scale it up to defend against very large asteroids.

The bus-sized meteor that exploded at Chelyabinsk, Russia, is a small object in comparison to others in space. It still left a plume of dust with hundreds of tons of material in it in Earth's atmosphere for three months.

The system the UAH scientists propose could move a meteor of that size away, said Dr. Richard Fork, an electrical and computer engineering professor at UAH who is the principal investigator for the Laser Science and Engineering Laboratory. A recent paper on their method is "Mode-locked Lasers Applied to Deflecting a Near Earth Object on Collision Course with Earth"; Richard Fork, Spencer Cole, Luke Burgess, Grant Bergstue; arXiv:1309.3238 (physics.space-ph).

Our concept is to go out after the little guys and then as we learn more, we can take on the big guys," said Dr. Fork. "As far as we're concerned, we have identified a technically calculable and optimally efficient means of deflecting small asteroids of the Chelyabinsk class. This method can be explored, quantitatively tested and verified in the very near future and then scaled to address larger asteroids and, possibly, eventually even comets."

As far as we’re concerned, we have identified a technically calculable and optimally efficient means of deflecting small asteroids of the Chelyabinsk class.

The UAH system could be delivered to space to meet a detected threatening object on relatively short notice using a system requiring one "mother" spacecraft relatively near the asteroid and a configuration of multiple microspacecraft more closely orbiting the asteroid. "The amount of average power to be delivered to the asteroid as coherent laser light can be comparable to the power, 10 kilowatts, supplied by the solar system to the currently existing Dawn spacecraft," Dr. Fork said. "We see one of the most demanding technical tasks as developing the optimally efficient mode-locked laser and optical system required to apply the deflecting force."

A computer based system managing the deflection process includes a capability to locate small areas on the asteroid that are locally flat, optimally located and which also have surface normals oriented for efficient generation of the net deflecting thrust. The ultra-short pulses from the lasers will superheat the asteroid in the illuminated spots. That causes discharge of plumes of ejecta that will push the asteroid in a direction opposite to that of the ejected material.

"We propose to focus multiple pulses simultaneously on at least three specifically chosen small areas for each impulsive event, each of about 1 millimeter diameter," Dr. Fork said. "We propose to use a carefully balanced thrust delivered so as to push the asteroid in an optimally efficient manner. We can both choose where the asteroid will go and also verify, after an adequate number of such events have occurred, that the desired deflection is being successfully achieved. The pulses each have a very brief duration, but we achieve the required net deflection by transmitting many such sets of pulses per unit time and then using our observations to continuously improve the deflection process."

The black cloud of ejecta created by the laser impulses becomes clear within roughly 3 microseconds, allowing for the next short burst. 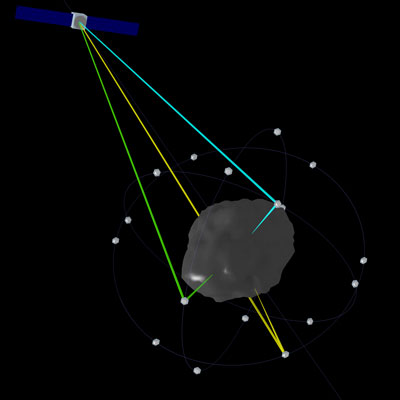 In the UAH system, a laser-equipped spacecraft orbiting within a few kilometers of the asteroid would send trains of ultrashort optical pulses to the reflecting optical systems on the micro-spacecraft directly orbiting the asteroid.

Components for such a system are already in use or can be engineered within a reasonable time period. "Much of the required technology is existing stuff that is out there now. It's not too expensive," Dr. Fork said, adding that the concept is an evolution of work he has been involved in since he was at Bell Laboratories in the 1980s. "It's doable in a few years if the effort is well-funded."

UAH graduate student Luke Burgess has developed an algorithm needed for optimally positioning the microspacecraft that orbit the asteroid and deliver the deflecting impulses.

"As a research university, we are going about it in great detail," said Dr. Fork, noting that his team includes both physicists and engineers and that he also is probing the problem with about 50 students in a laser systems class and also in a special topics class called Cooperative Quantum Energy. "We waited to announce this in the media until we had a reasonably well-developed technical story to tell. We believe that if you do the engineering right, this can be accomplished relatively simply and at reasonable cost."

The power needed to shift the path of a small asteroid appears achievable from an engineering standpoint in the relatively near future, Dr. Fork said.

"One pulse, during the brief time the propulsive force is applied, provides as much power as all three Space Shuttle main engines when they are firing together," he said. "The challenging technical task our group is addressing is that of delivering the required total number of these pulses to an Earth-threatening asteroid so as to apply this highly effective propulsive force efficiently with each delivered pulse.

"The good news is that we have identified a physical process which both enables deflection of smaller threatening asteroids and also offers a means of scaling the technique to larger near-Earth objects." Said Dr. Fork. "The sobering news is that achieving both this high efficiency and the required high rate of delivery will demand extraordinary creative efforts on the part of our emerging generation of engineers and scientists."

An extraterrestrial object striking Earth ranks high on the list of potential catastrophes that could lead to extinction of the human race. "If we fail as a civilization or we go extinct, I think this is the most probable way it will happen," Dr. Fork said.

But an object doesn't have to be cataclysmic in size to do great harm, he added. Even the comparatively small Russian meteor could have caused many deaths and much destruction if it had landed in a more populated area or struck the same city at a more direct angle, making the case for an active defense system.

"This is a great direction for our space program to take," Dr. Fork said, adding that he sees the threat posed by near-Earth objects on collision course with Earth as a global problem that demands a global solution.

"This has to involve international cooperation," he said. "This is about how people can cooperate in space to do some really good science that will benefit the entire planet in a very significant way."