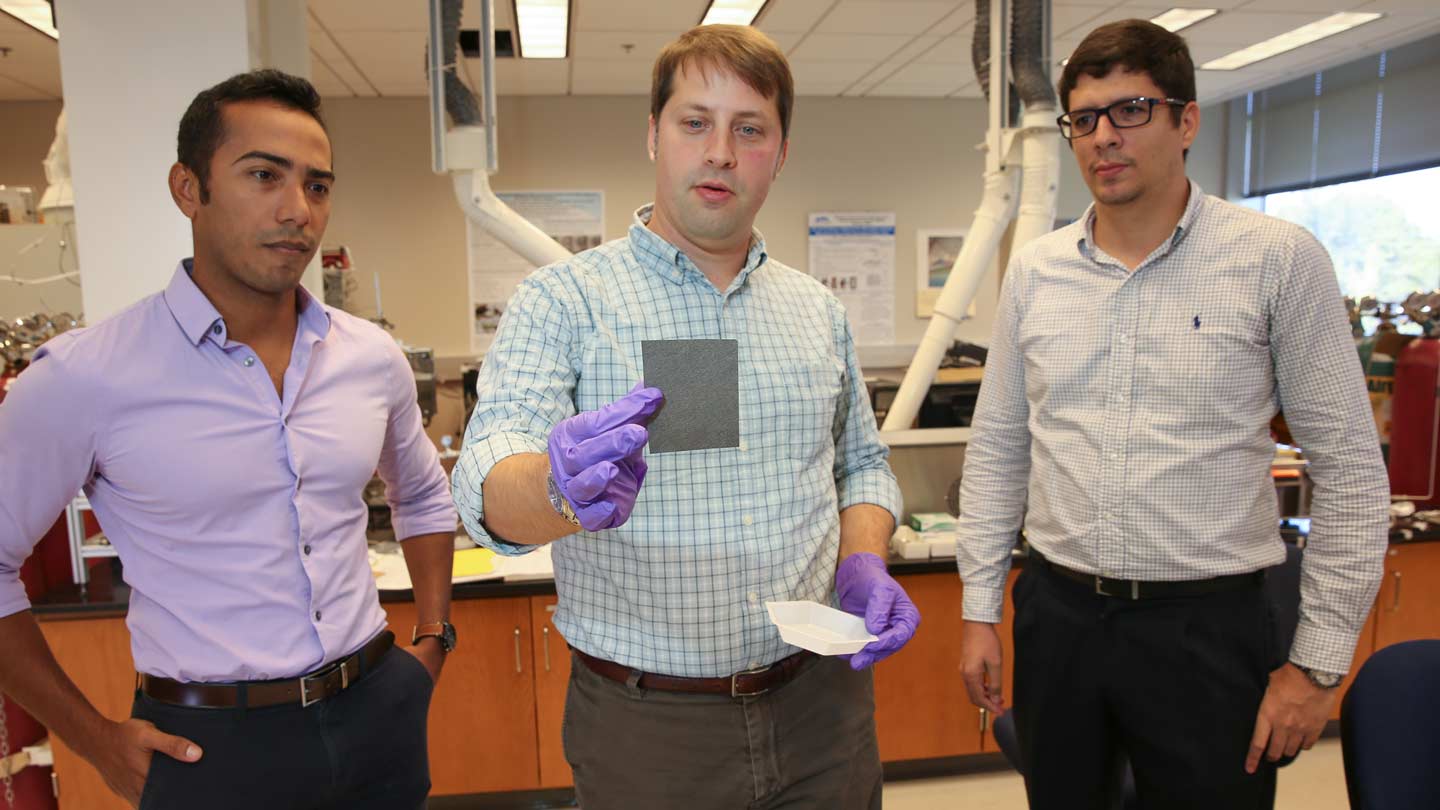 Mechanical engineering Ph.D. students Hernando Gonzalez (left) and Victor Fontalvo (right) are working with Dr. George Nelson on understanding how the multiscale geometry of energy storage and conversion devices affects their performance and reliability. Both are studying at UAH thanks to an informal partnership with the Universidad del Norte in Barranquilla, Colombia.

When Victor Fontalvo left Colombia as a Ph.D. visitor to The University of Alabama in Huntsville (UAH) on a Fulbright scholarship, he was surprised to find a familiar face upon his arrival – that of his former undergraduate student from the Universidad del Norte in Barranquilla, Colombia, Hernando Gonzalez, who is pursuing his Ph.D. in mechanical engineering at UAH. But far from being a coincidence, the pair’s presence on campus was in fact the fruition of a multiyear effort to establish a mutually beneficial relationship between the two universities.

Spearheaded by Dr. George Nelson, an associate professor in UAH’s Department of Mechanical and Aerospace Engineering and the principal investigator of UAH’s Multiscale Transport and Energy Conversion research group, the collaboration is "really about the exchange of ideas and different perspectives," he says. "Victor and Hernando are top notch! There is an approach in doing scientific studies and designing experiments, and they are very well trained in that philosophy. I have been impressed by their work ethic and capabilities."

Given Dr. Nelson’s research focus on the performance and reliability of energy storage and conversion devices, both Gonzalez and Fontalvo are working on projects that involve fuel cells and Lithium ion batteries. "What I would like to do is develop ways to make batteries and fuel cells and other devices more closed-loop in their production and design, so that we could actually have more efficient recycling and re-use of the materials," says Dr. Nelson, whose research is funded by NASA and the National Science Foundation among others. "So Victor is trying to characterize fuel cell materials and how reactants flow through them, and Hernando is working on battery degradation and characterization." 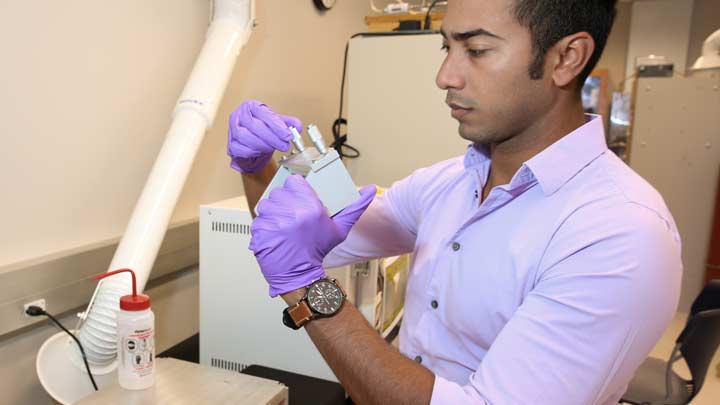 Gonzalez is working on battery degradation and characterization as part of Dr. Nelson’s Multiscale Transport and Energy Conversion research group.

Despite the overlap in their studies, however, each followed their own unique path to UAH. Gonzalez, who earned bachelor’s degrees in mechanical engineering from the University of South Florida and Universidad del Norte through a dual degree program, spent several years working as a production manager at a multinational company in Colombia before realizing he was headed in the wrong direction. "What I was doing wasn’t my professional calling – my career was moving more toward production art and I wanted to be on the research side," he says. "I wanted to work more in energy storage and alternative energy, because it’s changing the world. So I took the GRE and applied to UAH." Once he graduates, he’s hoping to stay on in the U.S. as a postdoctoral fellow doing battery research.

Fontalvo, meanwhile, credits his Universidad del Norte advisors – Dr. Humberto Gómez and Dr. Marco Sanjuan – with encouraging him to pursue his interest in clean, renewable energy beyond his undergraduate degree. "They work on fuel cells, and I found it interesting," he says. "So after I finished my master’s degree, I had the opportunity to apply for a grant from the government to start my Ph.D." Shortly after, his advisors introduced him to Dr. Nelson at the American Society of Mechanical Engineers’ International Mechanical Engineering Congress & Exposition, setting in motion his application for the Fulbright scholarship and, ultimately, his stint at UAH. "I’ll leave in December, and then I will look for full-time work at a university," he says. "I have 10 years of experience as a teaching assistant and lecturer, and I really like the idea of being a professor, so I’m pretty sure I will continue with that."

Both say they will miss UAH when they leave, and not just because of the city’s well-known Southern hospitality. "UAH is amazing – there is a really strong research orientation and the interdisciplinary aspect really adds up to a great experience," says Gonzalez. "And we have so much access to materials and technology that we don’t have in our country, including national labs. It gives you the chance to do deeper research." Fontalvo also points to the university’s "state-of-the-art equipment" and opportunities to collaborate as a draw. "In Colombia, I didn’t have the opportunity to talk with other students working on the same project," he says. "But here there are many people working together and collaborating. It’s an awesome experience."

As for Dr. Nelson, he says he’s appreciated learning about Colombian culture from the pair, and was especially pleased to "have a World Cup team to root for" after the U.S. failed to make the tournament. And while he will of course be sad to see the first two students from Universidad del Norte move on from UAH, he is hopeful that more will follow in their footsteps. "We’re very much at the start of a collaborative relationship," he says.