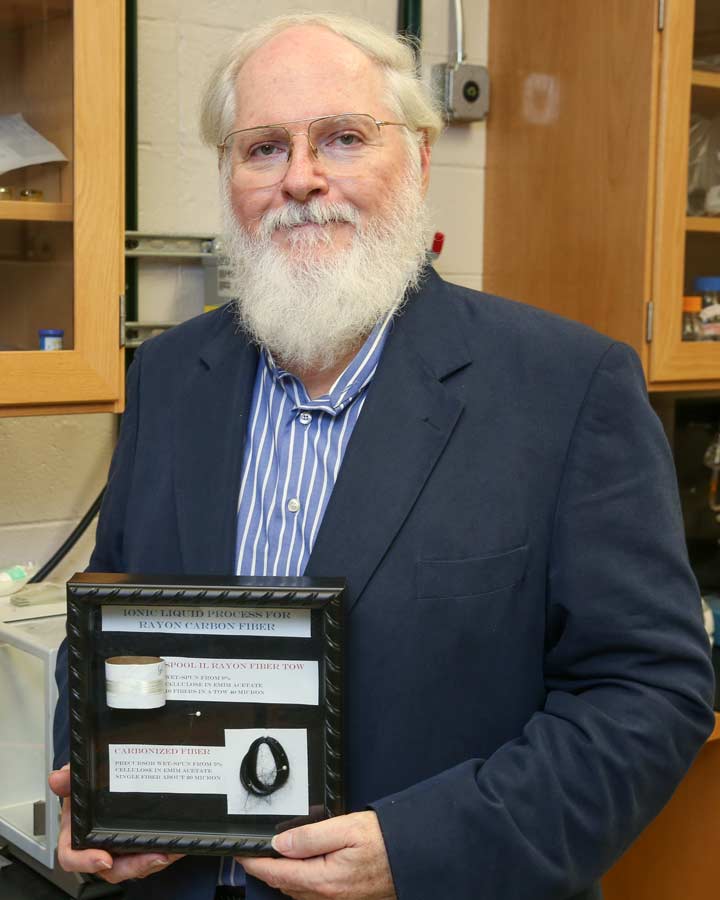 Dr. William Kaukler with a display of the results of his work in his lab at the Reliability and Failure Analysis Laboratory in UAH’s Von Braun Research Hall.
(Click photo for closer view)
Michael Mercier | UAH

A new, green process developed by a University of Alabama in Huntsville (UAH) professor for producing the carbon fiber that forms ablative rocket nozzles and heat shields has been awarded a patent.

The new process could be of interest to NASA, which has a dwindling stockpile of cellulose rayon fiber that dates back to the late 1990s. That’s when manufacturing ceased because the old process used acids and caustics that generated hazardous materials as byproducts.

"This is a green process, so it is environmentally clean," says Dr. William Kaukler, an associate research professor at UAH’s Rotorcraft Systems Engineering and Simulation Center and a NASA contractor for 35 years. "We recycle all the byproducts."

NARC ceased rayon production in the U.S. after it was unable financially to comply with Environmental Protection Agency regulations for the hazardous wastes created.

To form a solid fuel rocket nozzle, layers of carbon fiber fabric made from carbonized rayon are coated with pitch and wound around a mandrel, and then heat-treated to convert the pitch to solid carbon. The resulting nozzle will be a carbon fiber reinforced-carbon composite. A single large solid rocket motor like that used for shuttle boosters can use up to 35 tons of fiber. The rocket nozzles of Army missiles are made from phenolic resin and this same carbon fiber. 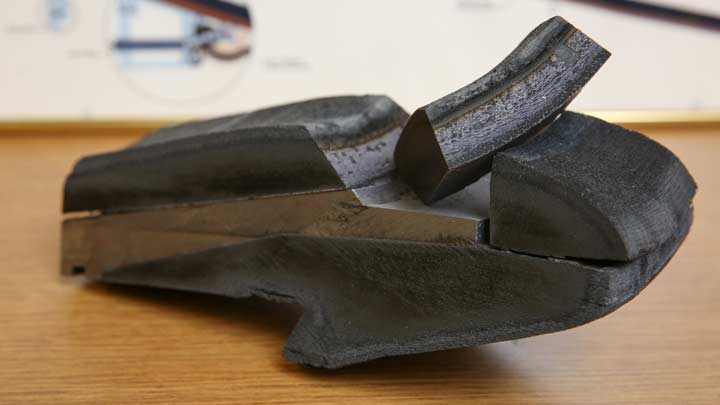 "This carbon fiber is not the same fiber that you’d go out and make aircraft or car parts from," says Dr. Kaukler. "This is the only way to make the carbon fiber that is suitable for rocket nozzles, is to start with cellulosic fiber." The more common carbon fiber used in structural applications is made from polyacrylonitrile (PAN) and, while stronger, its thermal conductivity is too high.

Heat created from the rocket’s burning fuel slowly burns away the interior of the nozzle in flight.

"That’s why you have to make the fiber out of cellulose, because it has the lowest rate of thermal conductivity of any fiber," Dr. Kaukler says. The low conductivity keeps the propellant’s heat in for more propulsion efficiency and it prevents the nozzle from burning away too quickly in flight, with disastrous consequences.

Scaling up the process to manufacturing dimensions could aid NASA as it moves forward with solid rocket motors in its next-generation Space Launch System, and it could prove useful for heat shields used in re-entry to Earth’s atmosphere or on planetary probes designed for landing, Dr. Kaukler says.

"It would be useful for any aero-entry onto a planet."