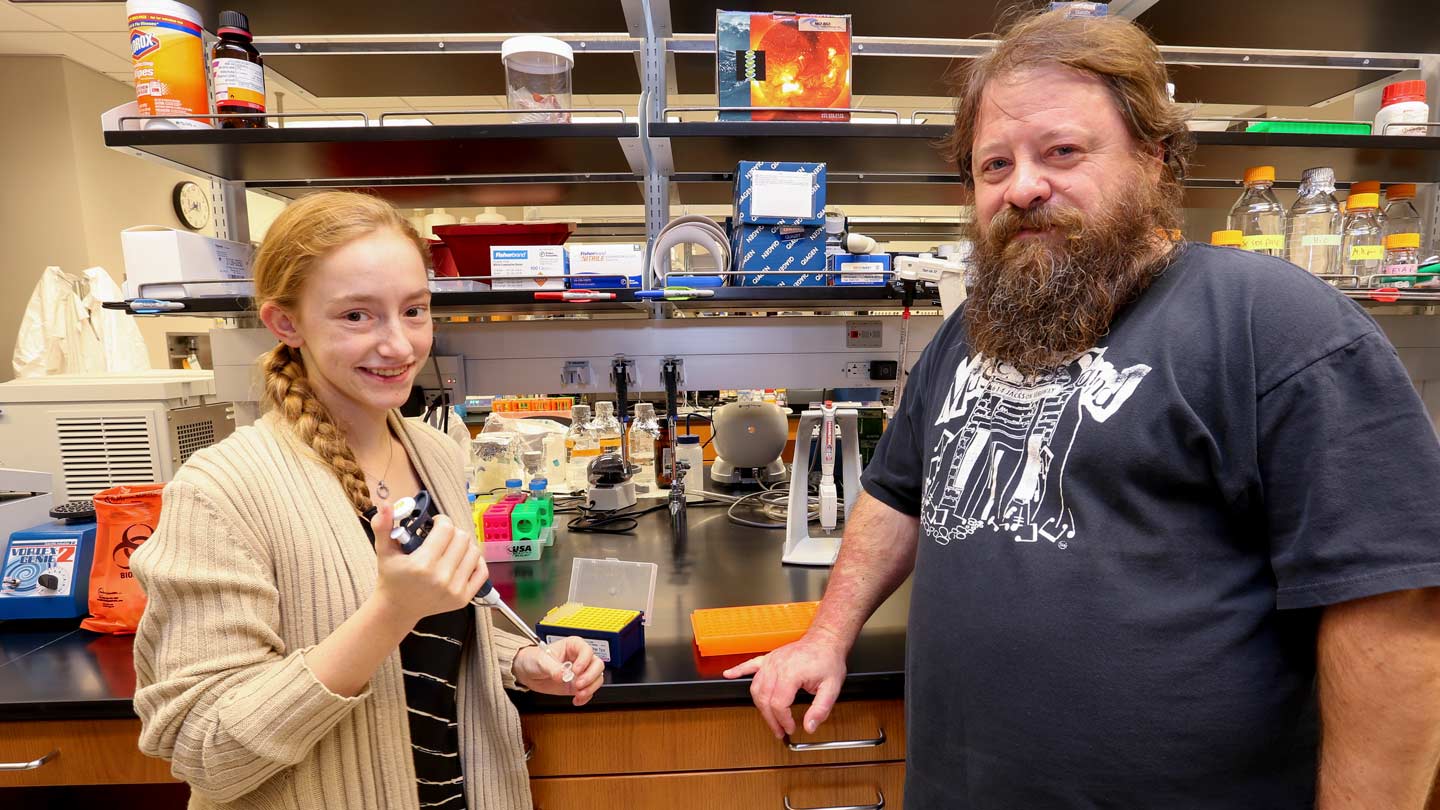 Future Charger Cassie Barnby assisted UAH biology professor Dr. Gordon MacGregor with research on tyrosinemia type I, which she then presented at the 2015 International Tyrosinemia Conference.

For the last seven years, Cassie Barnby has come to The University of Alabama in Huntsville (UAH) to give a presentation on tyrosinemia to students in the College of Nursing. And this past fall, she conducted and presented groundbreaking research with UAH biology professor Dr. Gordon MacGregor at the first-ever International Tyrosinemia Conference in Quebec.

Yet Barnby is neither a healthcare professional nor an academic researcher. Rather, she is a 17-year-old high school senior living with tyrosinemia type I. "My brother and I both have the disorder, and we both received liver transplants as a result," she says. "My childhood was spent in a hospital."

An inherited metabolic disorder, tyrosinemia type I only affects 1 in 120,000 people worldwide. Untreated, however, it can prove fatal by the age of 10. That's because babies born with the disorder lack the enzyme required to break down tyrosine, an amino acid. As it begins to accumulate, tyrosine can damage tissues and organs, resulting in liver or kidney failure, liver cancer, or neurological crisis. Fortunately, outcomes began improving after 2002, when the FDA approved the drug NTBC to treat tyrosinemia; now more and more children with the disorder are living longer than ever before.

What I hope people took away was a curiosity about this pediatric disorder and an awareness of how they can help children with tyrosinemia. If people care, it will help children in the future who will be diagnosed with this disorder.

It was Cassie's mother, Dr. Elizabeth Barnby, who originally brought tyrosinemia to Dr. MacGregor's attention. At the time, she was a student in his graduate physiology class; she's since become a clinical assistant professor in UAH's College of Nursing. "She kept asking me to do this research," he says, laughing. "To be honest, she was a bit of a pain about it!" But it ended up being a perfect fit with the gastrointestinal and kidney research he was already doing, and even more appealing, it was a niche area. "Tyrosinemia is low down on the interest scale - it's unknown, so everything I do is novel."

He soon learned from the existing research that kids whose tyrosinemia is treated with NTBC tend to have a higher percentage of cognitive and behavioral problems, something that hadn't been apparent before the drug had extended the lifespan of those with the disorder. The question was, why? "We're only just seeing the long-term consequences of living with tyrosinemia," says Dr. MacGregor, "but we don't know whether those issues are being caused by the disorder or the treatment."

To find out, he devised two simple tests that would investigate the effects of NTBC and tyrosinemia type I on mouse social interactions and behavior. He also enlisted the help of Cassie Barnby, whom he not only knew from past interactions with her mother but who was already planning to attend the 2015 International Tyrosinemia Conference. "I'll always present research if I'm going to a meeting," he says. "So when Cassie mentioned she was going, I said, well if you are going to the meeting, then you are doing some research you can present!"

Barnby was tasked with helping to run the social preference test, wherein a Y-maze was used to determine whether the test mouse preferred to spend time with a real mouse or a stuffed toy mouse. She and UAH Honors student Ashton Koenig also assisted Dr. MacGregor with collecting and analyzing the data from both the mouse maze trial and the in-cage social interaction test that was included in the experiment.

What they learned was that the mice with tyrosinemia type I showed disorder-specific behavioral differences in social interaction tests independent of any effects of NTBC. They spent threefold more time investigating a stranger mouse and did not discriminate between a real mouse and a stuffed toy mouse. In other words, says Dr. MacGregor, "the mice on the drug behaved like normal mice, but the mice with the disorder had altered behavior." 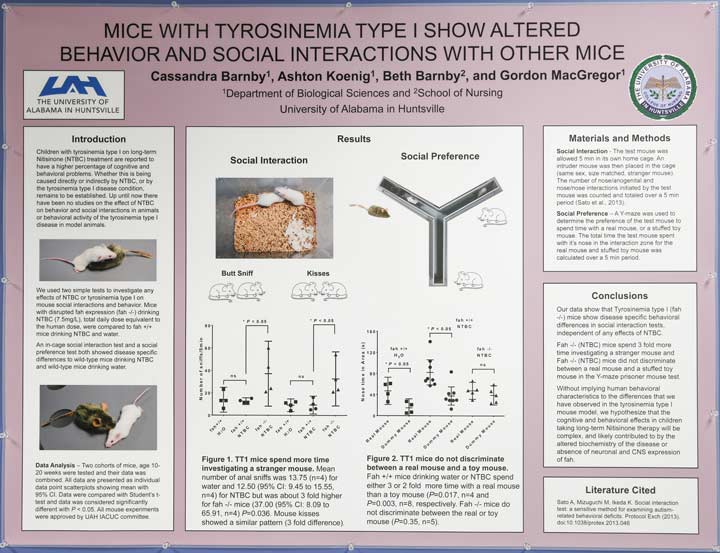 Barnby’s poster presentation was awarded first place in the basic science research category at the conference.

With the experiment complete, Dr. MacGregor and Barnby headed to Quebec to present their research before the more than 200 doctors, scientists, patients, and families at the International Tyrosinemia Conference. "I was terrified I'd mess up," says Barnby. "This was my first time presenting something that important." At the same time, she knew that the conference offered her an incredible opportunity. "I am just a high school student - it's not every day someone my age gets to do something this big."

Ultimately, the hours she put into practicing her presentation paid off. "She did an excellent job," says Dr. MacGregor. And the judges agreed: Barnby was awarded first place in the basic science research category. "When I was called up on stage to accept our award, the moderator was speaking French, so I had a majorly confused look on my face," she says with a laugh. "It wasn't until I looked out to my mom and Dr. MacGregor that I realized I had won. That we had won."

Indeed, she is quick to credit both her mother and Dr. MacGregor for supporting her successful first foray into academic research. "My mom helped me understand some of the language in the research and she boosted my morale when she spoke with me about the project, saying that I could do it," she says. "And I learned a lot from Dr. MacGregor, who encouraged me throughout the project. He was a lot like my mother, just guiding me and helping build my confidence."

But she also knows that her triumph is more than just a personal one, that by doing and presenting research on tyrosinemia type I she is advancing the understanding of a disorder about which relatively little is known. "What I hope people took away was a curiosity about this pediatric disorder and an awareness of how they can help children with tyrosinemia," she says. "If people care, it will help children in the future who will be diagnosed with this disorder."

That's why Barnby plans to continue her research next fall, as a full-time freshman in UAH's College of Nursing - a place she refers to as her "second home" after so many years spent speaking to nursing students about tyrosinemia. "I'm curious to know more and to see if we can't find an improved treatment or cure tyrosinemia altogether," she says. "It would be great if other children didn't need a liver transplant like my brother and me."