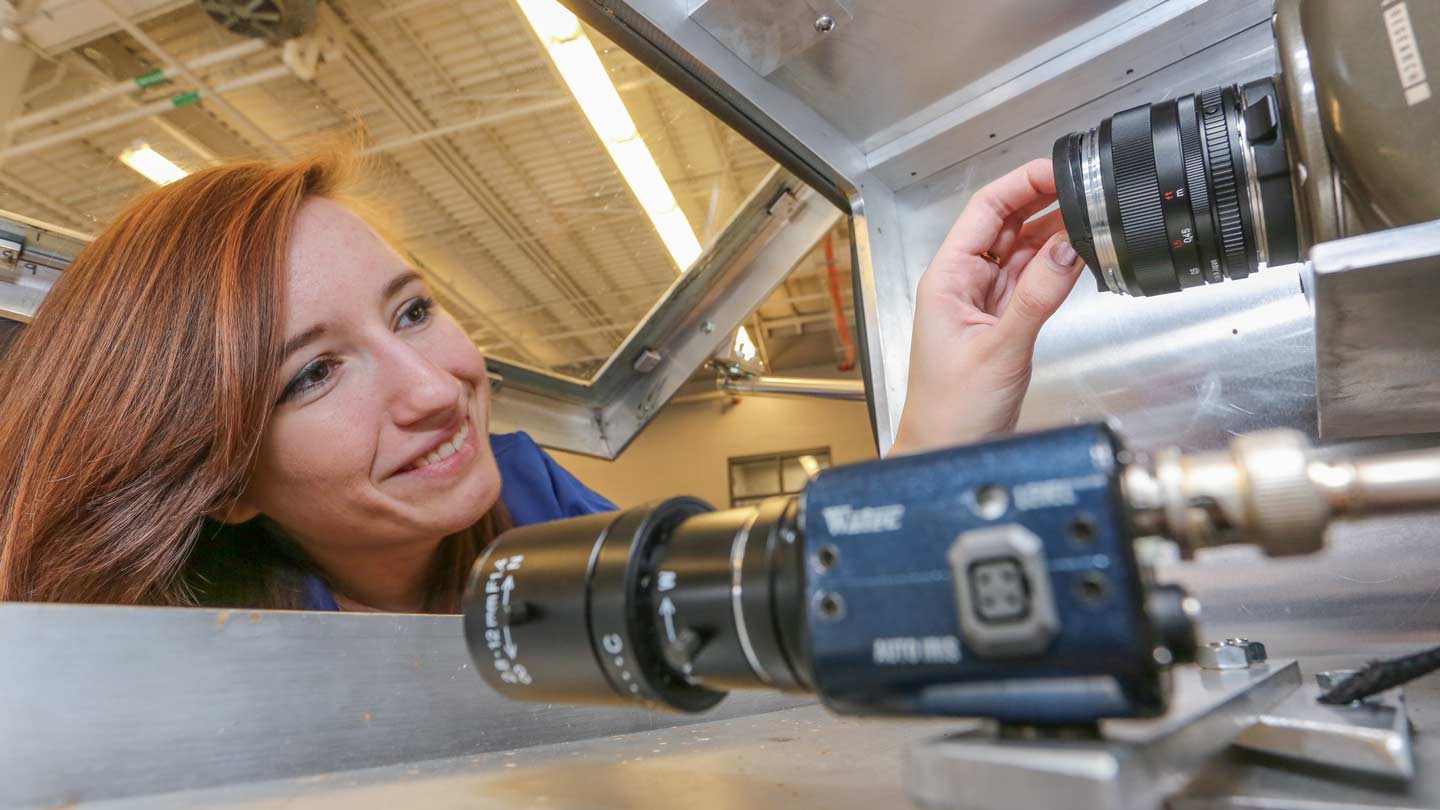 Jacquelyn Ringhausen checks two cameras, one regular and one high speed, used for video of lightning and spectroscopy.

Whether it's crackling "heat lightning" above the clouds of a warm north Alabama summer night or the rare roar of thundersnow in a frozen blizzard, lightning is one of Earth's most common weather phenomena.

How common? A bolt of lightning flashes somewhere on planet Earth almost four million times a day, which works out to one flash every one and a quarter seconds.

For something so common, lightning remains both extraordinary and fascinating. It is powerful, dangerous (killing on average 32 people a year in the U.S.) and - despite decades of intense research - still somewhat mysterious and unknown.

We deal with a scientific topic that’s actually on the mind of every citizen every day.

Scientists in UAH's Earth System Science Center (ESSC) are at the center of international teams studying lightning from several perspectives, from the climatology of lightning around the globe (how much lightning and where), to the fine detail of the physics of how each individual lightning stroke begins, develops and strikes.

Fortunately, they have more than 17 years of data collected by an instrument largely developed by scientists at UAH, the Lightning Imaging Sensor (LIS) instrument aboard NASA's Tropical Rainfall Measuring Mission (TRMM) satellite. Flying in low Earth orbit, LIS sees lightning flashes beneath it as it passes over the tropics and subtropics, from the Equator north and south to about 30 degrees latitude.

After collecting lightning data for more than 17 years, some surprising findings are coming out.

One of the discoveries was the high level of lightning activity over several large lakes, including Lake Maricaibo in Venezuela and Lake Victoria in Africa. Maracaibo earns the title of the world's lightning hotspot, with lightning occurring 297 days (or mostly nights) a year. Lightning there is so common, ancient Caribbean sailors used the flashing storms over the lake as a kind of lighthouse.

While most of Earth's lightning is during the day, when heat from the sun causes convection, Maricaibo is unique, says Dennis Buechler, an ESSC research associate who has been working with LIS data since it was launched. "One of the first things we saw, it was lighting up at night instead of during the day. It's a very warm lake and it doesn't cool at night. The wind flows converge at the surface, which causes a rising motion. And that's the recipe for lightning."

The storms that form over Lake Maricaibo aren't powerful, but are both frequent and long lasting, Buechler says. "We also found some other lakes, like Lake Victoria, where you have this warm lake where you have more lightning at night than during the day."

In one of the first lightning surveys done using LIS data, the Congo River basin was thought to be the hottest lightning location on Earth. But additional years of data let Buechler develop a global lightning grid with finer resolution, about one tenth of a degree per grid square instead of the earlier one half of a degree.

When a colleague at the University of Sao Paulo analyzed the new data grid, it was discovered that each square kilometer at Maracaibo had about 232.5 lightning flashes each year. The next most active spot was near Kabare, in the Democratic Republic of Congo, with 205.3 lightning flashes per kilometer each year.

By comparison, the most active lightning hotspot in the continental U.S. is over the Everglades near Ft. Myers, Fla., with a rousing 79 flashes per square kilometer every year. It ranks 122nd globally.

The lightning climatology developed using LIS will be expanded starting first in August, when a second LIS instrument largely developed and tested at UAH is scheduled to be mounted on the International Space Station, and again in October, when the Geostationary Lightning Mapper (GLM) - which UAH played a major role in developing - is launched aboard the new National Oceanic and Atmospheric Administration (NOAA) Geostationary Operational Environmental Satellite R-Series (GOES-R) weather satellite.

And 17 years of LIS data may serve other purposes. UAH's Dr. Philip Bitzer, an assistant professor of atmospheric science, is using LIS data to learn more about lightning by breaking flashes into their smallest pieces. The goal is to find new ways to forecast severe weather using data from the GLM when it becomes available.

"Most of the research to this point focused on counting lightning flashes and trying to connect changes in the lightning numbers to severe weather events," says Dr. Bitzer. "We propose to dive down below the flash level, to look at the individual parts of the flash.

"We want to look at the more fundamental aspects, to see how lightning stroke properties change, how they evolve and how those changes relate to the parent storm, and whether we can find a way to use that information to relate back to storm dynamics a little better."

A typical cloud-to-ground lightning "flash" is made of several distinct pieces, starting with a weak, dim leader that might climb into the atmosphere in several stages until it connects the positively charged surface to the negatively charged cloud above.

"Then you will see the ground stroke flicker, and that flickering is individual strokes," Dr. Bitzer says. "All of that together becomes a flash."

For instance, a sudden jump in the number of lightning strikes inside a garden-variety thunderstorm might one day give forecasters a tool for predicting severe weather and issuing timely warnings.

The sudden increase in lightning is one sign a normal storm is rapidly evolving into a supercell, with a large rotating updraft (or mesocyclone) at its heart.

Because the sudden increase in lightning strikes happens either at the same time or within minutes of a supercell forming, UAH researchers are developing algorithms that might be used by forecasters to issue timely severe weather warnings.

"We can use the lightning jump as a nowcasting tool for supercells," says Dr. Larry Carey, chairman of UAH's Atmospheric Science Department. "If the meteorology of the day suggests supercells are likely, the jump can tell us when and where that is happening."

Other ESSC scientists are using satellite instruments (not LIS) and Doppler radar to develop tools for forecasting which convective "pop up" storms might soon produce lightning, and when that lightning is likely to begin.

Severe weather research has one inherent advantage over some more esoteric fields: Everyone has to deal with the weather.

"We deal with a scientific topic that's actually on the mind of every citizen every day," says Dr. John Christy, the ESSC director. "That makes it a more exciting and purposeful field to study, because people plan their daily lives based on what the weather might do."