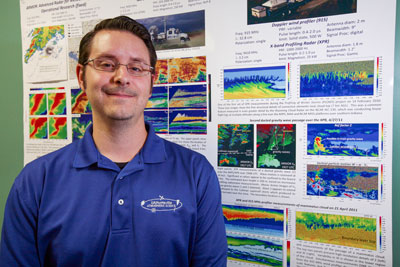 HUNTSVILLE, Ala. (July 29, 2013) - Scientists may be able to better study how supercell thunderstorms work by using the data from just one Doppler radar unit and an analysis technique called synthetic dual-Doppler (SDD) that normally requires two, according to research done by a doctoral candidate at The University of Alabama in Huntsville (UAH).

Student Todd Murphy teamed with UAH atmospheric science professor Dr. Kevin Knupp to make one of the first comprehensive analyses of cold season supercells using only one Doppler radar with the application of the SDD analysis technique. The SDD technique allows researchers to examine the winds inside supercells in three dimensions.

Doppler radar works by sending a beam of electronic radiation that is tuned to a precise frequency at an object. The beam is then reflected back to a receiver. By using a phenomenon known as the Doppler effect, the frequency of the beam when it went out and the altered frequency of it when it returns can be used to calculate the movement of the object.

When developed in the late 1960s and refined in the 1970s, the SDD analysis used one such radar unit for the data needed to provide insights into the dynamic and thermodynamic quantities of a storm and measure wind speed and direction.

However, the ability of SDD to peer inside super-cells can be limited because the storms first must be close enough to radar facilities to be detectable.

"This is certainly a technique that will only work in certain cases," Murphy said. He has personally experienced the limitations when attempting to position UAH's Mobile Alabama X-band (MAX) truck to collect data on approaching storms.

"In the Southeast, with our topography and the trees we have, it is really difficult to position MAX."

The SDD technique allows us to retrieve the three-dimensional wind components of a storm.

Data from the widespread outbreak of cold season supercell storms on Super Tuesday in 2008 provided an opportunity for Murphy and Dr. Knupp to examine using the SDD technique with readings from single Doppler radar facilities.

Nighttime supercells on Super Tuesday 2008 were so widespread that in Tennessee, one in near Memphis and one near Nashville were close enough to single Doppler radar facilities for information about the storms to be obtained. Murphy and Dr. Knupp subjected the data from those single radar facilities to the SDD analysis technique.

"We were trying to find a new way to look at storms," said Murphy. "We feel like with this research, we proved that you can use just one radar source and the synthetic dual-Doppler radar technique to retrieve the winds in supercell thunderstorms.

"The SDD technique allows us to retrieve the three-dimensional wind components of a storm," he said. "It provides us with a lot more insight into what makes up a storm, including data on the vorticity (spin) of a supercell."

Researchers can see what's going on inside storms from about 500 meters off the ground and higher, so SDD provides information on the mid- and upper-level factors that are in turn spawning tornadoes on the ground.

"What we are really looking at is the mesocyclone, or the large movements occurring in the storm," Murphy said. Mesocyclones are huge vortexes of air moving around a vertical axis within a thunderstorm.

Because the radar got better data from the Nashville storm, it was the primary focus of the study. Its structure was very similar to low-top supercells that commonly are spawned as bands surrounding hurricanes, Murphy said.

Murphy's data also affirmed the importance of strong rear flank downdraft (RFD) in the formation of tornadoes. RFDs are the downdraft winds that occur in the trailing portion of the comma-like hook that is typical of storms that spawn tornadoes.

Next, Murphy plans to publish a paper that is a large-scale view of the contributing factors of the Super Tuesday 2008 event as a whole.