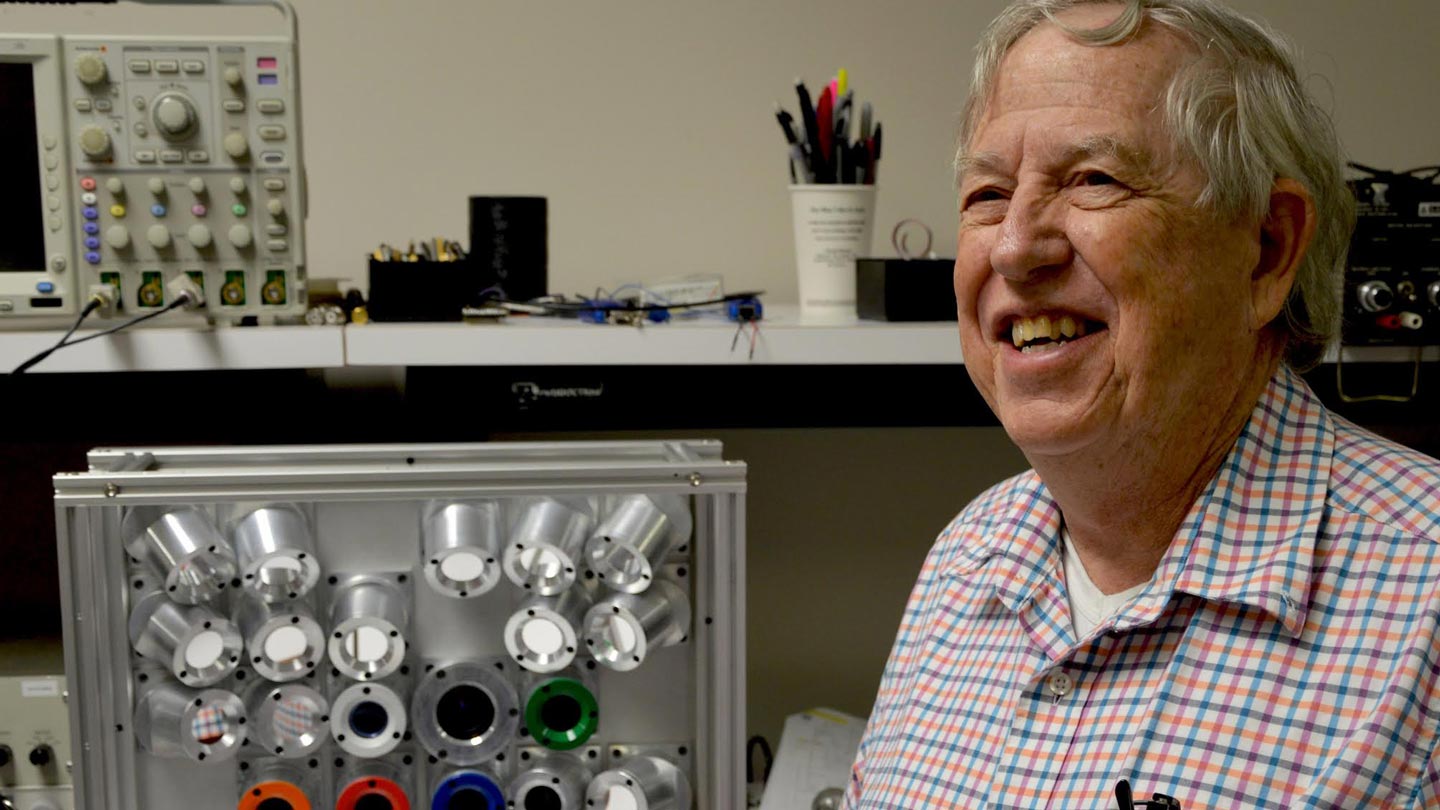 Dr. Hugh Christian, professor of atmospheric science at UAH, with the Fly's Eye GLM Simulator in an electronics lab in the National Space Science and Technology Center at UAH.

Designed to test and validate a lightning sensor set for launch into geostationary orbit in November, a set of sensor "eyes" is nearing completion in labs at The University of Alabama in Huntsville.

These sensor eyes, however, are cross-eyed.

The Fly's Eye GLM Simulator (FEGS) was conceived to be much like a fly's compound eye, with sensors in the middle looking down and those nearer the edges looking farther out. That would allow the sensors to see lightning anywhere beneath the high-flying NASA aircraft carrying the instrument package far above a storm.

Then it was found the aircraft window the sensors will see through is only 16 inches across, much smaller than the instrument. It was time for plan B.

"We had to design it so the sensors in each corner look across through the window at the opposite corner," explained Mason Quick, a NASA post-doc working on the project in the lightning group of UAH's Earth System Science Center. "Then, when we collect the data, we will have to flip the pieces to put together an image that makes sense."

FEGS first task will be to check the Geostationary Lightning Mapper's performance. GLM is scheduled for launch Nov. 4 aboard NOAA's GOES-R geostationary weather satellite. The first lightning sensor designed to operate from such a high orbit, GLM will see lightning flashes over much of the western hemisphere.

FEGS is designed to see lightning in thunderstorms within the GLM field of view, to test and validate that GLM is seeing the lightning it should see, said Hugh Christian, the UAH lightning group leader who conceived the ideas for both GLM and FEGS. Because of GLM's wide field of view, "any storms you fly over with FEGS, GLM will see."

The FEGS instrument is scheduled for shipment within the next week or ten days to NASA's Armstrong Flight Research Center in California, where it will be mounted aboard NASA's ER-2 research aircraft.

"This is an update of a concept we used back in the 1980s that we then used to design both LIS (an instrument that flew aboard the TRMM satellite for 17 years) and GLM," Christian said. "The dual optical pulse sensor had only two photometers and flew on the U-2."

FEGS includes 30 photometers set to several specific wavelengths of light, plus a wide-spectrum camera. Twenty-five of the sensor instruments are tuned to see light emitted by neutral oxygen when it is heated by lightning. That is the same wavelength of light the GLM instrument will detect.

"FEGS will have test flights this month, then validation flights will probably start in March, after GLM is set up and tuned," Christian said. "Those flights will mainly be out of Georgia and fly over the Southeast and the Midwest, but there will be other flights in the future."

In addition to FEGS, the instrument package aboard the ER-2 will include sensors to detect gamma ray flashes caused by lightning, and to measure the change in the Earth's electric field from before the lightning process begins until it ends. Other instruments will measure the atmosphere's conductivity, to help scientists calculate the electric current a storm is generating.

With the exception of a gamma ray detector built at the University of Bergen in Norway, all of these instruments were designed and built at UAH.