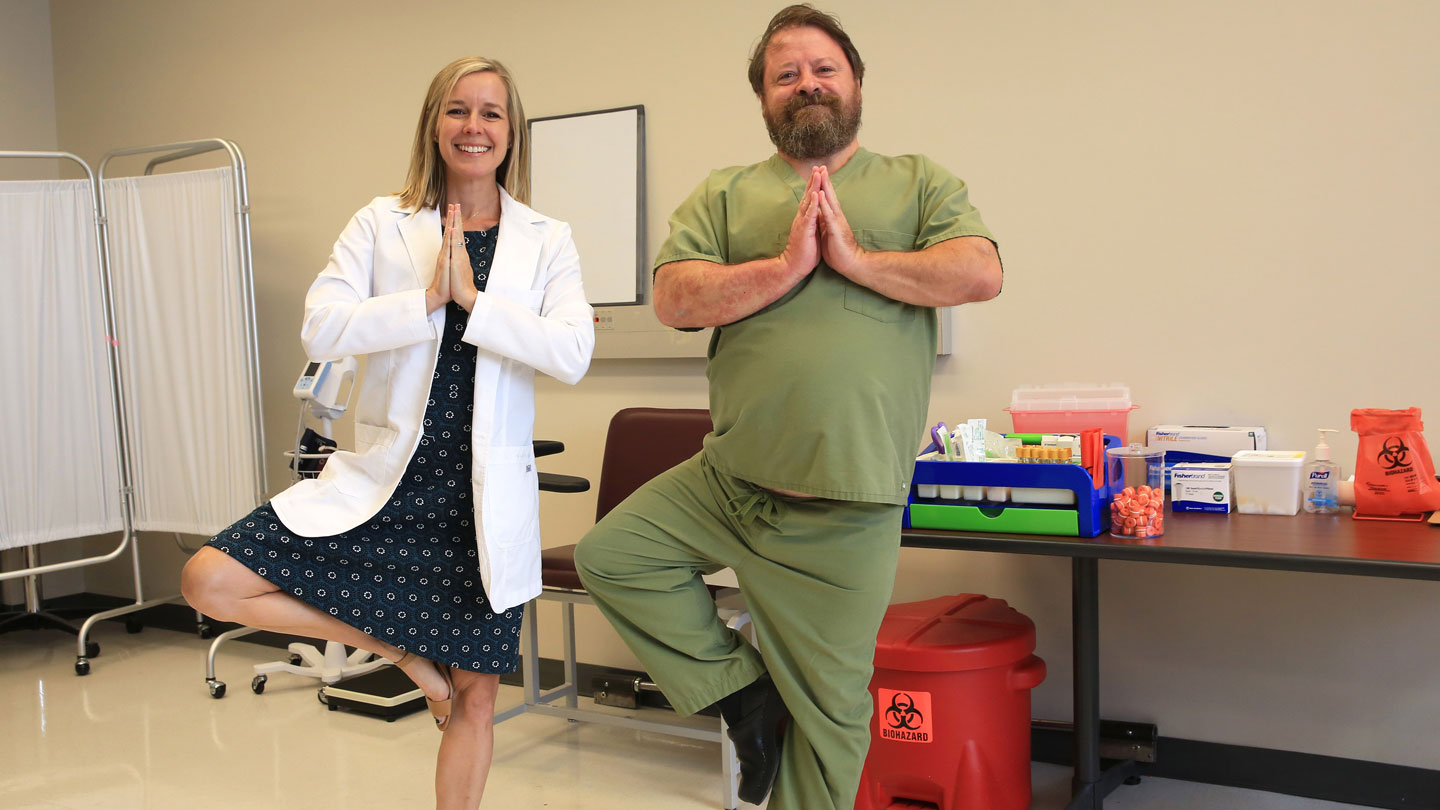 Dr. Shannon Mathis and Dr. Gordon MacGregor partnered on a study to investigate the effects of hot yoga on bone mineral density.

Bikram yoga, the most commonly practiced type of hot yoga, offers practitioners a vigorous workout in a studio kept at 100°F or more. But is working out in that much heat good for you? That’s what Dr. Shannon Mathis and Dr. Gordon MacGregor, two professors at The University of Alabama in Huntsville (UAH), decided to find out with a cross-college research project entitled "Calcium Lost Through Sweat: Is There Evidence of Bone Remodeling Due to Cutaneous Calcium Loss during Bikram Hot Yoga?"

As a regular practitioner, it was Dr. MacGregor’s yoga practice that first got him thinking about the study. "When you do hot yoga, you sweat a lot, and I wanted to know exactly what was lost in that sweat," says the assistant professor of biological sciences. "Then Shannon joined the faculty, and she is an expert on calcium, bone loss and exercise."

Indeed, as an assistant professor in the Department of Kinesiology, Dr. Mathis brought not only a Ph.D. in health and human performance to the partnership, but also a strong research background on the topic of bone mineral density (BMD); her dissertation, entitled "Osteogenic Effect of Endurance Cycling," investigated the factors that contribute to low BMD in male competitive cyclists.

Bikram yoga appears to be a safe practice for premenopausal women.

From that study, Dr. Mathis had established that sweating during high-intensity exercise causes a disruption in calcium homeostasis leading to bone resorption and low BMD in endurance athletes. But was the same true of people who practice hot yoga? To find out, she and Dr. MacGregor decided to focus on one specific group already at risk for calcium loss but among whom the practice has become an increasingly popular form of exercise – premenopausal women.

"We know that exercise in a hot and humid environment causes a large loss of calcium in sweat, and that premenopausal women already show an average loss of 0.25-1 percent annually due to hormonal changes that alter calcium levels," says Dr. Mathis, who received a 2017/2018 New Faculty Award earlier this month. "What we wanted to find out was whether additional losses of calcium in sweat caused by multiple sessions of hot yoga per week would further decrease their BMD and increase the risk for bone fractures."

Funded with a cross-college faculty research award from the university for $5,000 and in partnership with Carmeladell Watkins, owner of Bikram Hot Yoga Huntsville, they enlisted eight premenopausal women with a mean age of 47.4 years who had practiced hot yoga for about two years. "We measured their nude body weight, fluid intake, and blood samples before and after a session of Bikram yoga, which consisted of performing 26 postures in 90 minutes at 105°F and 40 percent humidity," says Dr. MacGregor. "We asked participants to press chromatography paper against the thighs to collect sweat after the final yoga pose, while participants were still inside the studio." 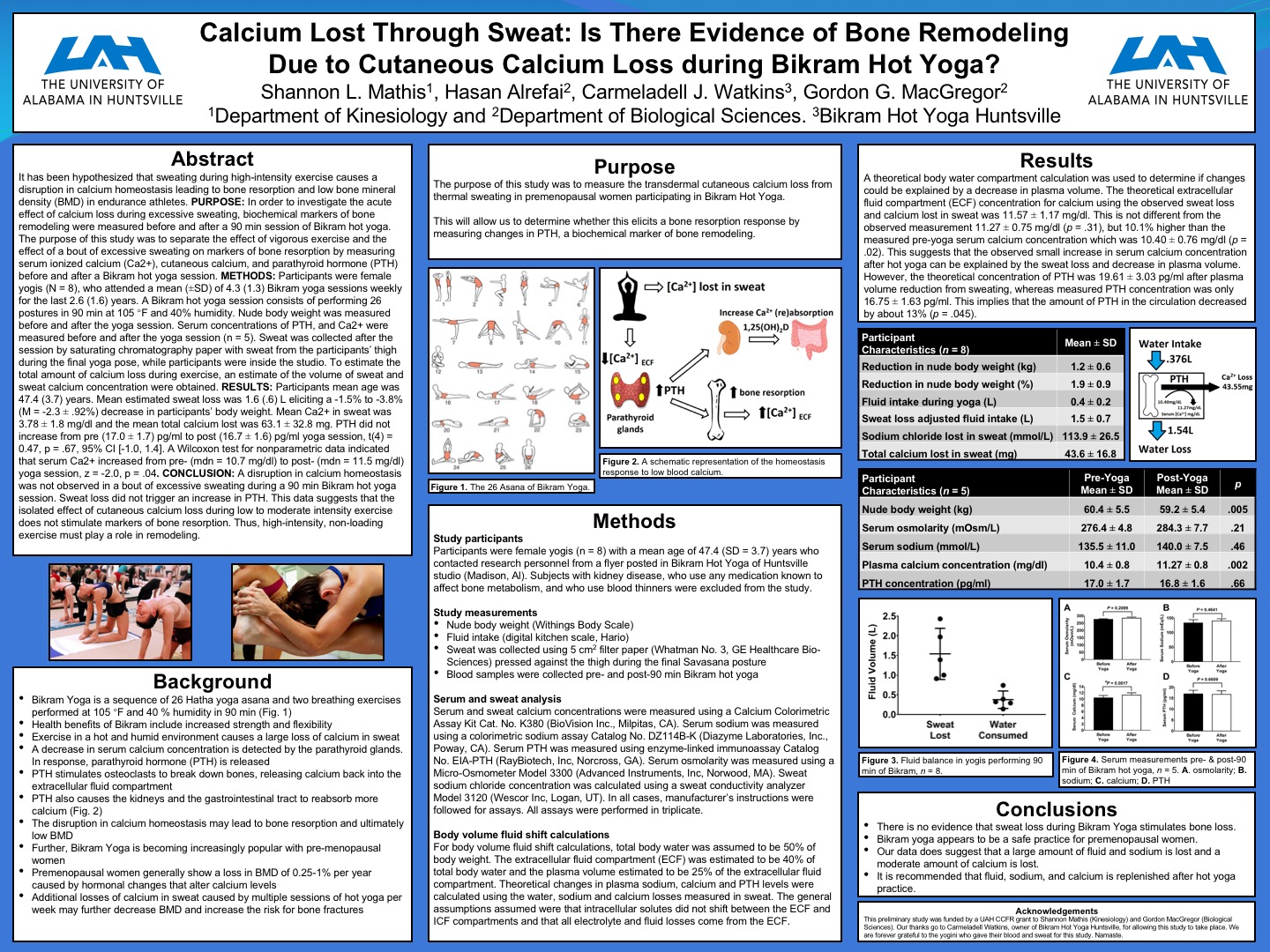 The pair presented their findings at the American College of Sports Medicine’s annual meeting this past spring.

By taking measurements both before and after, they were then able to determine the amount of cutaneous calcium lost through sweating and to use the blood collected to measure both the total calcium and levels of serum parathyroid hormone (PTH), a biochemical marker of bone remodeling.

As Dr. Mathis explains, PTH is released by the parathyroid glands when they detect a decrease in calcium, stimulating osteoclasts to break down bones and release calcium back into the extracellular fluid compartment. It also causes the kidneys and the gastrointestinal tract to reabsorb more calcium, resulting in what’s known as a disruption in calcium homeostasis, which in turn can lead to bone resorption and ultimately low BMD.

What they found, however, surprised them both. "Our original idea was that people were going to be sweating out a lot of calcium and their bones would start to break down for the body to maintain its calcium levels," says Dr. MacGregor. "But as it turns out, while there’s a lot of salt lost in sweat, only just a little bit of calcium is lost. So it was the opposite – hot yoga is actually really good for your bones." Dr. Mathis concurs. "Bikram yoga appears to be a safe practice for premenopausal women," she says, "though we still recommend that fluid, sodium, and calcium are replenished after hot yoga practice."

The pair presented their findings this past spring at the American College of Sports Medicine’s annual meeting in Denver, Colo., and will soon submit them for publication. They also hope to conduct a follow-up study to determine if there’s some sort of "protection mechanism" that the body is able to deploy to prevent bone damage and retain bone mass. "Other researchers across the country have come to the same conclusion that we have, that it’s not the calcium lost through sweating that is causing low BMD in these otherwise very healthy people," says Dr. Mathis. "So that may be what’s next for us."