Could our diet while growing up affect our offspring’s vitality?

You are what you eat - and so are your offspring. And in the title bout featuring protein versus sugar, protein is the winner.

That's what a researcher at The University of Alabama in Huntsville (UAH) found while studying the fruit fly (Drosophila melanogaster) as part of a multi-institutional team.

In a finding that may have application to human beings, the scientists discovered that a larval diet that's predominantly protein is better than a diet of sugar when it comes to the reproduction and development of the next generation of the small flies, which count humanlike metabolism among their many biological similarities.

The scientists adjusted the proportion of yeast to sugar in the flies' diet to devise protein-rich or sugar-rich food sources. Comparing both diets, the researchers discovered that mother flies that grew as larvae on a protein diet had greater fecundity and offspring possessing greater metabolic reserves than females grown as larvae on a diet that was predominantly sugar.

"We definitely saw a significant effect," said Dr. Luciano Matzkin, assistant professor and director of the graduate program in the UAH Department of Biological Sciences. "We saw that maternal larval diets higher in protein increased the overall fecundity of the adult mother, the number of eggs she produced, and also had a beneficial effect on the next generation, the F1 generation of offspring."

When researchers returned F1 larvae to a typical banana puree lab diet fed to fruit flies, it did not change the beneficial effects that the maternal larval protein diet had conferred on the F1 generation.

This basic research has applications to humans and other species, Dr. Matzkin said. "This is basic research, to understand how a species adapts. Our research is very multifaceted and allows us to then have insights into many different species." 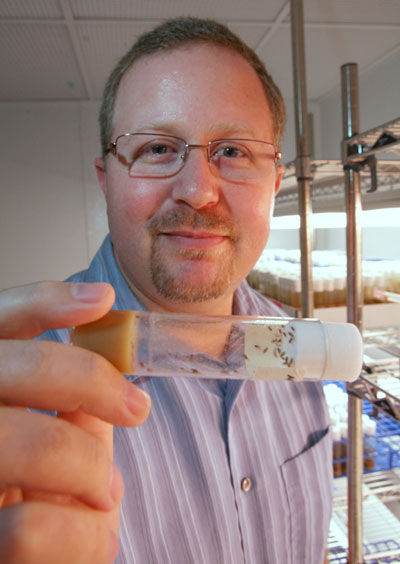 Dr. Luciano Matzkin studies generations of fruit flies to find out the effects of the larval diet that maternal flies consume on the next generation's vitality.

The dramatic change in the human diet since the Industrial Revolution "to where we have almost pre-digested food" has altered human nutrition, Dr. Matzkin said. Along with other environmental factors, the changes may influence a range of childhood and adult health outcomes, he said, such as the rise of asthma, allergies, juvenile onset diabetes, obesity, cardiovascular disease and metabolic syndrome.

"We know that the environment in which an organism develops can affect the performance of that organism. And we know that human beings have shifted their diet dramatically," said Dr. Matzkin. Here is where the similarity of the metabolic structure of the flies to humans raises the question: Could it be like a canary in a coal mine?

Geneticists are fond of the Drosophila species of flies because they have so many biological similarities to humans and many successive generations can be bred quickly, which speeds their work.

The flies have a genomic match for about three quarters of human disease genes and about half of their protein sequences have mammalian homologs. The fly is a genetic model for a number of human diseases, as well as being used to study aging, immunity, diabetes, cancer and drug abuse.

Fruit flies create a new generation every two weeks, said Dr. Matzkin. "Drosophila are a good species to study because they can be easily manipulated in the lab," he said, and the flies' growth rates and life cycles are well documented under controlled environments. "It's one of the genetic workhorses."

Next up is a proposal to the National Institutes of Health to do a follow-up study comparing the effects of the diets of Drosophila melanogaster and the cactophilic Drosophila mojavensis. The cactus flies live on rotting cactus and have a high intake of toxic compounds, such as alkaloids. They use the same set of genes humans use to detoxify themselves, which is important to cancer research because cancer cells have heightened detoxification response that often requires use of larger dosages of drugs. Documenting the effect of diet and understanding how the cactophilic Drosophila survive in their harsh environment could potentially lead to new therapies.