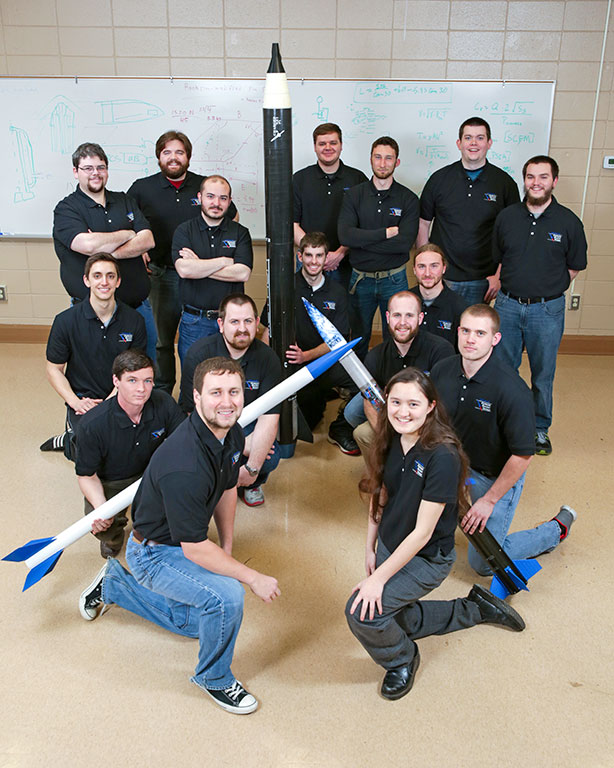 UAH’s Charger Rocket Works team is building a new rocket to compete in the NASA student rocket launch that will take place on the Bonneville Salt Flats.
Michael Mercier | UAH

HUNTSVILLE, Ala. (Feb. 10, 2014) - A completely redesigned rocket will soar aloft when The University of Alabama in Huntsville's Charger Rocket Works team competes in the NASA Student Launch this spring at Bonneville Salt Flats, Utah.

Prometheus, the moniker bestowed upon the craft by the team, is bigger and all new, said Systems Integration Project Lead Ken Le Blanc.

"Everything is completely redone in the team's rocket design this year because we are involved in two projects at the same time," Le Blanc said. Under the supervision of Dr. Robert Frederick Jr., Dr. David Lineberry and Jason Winningham, the team is currently in the design finalization and early testing portion of the build.

Prometheus is being developed for the NASA Student Launch and as part of a multi-year NASA program for Nano Launch 1200, Marshall Space Flight Center's vision for smaller, lower-cost launch vehicles to deploy cube satellites. The idea is to arrive at designs that will provide lower-risk, faster access to space. The program allows several universities to enter into a competition of ideas with concepts they devise, which if shown to be viable, will be incorporated into the Nano Launch 1200 design.

Under Nano Launch 1200, the UAH team is designing a subscale version of the Nano Launch vehicle to assess it's aerodynamic characteristics in the transonic flight regime (between Mach .7 to Mach 1.2) using hobby rocketry components. The rocket is designed with a speed goal of Mach 1.4 from general specifications provided by NASA, which is trying to keep the process as open-ended as possible, Le Blanc said.

"That's really cool, because it means that we might actually have some real influence in what they'll eventually fly," he said. "The same rocket that we'll use to collect the data for Nano Launch 1200 will fly in competition with the NASA Student Launch."

The same rocket that we'll use to collect the data for Nano Launch 1200 will fly in competition with the NASA Student Launch.

NASA's Student Launch is a research-based, competitive and experiential exploration project that provides relevant and cost-effective research and development to support the Space Launch System, NASA's heavy-lift vehicle effort to provide an entirely new capability for human exploration beyond Earth orbit. Supported by the Human Exploration and Operations Mission Directorate and U.S. aerospace industry, NASA Student Launch is a NASA-conducted engineering design challenge to provide resources and experiences for students and faculty.

The NASA Student Launch deadlines are what are driving the team's development efforts now. The larger craft will carry three payloads and use a Level 3 motor, the largest classification of solid-fuel hobbyist rocket motors available.  Payloads developed by teams will address research needs of different subsystems on the SLS. The teams will share the research results, which will be used in future design and development of SLS and other projects.

This year's Launch will allow students to fly as high as a 20,000-foot ceiling. All payloads must be recovered at launch completion.

One UAH payload will again include the dielectrophoresis experiment that was the sole payload on last year's rocket. "It uses electric fields to collect liquid propellants and oxidizers away from the tank walls in space flight," Le Blanc said. "By keeping them away from the walls, we can reduce the heat transfer from the propellant into the tank walls so that there is less loss of cryogenic propellants due to propellant boil-off during long space missions."

A second payload will test the supersonic flight effects on the adhesion of paints and coatings on the rocket itself, with two kinds of paint being tested, as well as temperature-sensitive tapes that will be adhesion-tested because they could have value in a variety of future experiments.

The third payload is NASA required. It is a landing hazard detection system incorporating a camera and onboard computer system to identify and analyze hazards in the landing zone. Again, NASA has been intentionally open-ended setting the parameters.

"They said, 'Let's see what people define as a hazard,'" Le Blanc said. "What this whole competition is about now is, it's all research for the SLS."

Besides the three contest payloads, the rocket will collect the majority of its aerodynamic data for the Nano Launch 1200 contract while in Student Launch Initiative flight, Le Blanc said. The Charger Rocket Works team will get a chance to fly twice before the competition in Utah, the first being a no-payload rocket test and the second a fully-loaded test launch.

The Charger Rocket Works effort is being supported by the Alabama Space Grant Consortium, http://www.uah.edu/ASGC/.