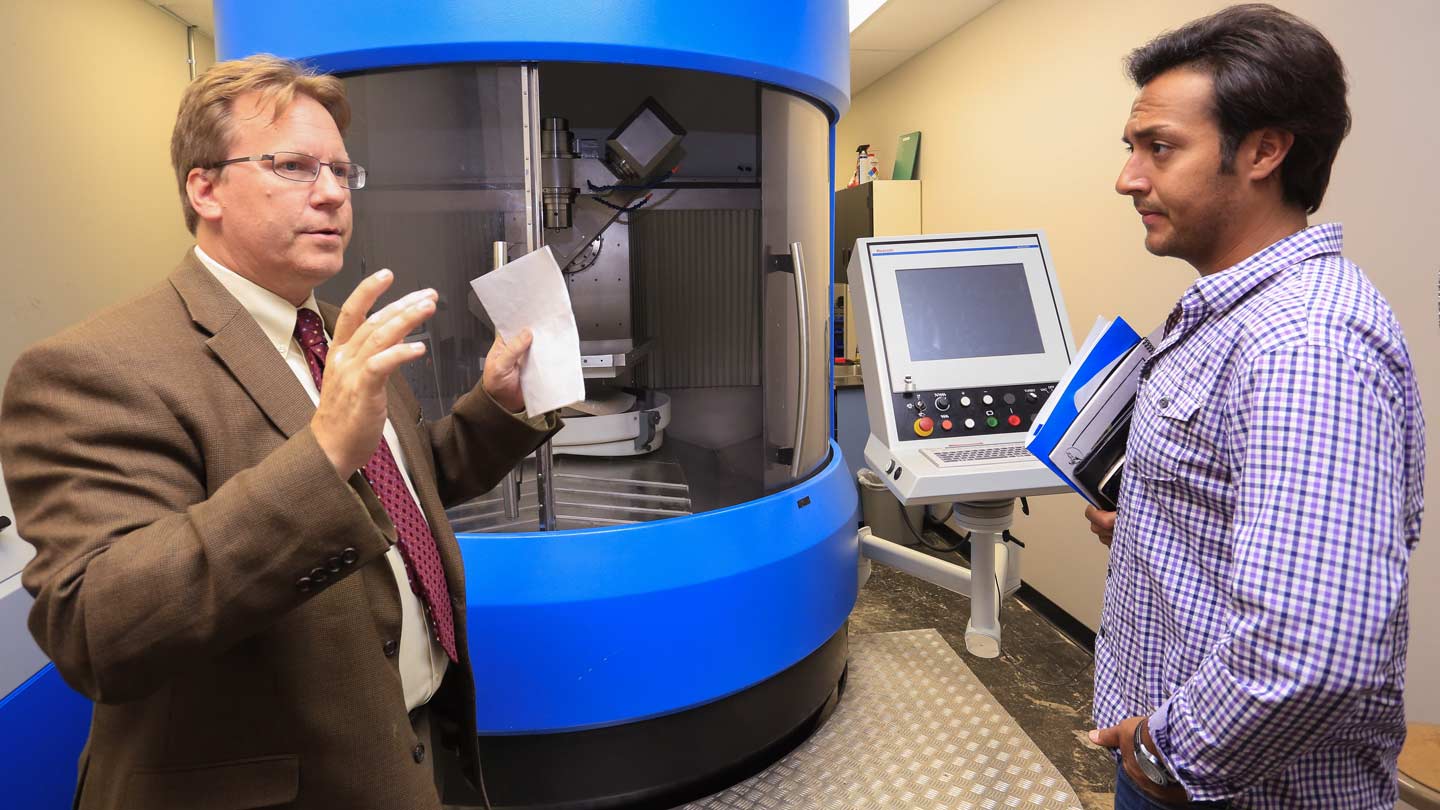 Combining classical optics research with nano and micro devices, the UAH Center for Applied Optics (CAO) continues its 30-plus year legacy as a gateway between industry and academia. Dr. Patrick Reardon, associate CAO director and assistant professor in the Electrical and Computer Engineering Department, says its goal is to advance optical science and engineering research and development in support of high technology educational, industrial and government programs.

"We design elements, systems, and fabricate optical elements and systems. Then we help in their deployment and operation in the field."

For example, a company approached the CAO for help after winning a proposal from the Defense Advanced Research Projects Agency (DARPA) to develop a high resolution, wide field of view persistent aerial surveillance system.

The Center for Applied Optics is an exciting place to work because our researchers have been developing innovative solutions in both large optics that can map the earth and space as well as photonics that can sense binding events on the nanoscale.

"The company's specialty was writing software that allows you to take a virtual tour of homes, and somehow they won a DARPA contract to build a camera," Dr. Reardon says. "They knew which detectors they wanted to use but needed our help to make it work. We developed optical systems that flew and provided good imagery."

The purpose, he says, was to allow a system to record a full day of video over a city at very high resolution for use as a forensic tool. If a criminal or terrorist event occurs, it can help track the offenders both before and after the event.

"The patent on it just came through," Dr. Reardon says. "Our tasks were to figure out the optics and optomechanical side, and we succeeded. We had the system completed in eight months, so it was a very quick project."

Dr. Reardon says the CAO has promoted the device as a camera system for rapid mapping.

"It can be used in defense applications, and one of the groups we've talked to is the Alabama Emergency Management Agency (AEMA). Their interest is rapidly documenting large areas of devastation from a tornado or hurricane with lots of high-quality imagery."

Dr. Reardon says it can be especially useful if several devastating storms occur within a short time period.

"AEMA needs to be able to determine which storm caused the actual damage at a site to avoid complications with federal funding," he says.

Meanwhile, at the CAO's affiliated Nano and Micro Devices Center (NMDC), research scientist Dr. Yongbin Lin is developing a supersensitive nanodevice that will provide extremely early detection of cancers and other diseases in a small package, about the size of a lunchbox.

The nanodevice holds promise for early disease detection in developing countries that can't afford elaborate equipment and offers U.S. patients the prospect of faster test results during an in-office procedure at their doctor or other point-of-care provider.

"We don't have to send your blood sample anywhere," says Dr. Lin. "We just bring this to your bedside."

The sensitivity of the equipment holds promise for finding cancer at a very early stage, even while it is at a small cluster of cells level, says Dr. Lin. "At that stage, it is easier to treat."

A nanoprobe that's 125 microns in diameter with gold nanodots on a 4-micron fiber core is at the heart of the machine. The probe is coated with a biochemical link so that specific antibodies for the particular test will attach to it.

"The Center for Applied Optics is an exciting place to work because our researchers have been developing innovative solutions in both large optics that can map the earth and space as well as photonics that can sense binding events on the nanoscale," says Dr. Robert Lindquist, UAH associate vice president for research and economic development and CAO director.

The NMDC is a national user facility that specializes in leading technology and innovation on a broad range of micro and nano projects. State-of-the-art facilities allow cutting-edge research and development of devices and components that require nano- and microfabrication.

Funded through grants and contracts ranging from small business to government, the CAO is made up of 15 faculty and staff, plus other affiliated faculty and staff from other UAH academic departments.

The CAO provides optical and optomechanical design and analysis, optical fabrication (including diamond turning and CNC polishing to make parts up to 0.3m and 0.7m diameter, respectively), optical metrology, holography, and testing and prototyping of state-of-the-art optical components and systems, in addition to its comprehensive 7,000-square-foot clean room facilities.

Dr. Reardon says that often graduate and master's level students work on Graduate Research Assistantships (GRAs) at UAH through grants from the National Science Foundation, NASA and the U.S. Army.

"Some students just like to do research projects," Dr. Reardon says. "This is how we bring students into the process. In fact, last spring, I guided a Senior Design Class team from UAH's OPE (Optical Engineering) program to create a phone app that can perform optical testing of a mirror. It was a fun project for the students, and it provided some great preliminary results on a research path I'm interested in."

The experienced faculty and laboratory resources make the CAO an ideal place for research. The UAH Optics Building was designed and built for optics research with its central core of laboratories, which are vibration isolated from the office and student spaces.

Among the many projects at the center, he says, researchers are currently evaluating the characteristics of air turbulence and ways to correct it.

"When you look at the stars, they twinkle and it's very pretty," Dr. Reardon says. "But that twinkling causes problems for people who want to do astronomy because the atmosphere affects the propagation of light.

"Sometimes it gets to you, sometimes it goes to another location. Instead of collecting light, we want to be able to project light in optical communications and in laser weapons. If you want to direct a lot of laser energy on a target you need to be able to account for the atmosphere."

Another major project for the CAO is the optical development and testing of the 18 primary mirror segment of the NASA James Webb Telescope (JWST) to make sure the telescope sees everything it should see. The observatory is designed to look at stars and galaxies on the distant edges of the universe. It is scheduled to launch in 2018.

The mirror is made of beryllium and has to withstand the extreme cold of outer space. Getting a perfect mirror for the telescope meant testing them at their eventual operational temperature (35K or -400F) in conjunction with Marshall Space Flight Center's X-ray Calibration Facility. During testing the mirror deformed under the extreme cold conditions.

"Our job was to measure the deformation induced by the cryogenic temperatures. If a bump formed when cold, the mirror was then polished down at that spot, the opposite of the bump, so that when it gets cold in space, it cryo-deforms into the correct shape," Dr. Reardon says. "Those mirrors were completed two years ago, with the CAO's Dr. James Hadaway leading the effort. He is still working on JWST, supporting the full telescope testing in Houston."