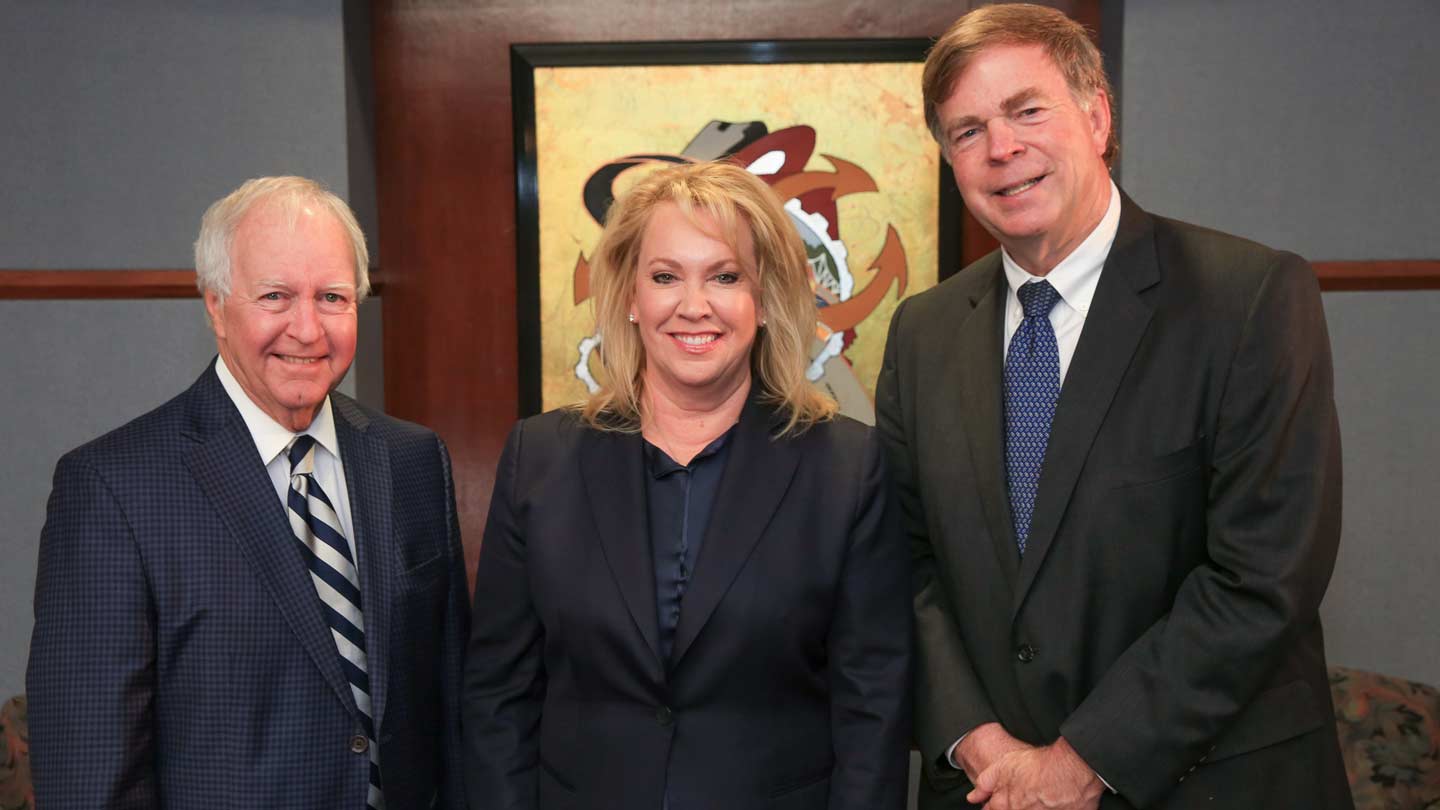 At a ceremony held this morning at the Chamber of Commerce of Huntsville/Madison County, Aerojet Rocketdyne CEO and President Eileen Drake announced a $1 million endowment to establish the Aerojet Rocketdyne Chair in Space Science at UAH. She was joined by UAH President Robert Altenkirch (left) and Huntsville Mayor Tommy Battle (right).

"Aerojet Rocketdyne is proud to be able to partner with The University of Alabama in Huntsville on numerous R&D initiatives related to propulsion and space science," said Eileen Drake, CEO and President of Aerojet Rocketdyne, including the establishment of an endowment to fund an academic chair for Dr. Gary Zank.

Dr. Zank is director of UAH’s Center for Space Plasma and Aeronomic Research (CSPAR) and the chair of the Department of Space Science and will be the first scholar named to the endowed chair. Already a UAH eminent scholar and distinguished professor, Dr. Zank was recently elected to the National Academy of Sciences, which is one of the highest honors a scientist can receive.

"Dr. Gary Zank is an international rock star in the study of space science, and we’re looking forward to our partnership with him and UAH to advance the critical knowledge and scholarship in this field," Drake said.

"Becoming a leader in the field of space science is one of the strategic priorities for the university, and this endowment will go a long way toward helping us achieve that objective," said UAH president Dr. Robert Altenkirch. "We are grateful to Aerojet Rocketdyne for their support of our Department of Space Science – and our university as a whole – as we seek to grow our contributions to such a vital field of academic research."

Aerojet Rocketdyne is expanding its presence in Huntsville in a big way. Company CEO and President Eileen Drake announced that the company has consolidated six business units into two: Space and Defense. A key aspect of the alignment was to place Aerojet Rocketdyne’s newly formed Defense Business Unit headquarters in Huntsville, along with the company’s Defense Advance Programs, known as the Rocket Shop℠. These moves are designed to build upon Aerojet Rocketdyne’s existing Huntsville work in defense and space with customers such as the Missile Defense Agency, the U.S Army, NASA, Boeing, Lockheed Martin, and Raytheon.

In an announcement in January, Drake cited "the top-tier talent at The University of Alabama in Huntsville’s Propulsion Research Center, the exceptional level of rocket engine expertise at NASA’s Marshall Space Flight Center and at our teammate, Dynetics" as reasons for the company’s expansion in Huntsville.

Aerojet Rocketdyne also announced in April that the company is bringing 800 new jobs to Huntsville and building a state-of-the art factory where those workers will produce its next-generation ARI rocket engine.

The announcement of the endowment was made in conjunction with UAH’s spring graduation ceremony, during which Eileen P. Drake delivered the commencement address.