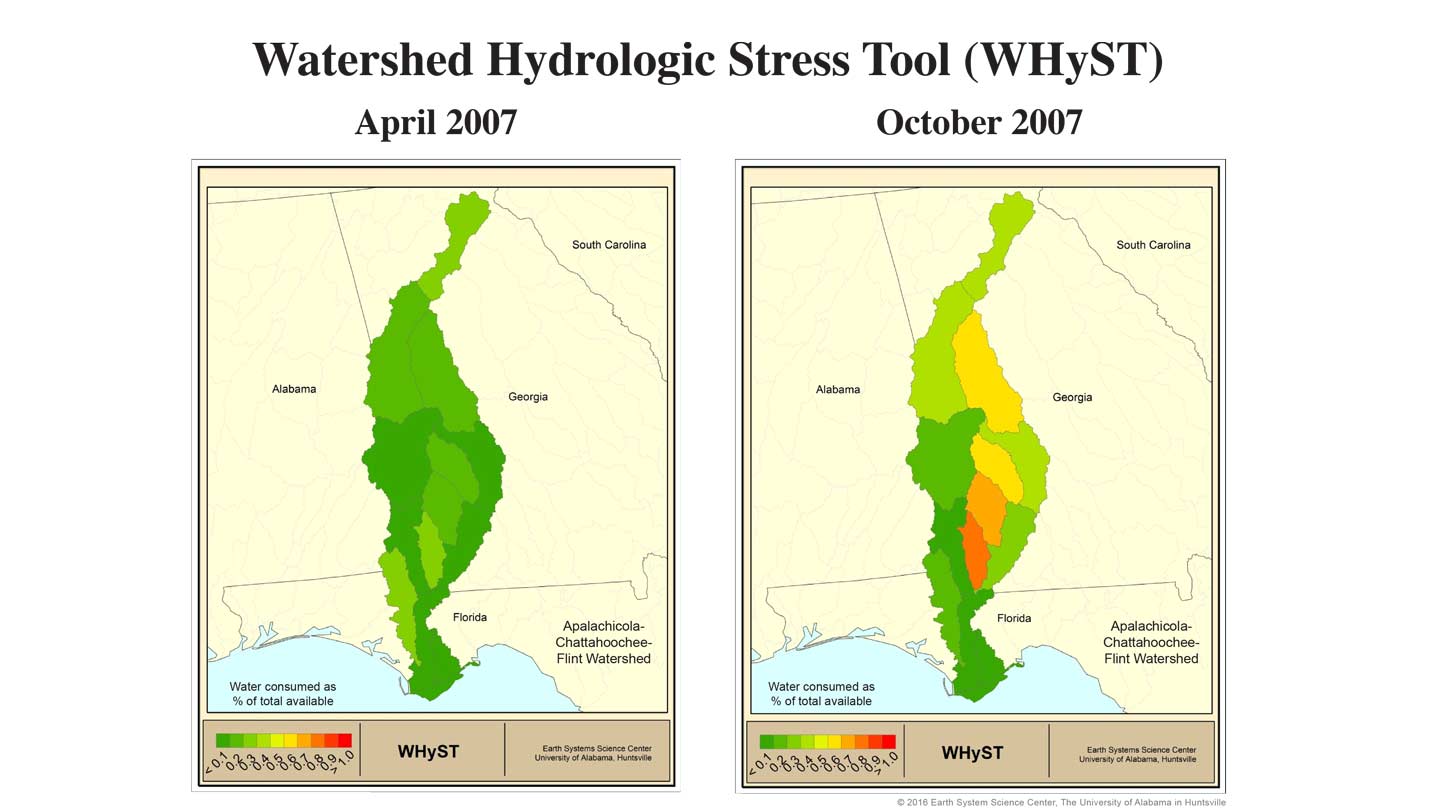 The Watershed Hydrologic Stress Tool produces a near real-time snapshot of water use and drought stress potential in a given watershed.

An experimental tool to give farmers, government officials, environmental groups and other stakeholders an improved estimate of how much water is available in a specific watershed is scheduled to go on line this summer.

Developed in the Earth System Science Center (ESSC) at The University of Alabama in Huntsville (UAH), the Watershed Hydrologic Stress Tool (WHyST), a coupled crop/hydrology model, uses data from NOAA and NASA weather reports, crop and hydrology models, and water consumers such as city water systems and power companies to produce an accurate, near real-time snapshot of water use and the potential for drought stress in a given watershed.

Beginning this summer as a proof of concept, UAH researchers will use WHyST to report each month on water stress in the Apalachicola, Chattahoochee and Flint rivers watershed. The ACF watershed stretches from the foothills of the Smokey Mountains in north Georgia to the Gulf of Mexico, covering parts of Georgia, Alabama and Florida.

"Our long-term goal is to have tools like this across all of the basins in Alabama, so we would have better ideas about the water supply," said Cam Handyside, an ESSC research engineer. "But to begin, we're coupling our crop model to the hydrology model to get a dynamic snapshot of water availability in the ACF basin."

One of several project goals is to better measure the water supply impact of irrigated farming, especially in southwest Georgia. A second goal is to estimate crop loss due to drought for non-irrigated farmers.

"Irrigation is a unique user," Handyside said. "Unlike public water systems and power stations, which return most of their water to the river, with irrigation you can assume almost of none of that water is making it back to the river."

The WHyST report will initially be released each month during an ACF drought assessment teleconference hosted by the Water Resources Center at Auburn University under the auspices of NOAA's National Integrated Drought Information System.

In addition to providing up-to-date information, the UAH team also will provide historical context. Using historic data on weather, agriculture and population, a historic dataset has been produced so current conditions can be compared to what happened in the past.

"It's sort of like today in history," Handyside said. "We ran this using 100 years of data, so we're able to put current conditions in historic context. We can say whether something is abnormally wet or dry, or whether, for instance, we're in the top such-and-such percent of droughts in the past 100 years."

WHyST's rollout is supported by a two-year grant from NOAA.