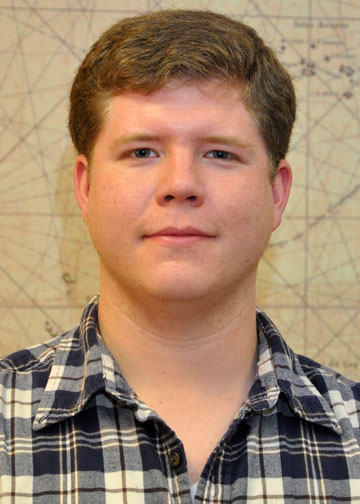 HUNTSVILLE, Ala. (March 22, 2014) – Since his formative years in the small town of East Burke, Vt., Casey Calamaio has amassed quite a few interests, including aviation, environmental sciences, and cartography.

But even more impressive, he's been able to turn those interests into the foundation of his research as both an undergraduate and a graduate Earth System Science major at The University of Alabama in Huntsville (UAH).

Calamaio's specialty is geographic information systems (GIS) and remote sensing using model aviation as an aerial observation platform. "A powerful cartography tool," he says he was first introduced to it as a freshman majoring in aerospace engineering.

"It was part of an elective course called 'Collapse of Civilization' with Dr. Tom Sever, and I instantly wanted to know everything about it!" he says. By the following year, he'd changed his major and began working as a student researcher in UAH's National Space Science and Technology Center.

And while at that job, Calamaio was offered the chance to participate in UAH's annual research and study abroad program in Panama. "Dr. [Rob] Griffin asked if I'd be interested in helping the Smithsonian Tropical Research Institute to catalog aerial photos of the Panama Canal taken from the 1920s to the 1980s," says Calamaio, an amateur pilot and former Civil Air Patrol member. "I said, Absolutely!"

The goal was to preserve the intrinsic value of the photos by scanning them into a database and to map the flight paths used to take them. "We'd look for a feature in the Canal Zone that we recognized to order them," he says, "and then we used a paper map or Google Earth to figure out where they were taken."

After that, he and his fellow researcher Zach Langford were able to georeference the photos using GIS and apply coordinates to select locations. "That allowed us to compare them with contemporary satellite images to determine how land cover had changed in Panama over the years," he says.

And how had it changed? "In some places there were more trees because of protected areas and forest policies," says Calamaio. "But in other places, deforestation was occurring due to illegal agriculture, the growth of cities, and the invasion of canal grass." 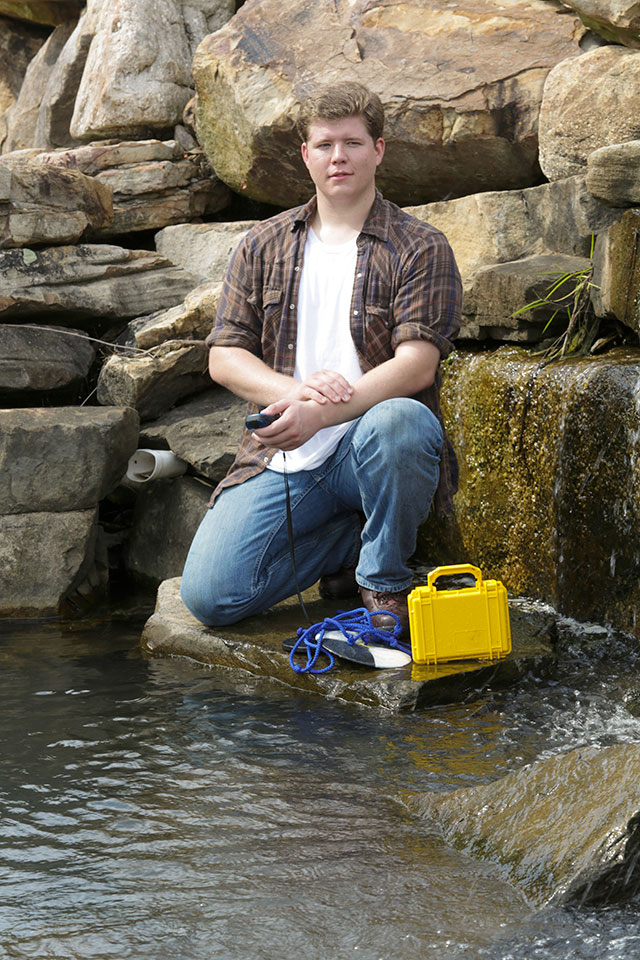 Canal grass, he explains, is a cane grass from the Himalayas that was originally brought to Panama as a beautification plant but has since become an invasive species. "It grows really fast, so it will take the place of pioneering species and prevent the growth of forests or agricultural crops," says Calamaio.

Captivated by the canal grass and the extent of its affect on the area, he decided to return with the program the following summer to research the extent of the species' land coverage using satellite imagery – and more than a little elbow grease.

"This project required a lot more field work. I had to take my machete and work through some of these densely vegetated areas of canal grass to collect GPS points of where it was currently growing to reference back to satellite imagery," he says. "Since the grass can grow to 11 or 12 feet and very close together, it was pretty rough!"

Eventually, however, Calamaio was able to compile a land coverage map showing the extent of the invasion within the Panama Canal Zone, which he then presented to the Smithsonian Tropical Research Institute and the Water Center for the Humid Tropics of Latin America and the Caribbean.

"They thought it was important because they are working on eradication methods using herbicides," he says, explaining that the canal grass cannot simply be cut down due to its complex root system. "Right now it's mainly just around the canal, but the fear is that if it gets out, it will take over sugar cane, which is one of Panama's biggest import-export."

With another summer of GIS experience under his belt, Calamaio decided to spend the next year abroad studying remote sensing and geoinformatics in the Agricultural and Environmental Sciences Department of the University of Rostock in Rostock, Germany.

UAH is unique in its emphasis on incorporating real-world research into its GIS and remote sensing curriculum.

"I certainly could have taken a traditional college path," he says of the decision, "but the level of research experience I got was just as beneficial as finishing a year early." And once in Rostock, he had the chance to work in one of the university's remote sensing labs.

"This particular lab focused on the use of unmanned aerial vehicles for the practice of precision agriculture, also known as satellite farming," says Calamaio, "so I helped with some of the image processing and I got to learn a lot about the autopilot system and the cameras that they use."

Calamaio's skills were further honed upon returning to UAH for his final undergraduate year, where he worked on model aviation research with the Systems Management and Production Center under Dr. Rob. And after graduating in December of 2013, he accepted a fully funded graduate research assistantship with NASA/SERVIR. 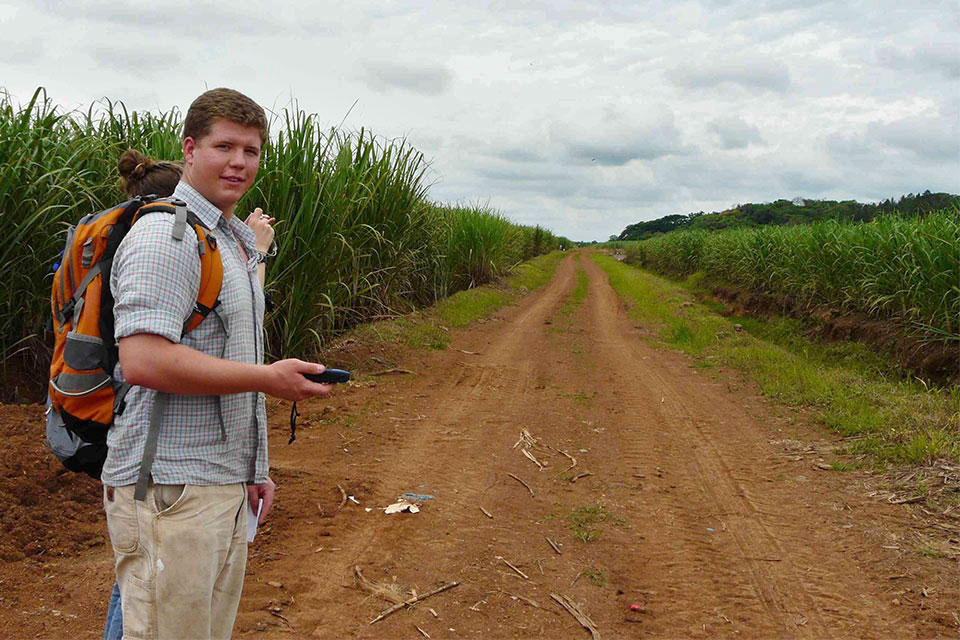 "ISERV is a test-bed camera onboard the ISS, so I help chose targets and coordinate with the MSFC to operate it," he says. "That allows the ISERV camera to provide high-resolution photos to scientific researchers and disaster agencies all over the world."

It was through SERVIR that Calamaio ended up meeting representatives from Guatemala's National Council of Protected Areas (CONAP). "We had guests from all over Central and South America for seminars on GIS and remote sensing," he says, "and so I gave a short presentation on my low-altitude aerial research for UAH and it was really well received."

Soon after, he and Dr. Griffin were invited to visit Guatemala by the CONAP and the Wildlife Conservation Society to demonstrate their system of model aviation as a remote sensing platform.

"We brought our quadcopter, a high-resolution digital camera, and an agriculture camera that captures light in the near-infrared to develop vegetation indices," says Calamaio. That allowed them to demonstrate the autopilot and camera systems to show what the whole process of data collection and post-processing looks like. 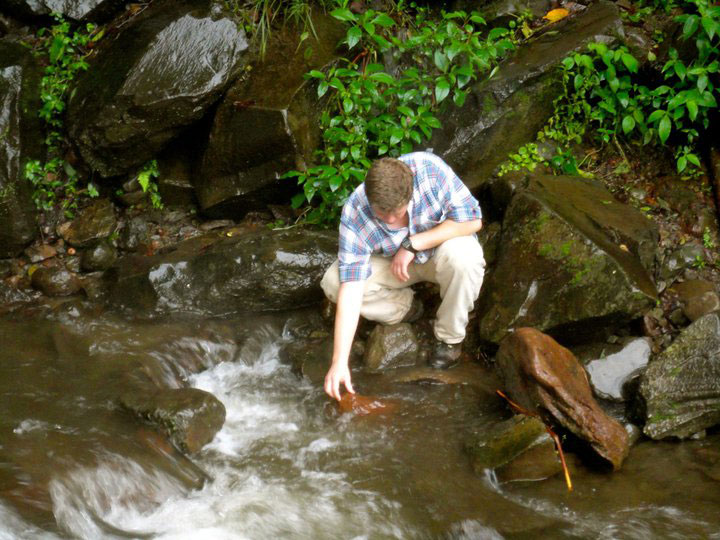 "It was a great research experience – and I got to fly a model helicopter around ancient Mayan ruins!" says Calamaio. That endeavor, he continues, now forms the foundation of his master's thesis. But as much as Calamaio's research is informed by his own, lifelong passions, so too is it a product of being at UAH, a tier-one research university with a mission to ensure an environment where curiosity, discovery, and innovation are valued.

"I don't think I would have had the same college experience elsewhere," he says. "You're starting to see these types of GIS programs around the country, but UAH is unique in its emphasis on incorporating real-world research into its GIS and remote sensing curriculum."

And while he may have preferred to finish his education sooner rather than later, Calamaio says the extra time he spent – particularly traveling abroad – was worth it.

"It seems weird when I see friends who are already finished with grad school, but I feel honored to have been in the position where I can do these things while getting a good education and good experience in the field of environmental science."