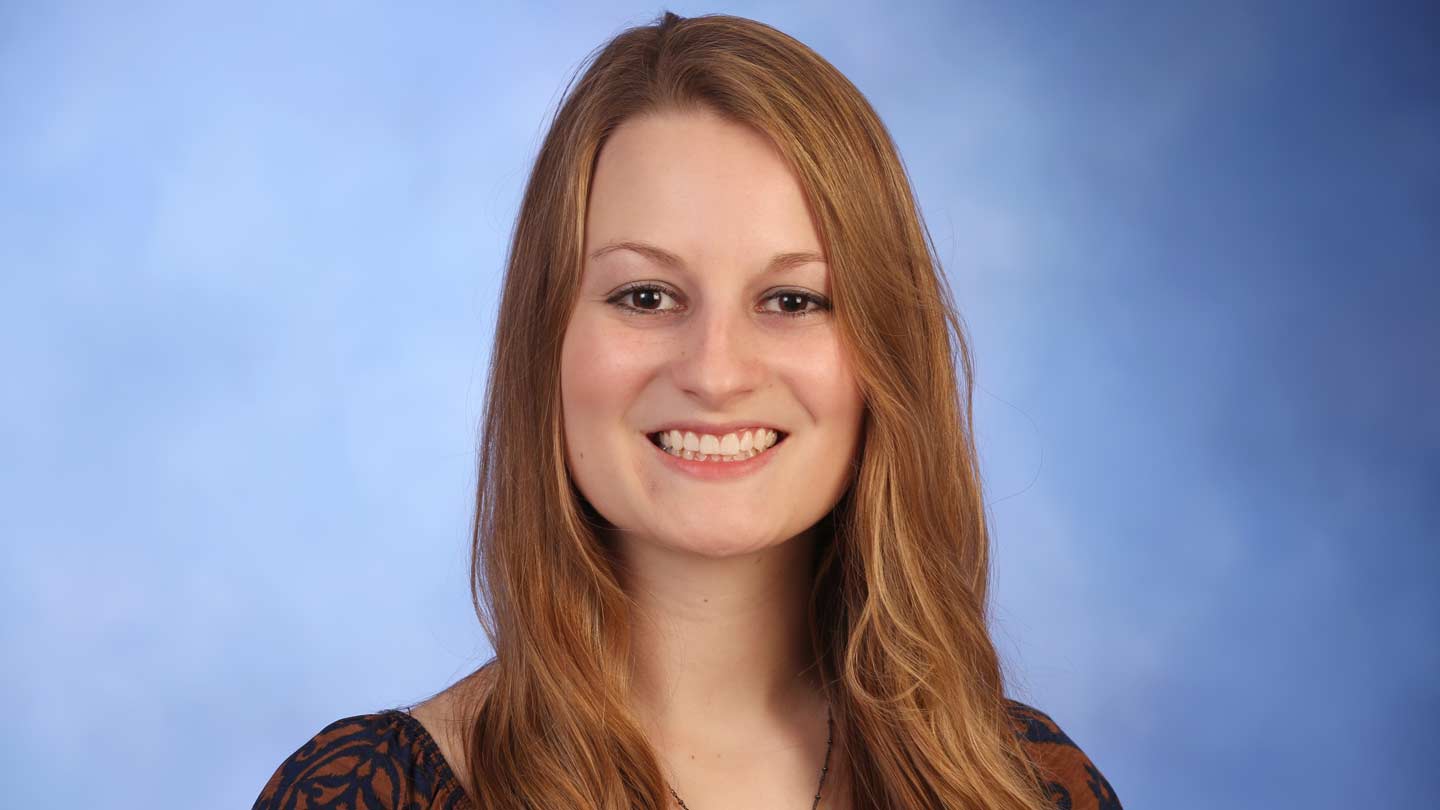 Sophia Smith, a junior biology major, will spend her summer as an intern with St. Jude’s Pediatric Oncology Education Program before attending the College of Pharmacy at the University of Tennessee in the fall.

Grandparents, by their nature, tend to be delighted by the accomplishments of their grandchildren. Now Sophia Smith's grandfather has yet one more reason to be proud. This fall, the biology major at The University of Alabama in Huntsville (UAH) will be attending his alma mater: the College of Pharmacy at the University of Tennessee. "Being a pharmacist has always interested me more than anything else," says Smith.

As a junior, Smith's early acceptance into professional school means that she won't technically graduate from UAH. But while that makes the Lewisburg, Tenn., native "a little bit sad," it was part of her plan all along. "When I came here, I met with Dana right away," she says, referring to Dana Warner, Coordinator of UAH's Pre-Health Professions program. "I knew that was what I wanted to do."

Smith's ultimate goal, however, is not to become a retail pharmacist like her grandfather but rather a clinical research pharmacist. "Since I've been at UAH, I've fallen in love with research," she says, crediting her nascent passion to Dr. Eric Mendenhall, assistant professor of genetics. "I took his genetics class, and afterward, he said to let him know if I was interested in working in his lab. So I said yes!"

She ended up being the first person he hired for his then brand-new Mendenhall Lab - quite an honor for an undergraduate with no previous experience. Still, Dr. Mendenhall had no doubts about his selection. "She was well organized, curious, motivated, and reliable," he says. "Those are all good qualities in a lab setting and what I needed when I started my lab, and she's been that from day one."

I didn’t even think about working in a lab at that time, and now this is what I want to do.

Since then, Smith has been responsible for training those hired after her on basic lab protocols and, last fall, took on her own research project using CRISPR genome engineering technology to build cell lines. She also remains "the person I have do things when I want to have them done quickly and correctly," says Dr. Mendenhall, pointing to a recent collaboration with the Myers Lab at the HudsonAlpha Institute for Technology as an example.

"A really crucial project fell into our laps that had to be done yesterday, and I knew Sophia would be great at it," he says. "We needed probably 20 DNA fragments built in an efficient and rapid manner, and she got everything done and we won the race so to speak. Now we're submitting the paper for publication, and we recently presented it at a Cold Springs Harbor Laboratory scientific meeting."

Sadly for Dr. Mendenhall, however, he'll have to say goodbye to his star researcher sooner rather than later. This summer, Smith will first complete a research internship with St. Jude's Pediatric Oncology Education Program in Memphis, Tenn. One of the most prestigious - and competitive - in the country, the 11-week residency matches students with a faculty mentor who shares their research interests.

Smith decided to apply for it after attending a scientific retreat hosted last winter by HudsonAlpha and featuring a keynote presentation by Dr. Mary Relling, chair of the Department of Pharmaceutical Sciences at St. Jude Children's Research Hospital. "I thought it would be a good opportunity to get my foot into the pharmacogenomics door and see what I can do," she says.

The deadline for the application was February but Smith didn't want to take any chances. She submitted hers in November, and in mid-December, Dr. Relling emailed her personally with the good news that she was accepted. "I was shocked and very excited," she says. "I immediately drove to UAH to tell Dr. Mendenhall." His response? "He said, 'I knew you would get it!' He kept saying that all along," she laughs.

With a May start date, the internship will carry Smith all the way up to the start of pharmacy school, where - schedule permitting - she hopes to continue her research. "I guess I'll see how the first semester goes and how I can handle it," she says. "We joke that you automatically start making Ds when you work in a lab, but I'd almost rather be there than anywhere else."

That's not something Smith could have anticipated when she first arrived at UAH, a school she says she chose for its convenience and reputation rather than the research opportunities that it affords undergraduates. "I didn't even think about working in a lab at that time, and now this is what I want to do," says Smith. "So it's very fortunate I ended up here and in Dr. Mendenhall's lab."