UAH’s Frances C. Roberts to be inducted into the Alabama Women’s Hall of Fame 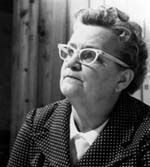 HUNTSVILLE, Ala. (December 17, 2012) — Frances C. Roberts, whose “pioneering spirit” and leadership helped to establish The University of Alabama in Huntsville (UAHuntsville) as one of the top research institutions in the nation, will be inducted into the Alabama Women’s Hall of Fame in March 2013.

“I am delighted for Dr. Roberts to have this richly deserved honor. Her contributions to Huntsville’s history have benefited thousands of people who may not recognize her name today. Inclusion in the Hall of Fame is a fitting tributeto a true pioneer among professional woman in the state of Alabama,” said Dr. Johanna Shields, professor emerita of history at UAHuntsville.

Dr. Roberts, who taught history when the University of Alabama Extension Center began operation in January 1950, was the university’s first full-time faculty member. She established the History Department and later served as chairperson. Roberts also served as director and founder of the university’s Academic Advisement and Information Center.

On May 14, 1988, she was honored with the dedication of Roberts Hall on the UAHuntsville campus. Roberts devoted 29 years of dedicated service to UAHuntsville, and 18 years to the Alabama Public School System.
The Alabama Women’s Hall of Fame was founded in 1970, and is located at Judson College in Marion, Ala.