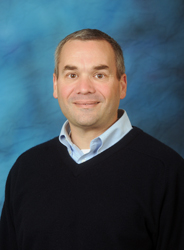 Huntsville, Ala. (March 6, 2012) — Dr. John Kvach, assistant professor of History at The University of Alabama in Huntsville (UAH), has been selected as a city scholar for a National Endowment for the Humanities (NEH) grant project about the Civil War.

To commemorate the 150th anniversary of the Civil War, the Alabama Humanities Foundation has partnered with Birmingham, Huntsville, Mobile and Montgomery Public Libraries to host the “Making Sense of the American Civil War,” reading and discussion series. Each library will host a free, five-part reading and discussion series led by NEH city scholars.

The NEH city scholars program features UAH’s Kvach and a panel of distinguished Alabama historians, including Victoria Ott of Birmingham Southern College; Lonnie Burnett of The University of Mobile; Patience Essah of Auburn University, George Rable of The University of Alabama; and Bob Bradley of the Alabama Department of Archives and History.

Kvach’s presentations will be given at the main branch of the Huntsville Public Library at 7 p.m., on the following Thursday evenings at 7 p.m., March 15 and 29, April 12 and 26, and May 10.