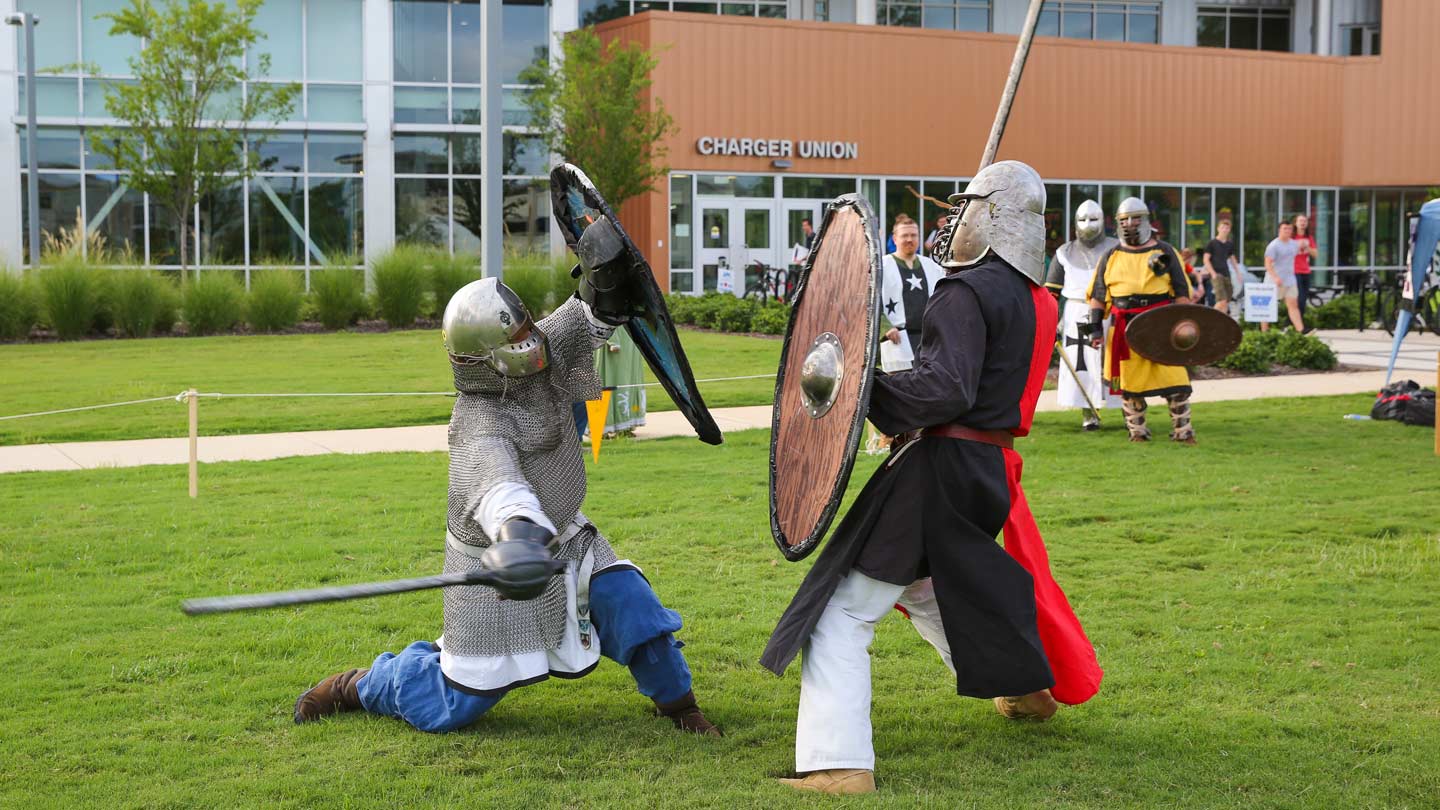 Two members of UAH’s Medieval Combat and Culture Group, a student-run organization dedicated to preserving and portraying the customs and culture of that time period, recreate a battle on the lawn of the Charger Union.

A pair of pre-Renaissance combatants face off in an epic sword battle as a crowd of spectators gathers to watch. But this isn't a scene from a movie. It's actually two student members of the Medieval Combat and Culture Group (MC2G), re-enacting a battle scene from the Middle Ages on the campus of The University of Alabama in Huntsville (UAH).

Founded in 2012, the MC2G is made up of students of all majors who simply enjoy preserving and portraying the customs and culture of that time period, and in particular the battles of the Crusades. That's something that has been a passion for club president Wanda Ellis since childhood. "I've always been interested in the history of the medieval time period," says the Madison, Ala., native.

It gives me an opportunity to immerse myself in activities and an environment that promotes the study and recreation of pre-17th century.

Ellis was initially introduced to the era by her parents, who are active in the Society for Creative Anachronism (SCA). Founded in 1968, the SCA is a worldwide educational non-profit organization devoted to researching and re-creating various aspects of life as the landed nobility of pre-17th-century Europe. Members dress in clothing styles worn during the Middle Ages and Renaissance, take part in classes and workshops, and attend events that include tournaments, royal courts, feasts, and dancing.

"They involved me with the SCA for about ten years growing up," she says. "We would do full live events where you go away and basically live in the Middle Ages, wearing clothes that are period correct and having fight tournaments." Each region within the SCA is ruled by a king and queen, selected by tournament combat. Those kingdoms then publish their own newsletters, keeping local members informed about activities within the region and setting the standards for safety, which can be found in their bylaws and corporate policies.

After taking a break from the SCA during high school, Ellis decided to join the MC2G when she came to UAH. "I missed the camaraderie," she says, "and it gives me an opportunity to immerse myself in activities and an environment that promote the study and recreation of pre-17th century." For example, group members make their own suits of armor according to SCA regulations that ensure they are safe for combat recreations. "I did have a set of armor and would go out and fight some days," she says, but after going through a few fierce battles, she's had to take it apart to work on it. 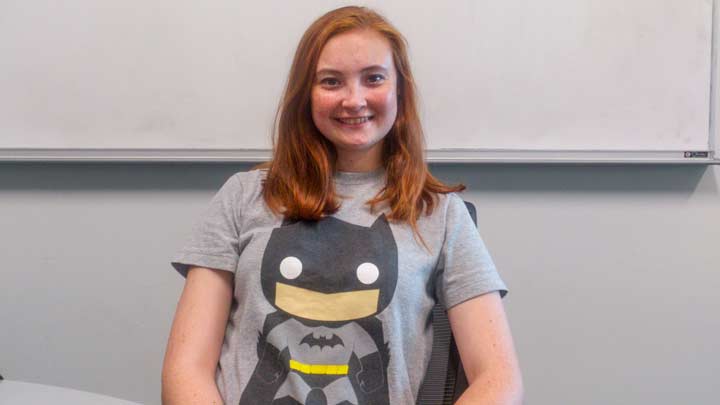 Wanda Ellis is the president of UAH's Medieval Combat and Culture Group.

Now she's finding that there are other benefits to her involvement, and in particular since taking over the presidency. "Being president of the club allows me to make new friends," says Ellis. It also challenges her to go outside of her comfort zone when it comes to promoting club events. "I'm obligated to talk to people and hand out fliers on practice days and let them know about any of our activities that might interest them."

But most important of all, Ellis believes MC2G has taught her how to be a better leader - a skill that will serve her long after graduation day. "It has shown me how I need to behave when I'm in a leadership position in the workplace," she says. "I'm learning to know when to do things myself and when to delegate." Case in point? She often relies on her officers on to help with planning and advertising the club's events, which include regular club meetings and socials every fifth Tuesday that feature period-specific food, dancing, and bard's music played on traditional instruments like the shawm.

When she's not focused on MC2G activities, Ellis is busy working toward her undergraduate degree in mechanical engineering and physics - two subjects that are also longtime passions. "I've always had a preference for the sciences," she says. "I like experiments and understanding the cause and effect of how things work." Whether or not her professional career will leave her time to continue "visiting" the Middle Ages remains to be seen, of course. But for now it's more than worth the effort. "I'm working a lot of hours and I'm really busy," she says with a smile, "but I got this!"