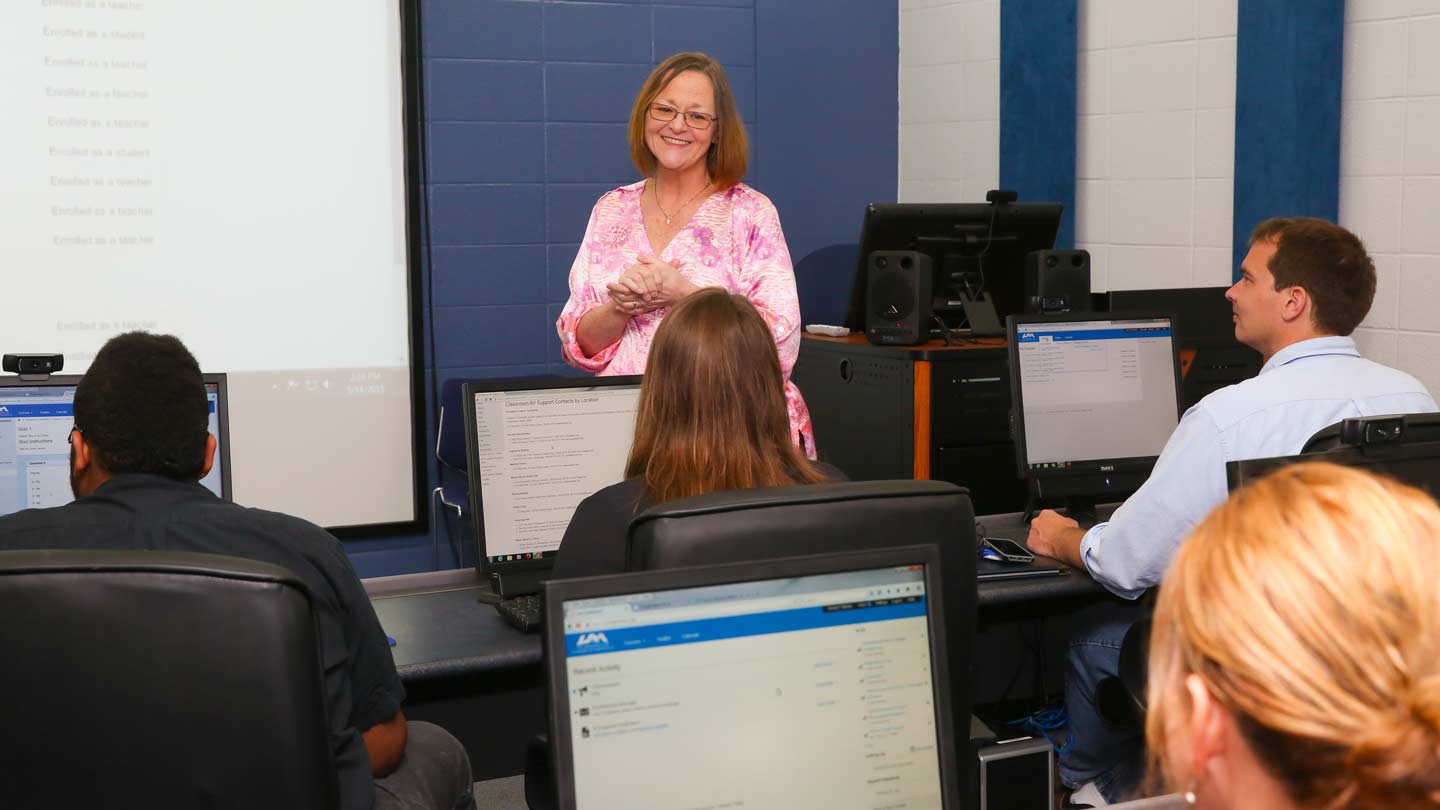 Jan Perkins, an administrator and instructor in Academic Technologies will retire from UAH at the end of May after 35 years of service.

Lately, Jan Perkins hums the John Denver song, Leaving on a Jet Plane, a lot. Actually, Perkins has trimmed the 60s tune down to one word: Leaving.

"Only I'm not leaving on a jet plane, I'm taking it to the house," she said. Perkins will retire from The University of Alabama in Huntsville (UAH) at the end of May after more than 35 years of continuous service.

Perkins started full time employment at the university in 1980 as a Transcript Clerk. "I worked in the student records office while attending UAH, so it was like coming back home."

Perkins' first supervisors were Mildred Vess and Nan Hall, gatekeepers of the university's Admissions and Records Department. "They were great bosses … they taught you how to fix your mistakes, and not to be afraid of making mistakes. Nan always said, 'people who don't make mistakes aren't doing anything'."

In 1983, Perkins began working in the Admissions Office. "I started with undergraduate admission processing and then we rolled graduate processing in with it a few years later. We used an adding machine that was so large that the desk would shake when you were punching in your numbers," she said. Perkins said the office always "ran" two tapes to be sure the units, as well as the average, figured correctly.

Hard files were used to track all documents needed in the admissions process. Transfer credits were evaluated and typed twice, one copy mailed to students and the other copy placed on a permanent record card. "It was a painstaking process that was hard on the students as well as the support staff," Perkins said.

"We had just moved up to online processing at the time of registration in the early 80s, but students still had to stand in line to complete everything," she explained. Perkins said there were many times the online system slowed to a crawl, but it was much better than pulling punch cards. "It was a huge accomplishment when the students had their schedule in their hand when they left registration."

It's hard for Perkins to tamp down her excitement for computer programs in Enrollment Services that have moved the department forward in leaps and bounds to a very robust system that provides quicker and more accurate information to both the student and the advisors. "In my opinion, the improvements provide the students with stronger and quicker information to be successful."

In 2007, "the ride of a lifetime began" when Perkins moved to UAH's Academic Technology Department as a User Support Technician. Her "number one responsibility" is to support faculty in the use of learning management systems. The current university program is Canvas and the previous system was Angel. "I have been involved in selecting both Angel and now Canvas. We integrate many additional technologies in Canvas. As with any new product, there is a learning curve that is steep and hard but I'm sure we have been through the worst part."

In her three decades of service to the university, Perkins has witnessed first-hand some very funny incidents involving faculty, staff and students. One of Perkins' favorite stories involves a female staff member in the admissions area who chased a crafty student after he created a diversion and stole his official credentials off the staffers' desk. "Little did the student know that the female staffer grew up with brothers. Let's just say she used some football retrieval skills to get the paperwork back."

Perkins said the most rewarding part of her job as a "teacher" is to make something easy for someone to learn and to see them embrace the technology. She offers this bit of advice for her successor: patience and more patience. "People want the information and they want to learn it at their pace. Know your product and never be afraid of saying 'I don't know but will find out and get back to you.'"

Perkins said she feels good leaving, knowing that two staff members Christy Stanley and Mary McManus, are familiar with the Academic Technologies Department and the Canvas program. "Christy and Mary already have this stuff hands down. It makes leaving my faculty much easier."

"After 35 years of working, I'm looking forward to spending time on the land that my father, and grandfather had," Perkins said. "We have about 36 acres, a mini horse, a donkey, a barn cat and a bunch of dogs. I want to increase the animals to include some goats, some chickens and a few cows. My daughter, Elizabeth, will graduate with a Physician Assistant masters degree at the end of August and my husband, Wesley, and I are looking forward to going to her graduation and seeing her get a real job!"

Her retirement plans include perfecting some low-carb and low-sugar dishes. "I worked hard to lose about 180 pounds in recent years, so I want to keep it off and maybe lose another 20 pounds," she said.

When asked how she would like to be remembered Perkins said, "I feel like I have UAH in my blood. I've either been in school here or worked here since 1971. I'd like to think I have left things a little better and that I was dependable and kind."