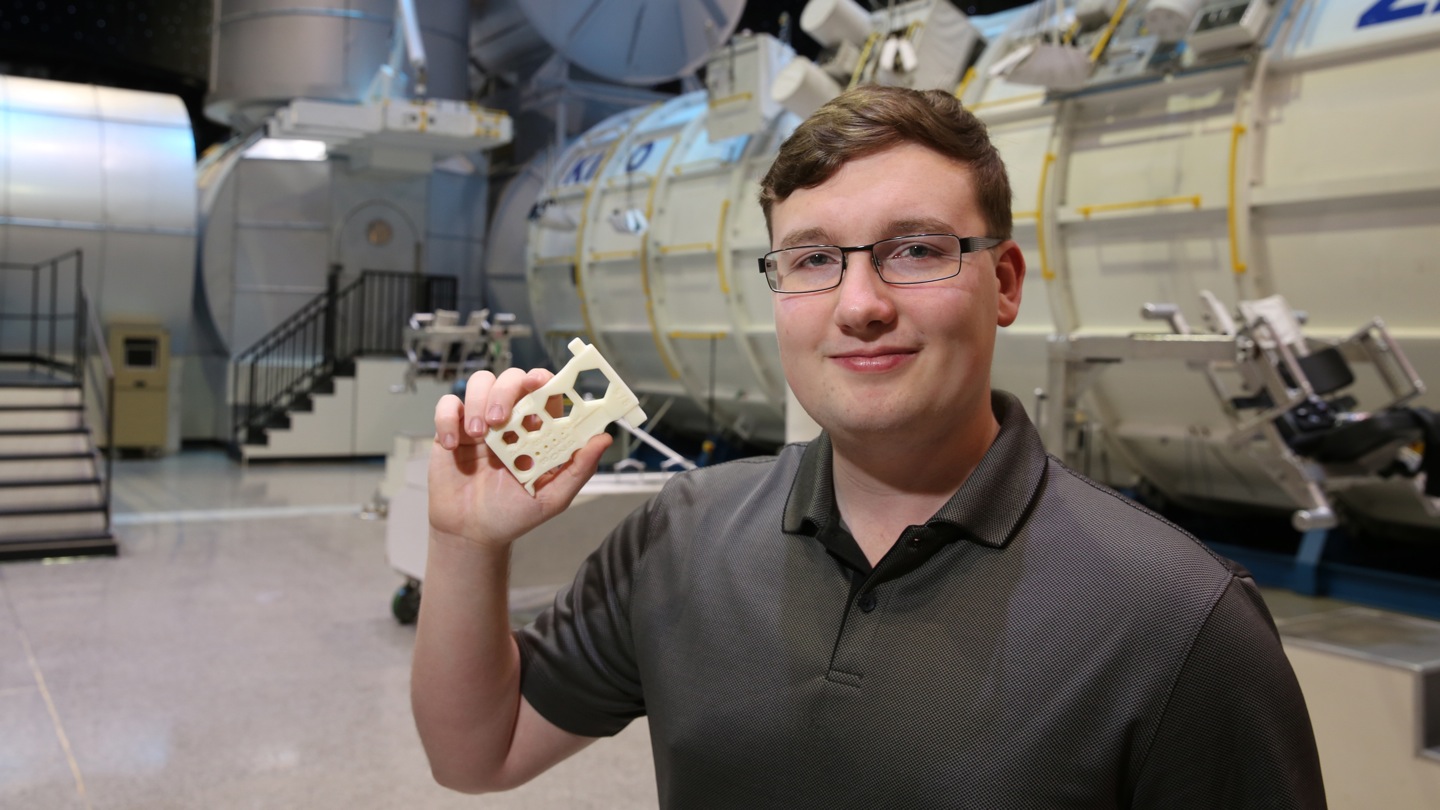 At first glance, the web ad that popped up on Robert Hillan's browser looked like a scam. "It said something like, 'Get your design in space!', which made me think it was fraudulent," says the sophomore aerospace engineering major at The University of Alabama in Huntsville (UAH). "But I clicked on it, and it was legitimate."

In fact, it was the Future Engineers Space Tool Challenge, which tasks K-12 students with using 3-D modeling software to create a design that can be 3-D printed aboard the International Space Station (ISS). By the time Hillan learned about it, however, there were only five days left to enter. "I had never even used modeling software before, so I almost didn't do it," says the native of Oberammergau, Germany. "But I kept coming back to the idea of a tool like a wrench that would have a lot of uses."

It took him almost a day to sketch the design by hand. "I wanted to see how many tools I could squeeze into one little rectangle - I didn't want to overwhelm anyone, but I wanted it to have a lot of uses," says Hillan. He ended up including four closed-head wrenches, two drives for sockets, a pry bar, an ergonomic grip, a single-edged wire stripper, a ruler, a slot for Velcro, and a clip for a carabiner. 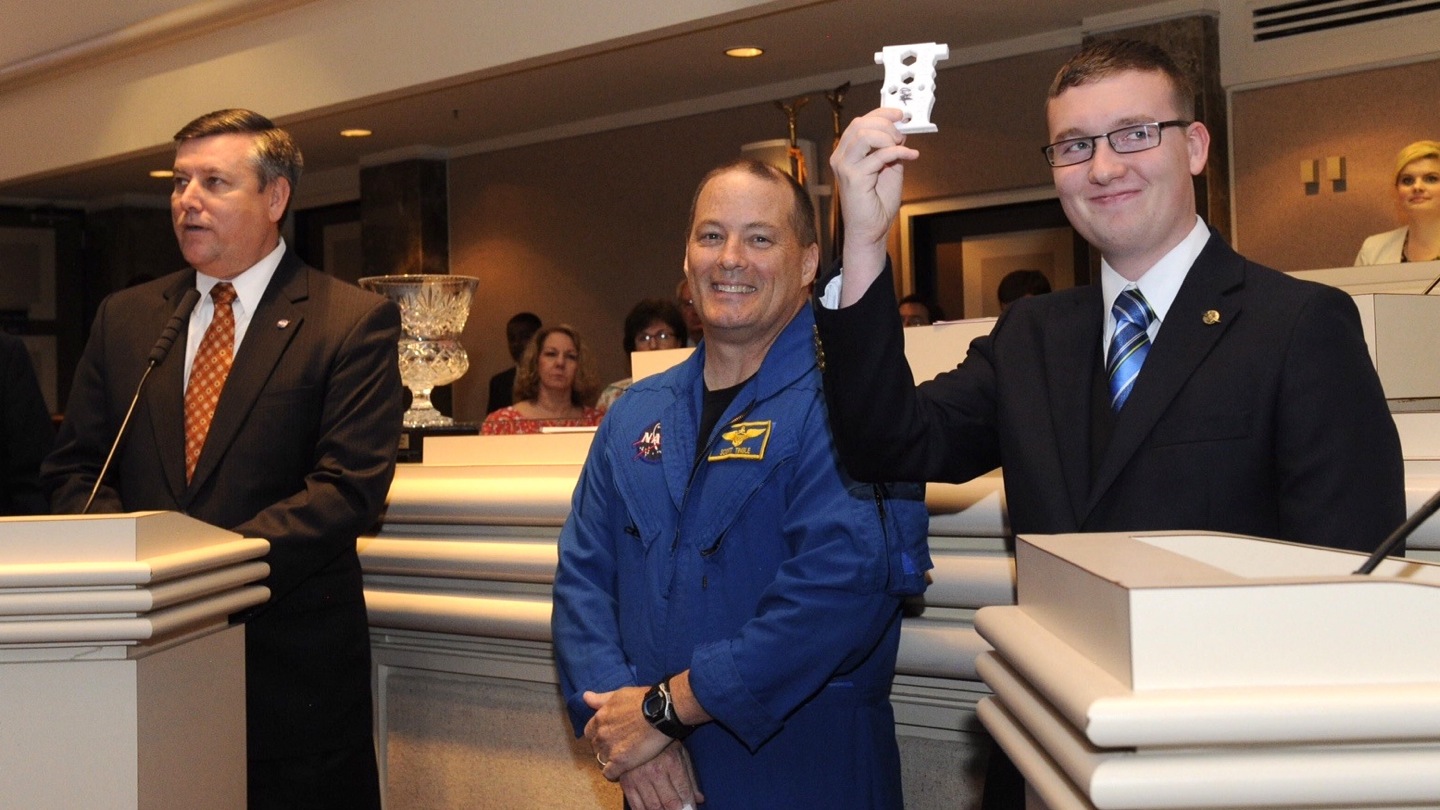 He then spent the following three days teaching himself how to use the software to design his Multipurpose Precision Maintenance Tool (MPMT) before submitting it within 24 hours of the deadline. "The first thing I thought was, good enough!" he says. "But I also thought about how, if I had found the competition when it first opened, I might have come up with something better. So who knows?" What he did know was that he had a slight advantage over his competitors. "I felt like I had a better understanding of the space environment," says the long-time space enthusiast and seven-time Space Camp attendee.

For example, knowing safety would be a priority, he gave the tool rounded edges and eliminated any moving parts to prevent pieces from snapping off. "And because two astronauts would be judging the finalists, I named it the MPMT since NASA has an acronym for everything," he laughs. Still, it came as a surprise when, a few weeks later, Hillan learned he'd won. "I was on my phone just constantly refreshing the site," he says. "I was like, I'm not in the bottom two. I'm not second. I'm first!"

His victory was soon followed by an invitation from competition co-sponsor NASA to attend the NASA Alabama Aerospace Day in Montgomery, Ala. There he was joined by Marshall Space Flight Center (MSFC) Director Patrick Scheuermann and astronaut Scott Tingle, who is expected to serve aboard the ISS in 2017. "That was pretty awesome," says Hillan. "I also got to meet the Governor and the Lieutenant Governor, and lead the Pledge of Allegiance on the floor of the Alabama Legislature." 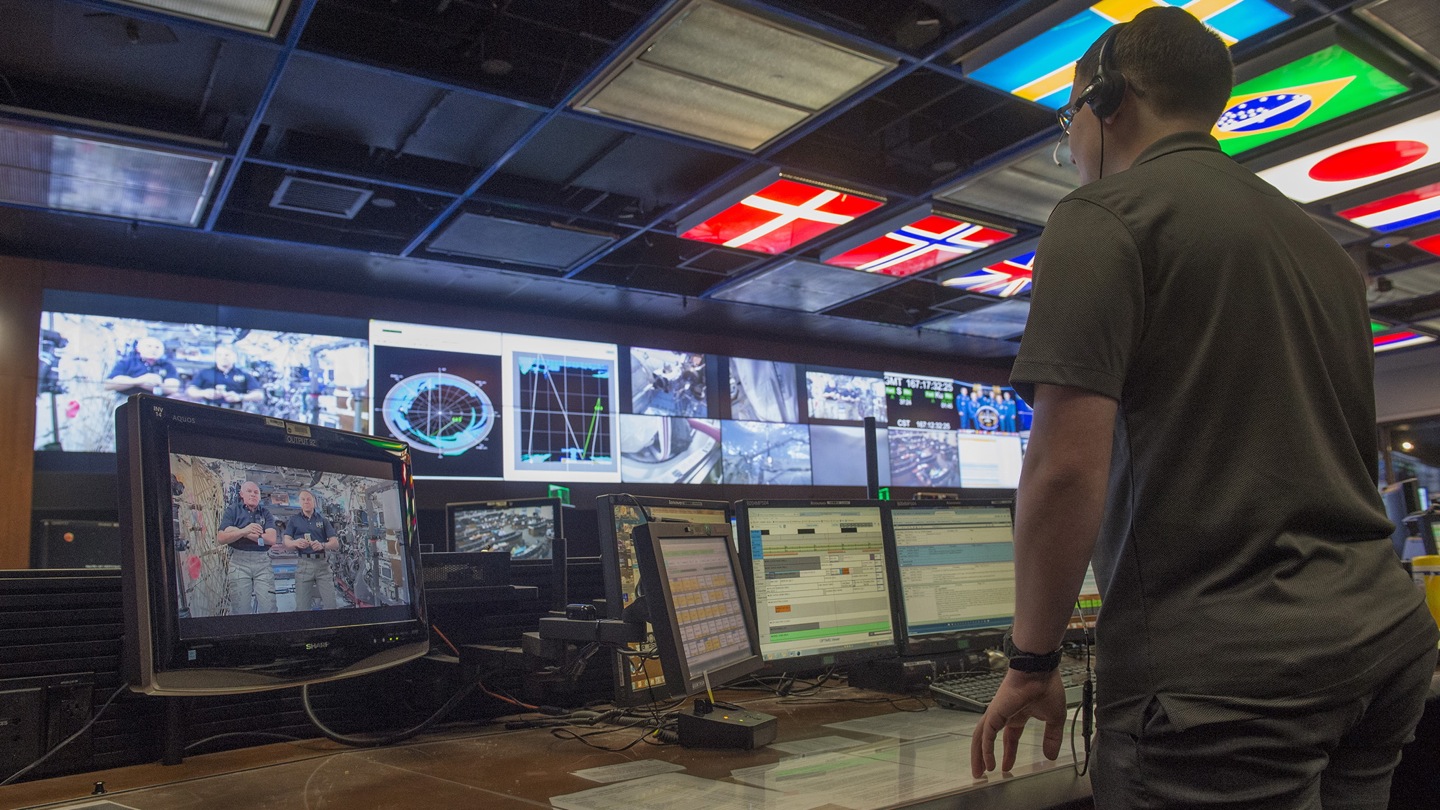 Hillan spoke with NASA astronauts aboard the ISS after they printed his Multipurpose Precision Maintenance Tool in space.

But nothing could compare to the day Hillan was invited to sit in MSFC's Payload Operations Integration Center and speak with the ISS crewmembers - Commander Tim Kopra and Flight Engineer Jeff Williams - who had 3-D printed his tool. "I got the bragging rights for winning the very first of these competitions, but that was the most epic prize," he says. "It was one of the first times, if not the first time, a regular person has gotten to speak with astronauts one on one."

He was also thrilled at his tool's reception. "They said they were really impressed! They thought it was cool and that it could have big advantages for deep space exploration." Nevertheless, Hillan hopes they won't ever have a need for the MPMT. "I don't want the crew to use my design unless it's an absolute emergency - it could snap!" he says. "But I am glad that, if there is an emergency, they don't have to rely on pre-made things. They can 3-D print what they need."

With the competition now over, Hillan is focused on completing his undergraduate degree. And given his interest in space, he's confident he made the right choice to come to UAH. "It was the first school I applied to," he says. "It's right next to the U.S. Space & Rocket Center and NASA MSFC, and it has the Propulsion Research Center." Though after his success in the Future Engineers competition, he's refined his career focus somewhat. "I want to become an entrepreneur and start my own business," he says. "I need to make enough money to finance the research and development of my current and future concepts."