UAH graduate pays forward assistance he received as a student 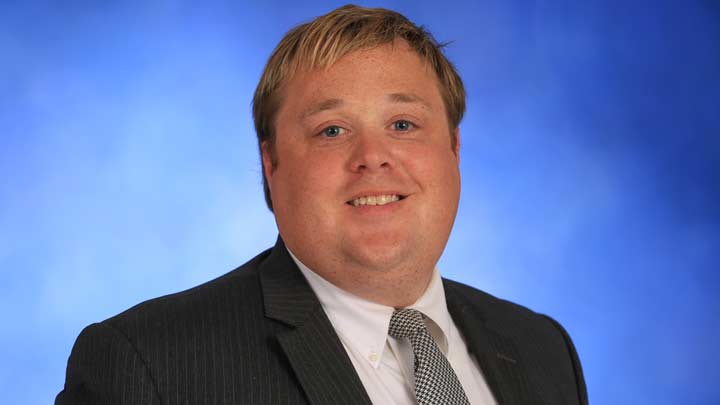 UAH alumnus Derek Greer serves as a one of seven disability resource coordinators in the state of Alabama.

Derek Greer knew that the middle of Holmes Avenue was not a safe place for pedestrians. But between the setting sun and encroaching darkness, his visual disability was preventing him from finding his way across. Suddenly, two strangers approached and helped him to the other side. It was a moment he wouldn't forget, even long after he graduated from The University of Alabama in Huntsville (UAH) with a degree in sociology.

Today, Greer is helping people in much the same way. He serves as a disability resource coordinator for the state of Alabama, helping individuals with disabilities obtain training, education, and employment. His office is located in the Hanceville Career Center, but he spends much of his time on the road, visiting clients in the four counties under his purview: Cullman, Blount, Morgan, and parts of Marshall. "It's a very big job," he says.

The position of disability resource coordinator is, in fact, a new one for the state. Seven were hired this year as part of the Disability Employment Initiative (DEI), a joint effort of the Department of Labor's Employment and Training Administration and Office of Disability Employment Policy. The initiative brings together local, state, and federal resources to improve opportunities and outcomes for those with disabilities who are unemployed, underemployed, and/or receiving social security disability benefits.

"The idea is for me to be Google, so that if someone has a problem, it's my job to solve it!" says Greer. "I consolidate a lot of different services so the client doesn't have to go from point to point to point. The result is individualized customer service from start to finish." That can mean arranging transportation to and from a place of employment, locating affordable housing or healthcare, finding funds for food or medical supplies – and the list goes on.

Some of it is unfamiliar to Greer, who previously worked as a certified diamontologist. But not all of it. "The program is very similar to the process I had gone through while I was at UAH, so I was aware of how important it is," he says. "Had it not been for the assistance I received at UAH, the Alabama Institute for Deaf and Blind, and the Vocational Rehabilitation Service, I don't think I would have been able to graduate."

It was Greer's advisor, UAH sociology professor Dr. Mitch Berbrier, who initially suggested he visit the university's on-campus Disability Support Services (DSS) Office . "I had no idea where to go or what programs were available to help me – all I knew is my grades were slipping and I was having trouble keeping up with higher-level courses," he says. "Mitch recommended a disability coordinator."

Had it not been for the assistance I received at UAH, the Alabama Institute for Deaf and Blind, and the Vocational Rehabilitation Service, I don't think I would have been able to graduate.

The DSS Office, in turn, put him in touch with the Alabama Institute for Deaf and Blind, and the Vocational Rehabilitation Service, and together the three provided the services Greer needed to get back on track. "Mitch made a difference in my life," he says. "He's just a really good guy with a heart to help students at UAH. Had it not been for his dedication to my personal success, I wouldn't be where I am."

And he wasn't the only one. David Harwell, director of UAH Theatre, also played "an important role," approaching Greer one day after theater appreciation class and encouraging him to perform. "It broke me out of my shell when it came to speaking to people," says Greer, who went on to star in Red Scare on Sunset, Rantoul and Die, and Where the Great Ones Run. "I loved it!"

Needless to say, he has little time for acting nowadays between his busy job and a growing family. But he still uses the skills he picked up while on stage and in class at UAH. "I learned amazing communication techniques through the Communication Arts Department and the Theatre program," he says. "It opened my eyes to being able to see what people were saying when they weren't speaking, and it's given me the ability to begin to read people."

That's key in a position that requires strong interpersonal skills. Yet Greer brings something more to the table, something many of his colleagues do not: the deep empathy that comes from walking in another's shoes. "I was on social security disability benefits because of physical limitations," he says. "I've been able to break free and gain a substantial increase in income on my own terms by working. It provides a great sense of accomplishment and success."

Now that sense of accomplishment and success is what he wants for all of his clients. And he's not going to give up until he helps them achieve it, the same way others – from his supportive professors to kindly strangers helping across an busy road – didn't give up on him.  "Their impact influenced me to do what I do and help other people," says Greer, "and I want to pay it forward."