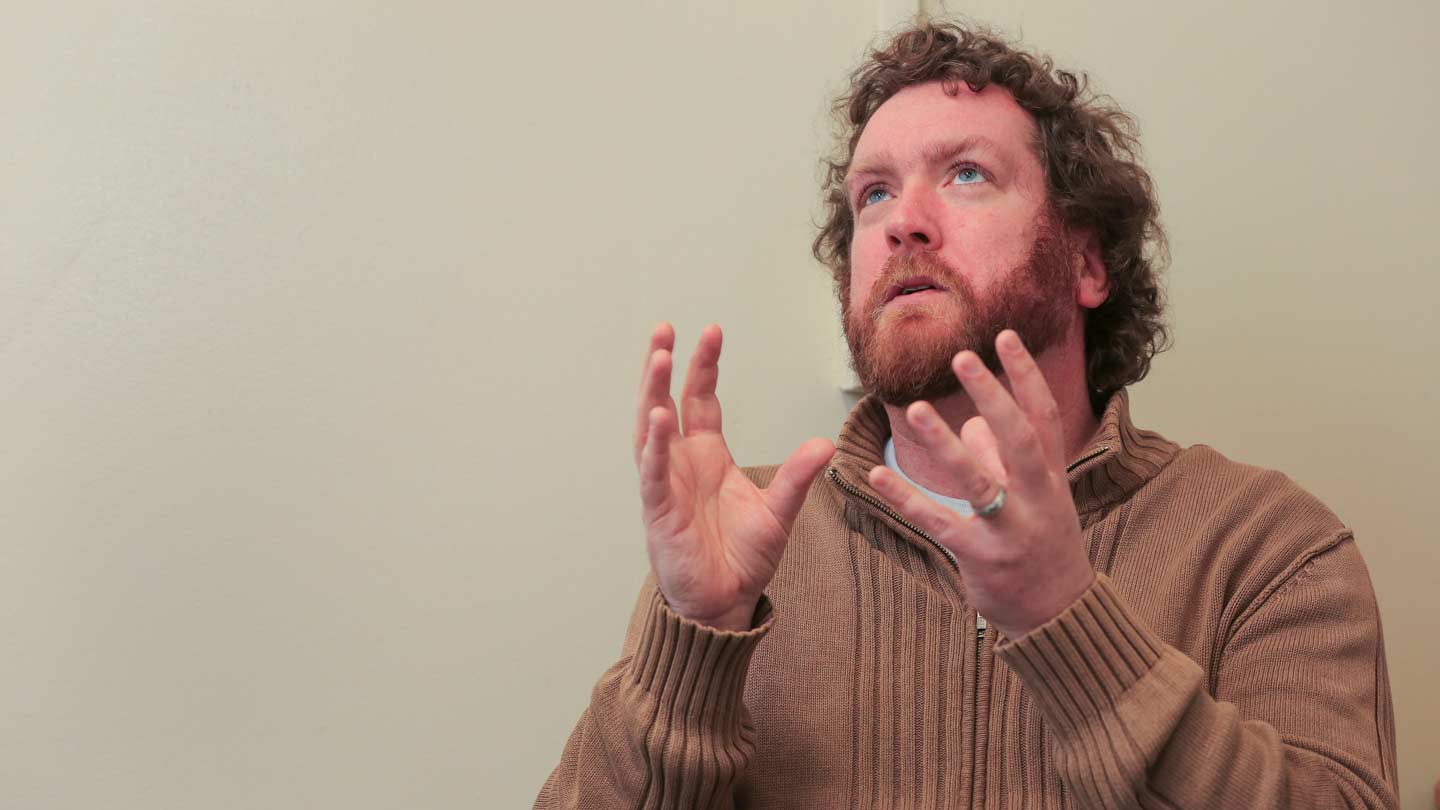 Dr. Joe Conway’s latest research project flies in the face of his past work by migrating toward bird mimicry in literature.

When Dr. Joe Conway submitted a paper about talking birds to a captivity narrative conference on a lark five years ago, he never expected that his work would wind up in "Mocking Bird Technologies: The Poetics of Parroting, Mimicry, and Other Starling Tropes," a collection of essays published by Fordham University Press that considers bird mimicry in literature. "This paper didn’t fit in with my other research," he says. "So when I heard about this collection, it seemed like the place to put it."

After receiving his doctorate in American literature in 2008, Dr. Conway’s career took flight at The University of Alabama in Huntsville in 2011 when he joined the Department of English as an assistant professor. "My focus is mainly 19th century American literature, which has introduced me to different aspects about Edgar Allan Poe that might not be the most well-known," he says. That interest, in turn, served as the inspiration for his chapter entitled "Words Are for the Birds: ‘Non-Reasoning Creatures Capable of Speech’ in the Writings of Schreber and Poe."

There’s recognition of the self in the animal, and then the rejection of that recognition.

"Poe’s interest in talking birds like ravens and parrots stems from their being what he called ‘non-reasoning creatures capable of speech,’ and there’s something unsettling about their relation to language use as a result," he says. In addition to Poe, Dr. Conway was also intrigued by Daniel Paul Schreber, a 19th century German judge who was a voracious reader of Romantic literature like Poe. Schreber, who was diagnosed with what we would now call schizophrenia, believed that birds sent from God spoke to him while he was interned in a German asylum. "The birds would never leave him alone, but nothing that they said was original," Dr. Conway explains. He finds that the most disconcerting aspect of the torture for Schreber was the unoriginal nature of the birds’ statements. Schreber’s birds are only capable of repeating what they have heard, which Dr. Conway sees as a kind of linguistic colonization. "His abuse by second-hand language offers up a terrifying image of the modern individual, who is bombarded by newspapers, regurgitated opinion, and ideology – or today’s social media consumer bombarded by shares and retweets."

One of the similarities between the two writers stems from their thoughts about the way that language impacts the listener. The words that emit from both Poe and Schreber’s beaked orators have effects beyond the auditory. Schreber, for example, "said the birds would inject the words into his nerves like poison," says Dr. Conway. Similarly, Poe’s narrator in "The Raven" states that the bird’s words were like a beak in his heart. "They are both dealing with a lot of the same issues," he says. "They’re both interested in how language and sound are not simply mental experiences but bodily ones as well." 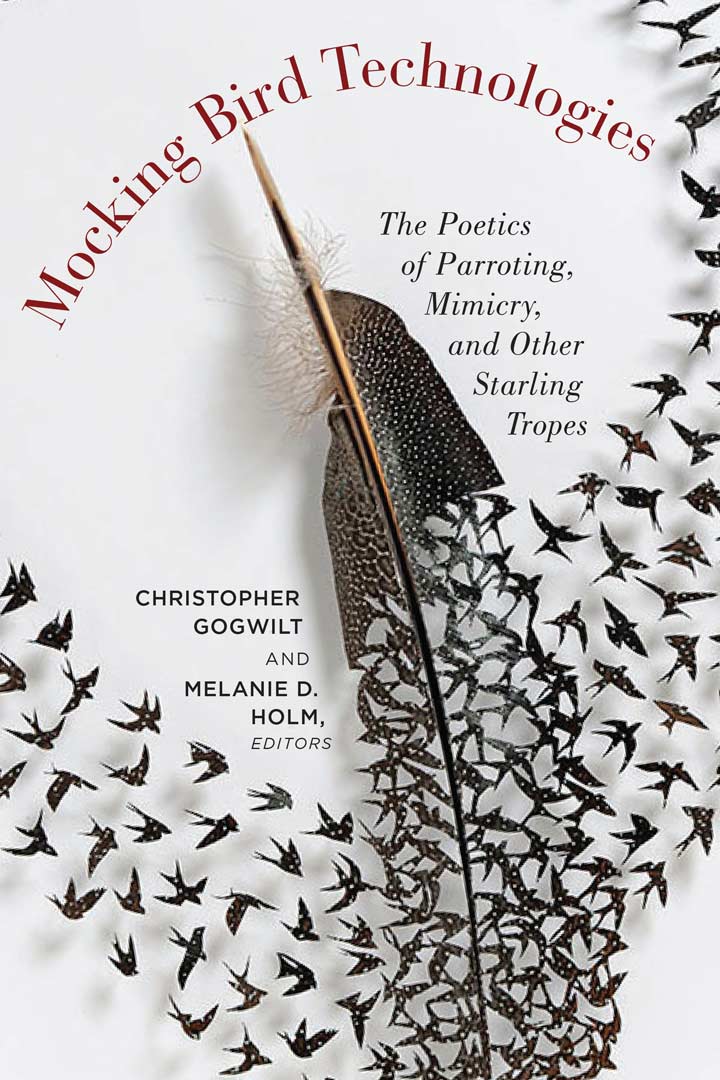 Dr. Conway’s essay, “Words Are for the Birds: ‘Non-Reasoning Creatures Capable of Speech’ in the Writings of Schreber and Poe,” appears in “Mocking Bird Technologies,” edited by Christopher GoGwilt and Melanie D. Holm and published by Fordham University Press.

Both Poe and Schreber also saw birds as being capable of revealing the flaws in our assumptions about the primacy of humans over animals. "The experience of hearing a bird talk is uncanny in that this animal has an ability that is supposed to be special to me as a person," says Dr. Conway. "This makes us think about what else there is apart from language that makes us human." While we may acknowledge that there are animals with the ability to speak, we nevertheless continue to separate man and beast. "There’s recognition of the self in the animal, and then the rejection of that recognition," Dr. Conway explains. "We have sort of a reflexive desire to draw a hard line between us. But then there’s that darn raven on the bust of Pallas. And it won’t stop mocking us."

Dr. Conway finds that the most important element in Schreber and Poe’s work is their use of sound. "Sound is often the thing that gets thrown away when we talk about literature, because we want to get at the meaning of a poem or story. But what does sound contribute to the experience of being human or not human?" he asks. "It’s this overlooked aspect of language." When birds in these works speak, their words are just sound devoid of intended meaning. "In his literary criticism, Poe writes that poems needn’t be about anything really, so long as they are sonorous," he says. Poe’s raven uses the word "nevermore" because, according to Poe, the long "o" sound accompanied by the "r" sound makes for the most resonant sound combination. "For Poe, a poet is one who works with sound rather than language," says Dr. Conway. "So when you have birds that also produce sounds rather than language, they are eerily similar to the poet."

"Mocking Bird Technologies" may be a serious collection of non-fiction, but that doesn’t stop Dr. Conway’s chapter from being a nest of puns. "In this essay I kind of celebrate punning, which is a way of opening up language," he says. He isn’t putting all his eggs in one literary basket, though. Dr. Conway’s upcoming book, with a working title of "Doggone Money," examines how the portrayal in literature of the numerous currencies used in pre-Civil-War America was representative of the socio-economic fragmentation in that period. In the meantime, he will continue to take English majors and aspiring Poe scholars under his wing.