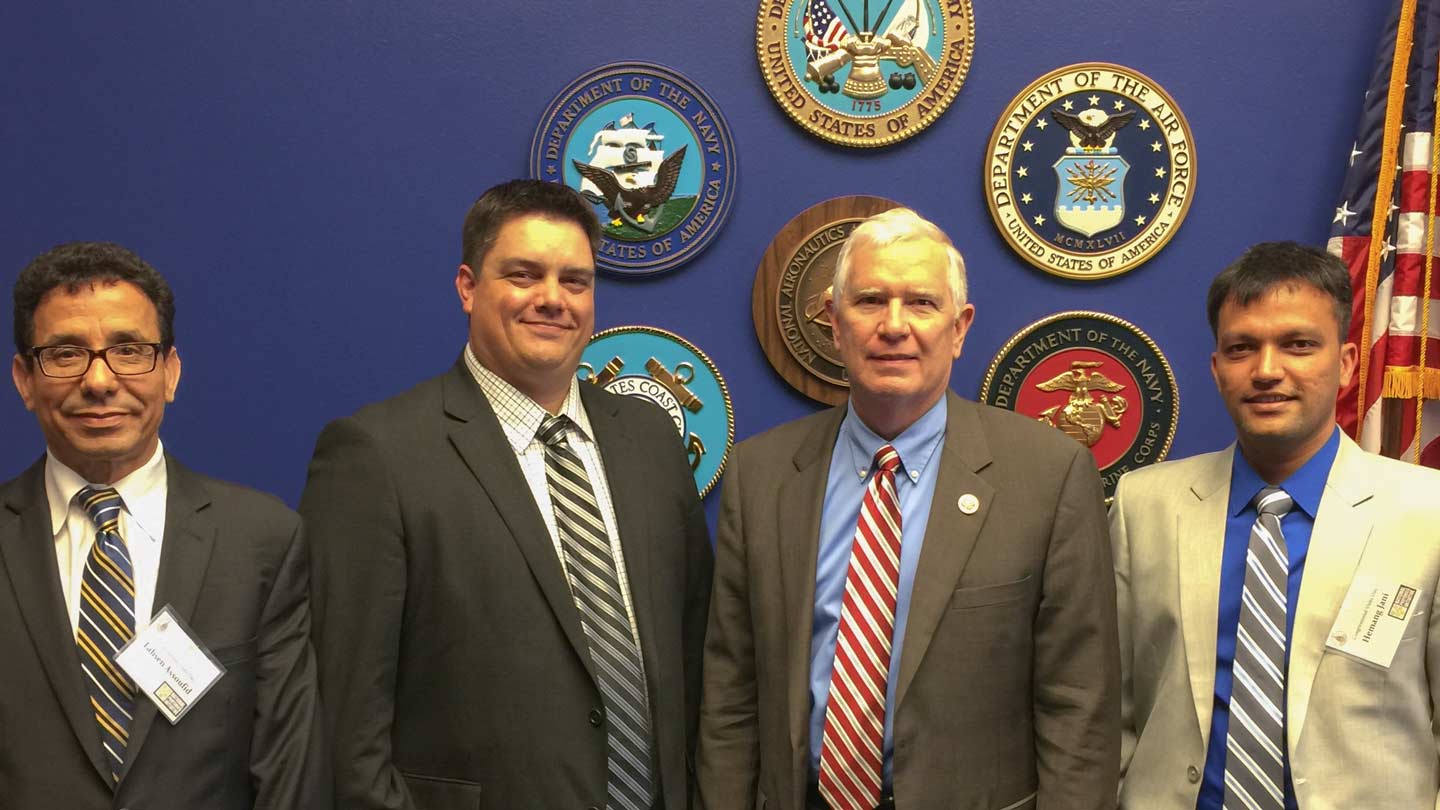 A doctoral student in photonics at The University of Alabama in Huntsville (UAH) was on a team that recently met with U.S. Rep. Mo Brooks of Alabama's 5th Congressional District and Congressional staffers in other offices in support of photonics and science research.

Hemang Jani, a doctoral student of Dr. Lingze Duan in Optical Science and Engineering in the Precision Ultrafast Light Sciences (PULS) group in the Department of Physics, was sponsored by the National Photonics Initiative (NPI) for the Congressional Visits Day (CVD) STEM on the Hill trip to Washington, D.C.

"This is a unique opportunity to start building a relationship with Congressional offices and to inform them of the important optics and photonics work happening in their districts, while at the same time advocating for science. NPI has been doing this for the past couple of years," says Jani, who is from Vadodara, India, and has been at UAH since fall 2011 as an International Student.

"Some of the staffers of these Congressional offices may not have a science background," says Jani, whose research is in ultrafast nanophotonics. "So it is little challenging and exciting to translate our complex science into simple language in a way that we can connect with them. On the other hand, some of our appointments were with staffers having a Ph.D. in physics and chemistry. Events like CVD certainly teach you how to have an effective Congressional meeting."

He says he is encouraged by the support for science in the federal government.

"What I gather is that pursuing a career in public policy, for a scientist, is a good way to consolidate the presence of science, technology, engineering and mathematics (STEM) on the Hill," he says.

Jani was in Washington for two days, the first of which was spent in orientation and briefing sessions at the headquarters of The Optical Society (OSA). The day was capped with a reception in the Kennedy Senate Caucus Room in Russell Senate Office building at which the different science and engineering societies participating in CVD mingled. Congressional visits happened on the second day, with different groups from different states delivering NPI requests to Congress and its representatives.

"To participate in CVD is a volunteer effort to help educate the members of Congress about photonics," Jani says. "Normally, there are a very limited number of student travel grants available that students can apply for."

To be eligible, the applicant must be a graduate student in the area of optics and photonics at an accredited university and be an OSA or SPIE member in good standing. Grants are provided based on responses to essay questions and geographic region.

"I really wanted to volunteer for this event, and based on my essay responses I was selected for the travel grant to attend this event," Jani says. "I would like to thank my adviser, Dr. Duan, for his discussions regarding talking points for CVD and his encouragement. I would also like to thank Dr. Tommy Cantey from Huntsville Electro-Optical Society (HEOS), who has been a past NPI CVD participant, for his useful tips and discussion for CVD."

NPI was formed by five organizations: The Optical Society (OSA); the International Society for Optics and Photonics (SPIE), the Institute of Electrical and Electronic Engineers (IEEE) Photonics Society (IPS), The Laser Institute of America and the American Physical Society (APS) Division of Laser Science.