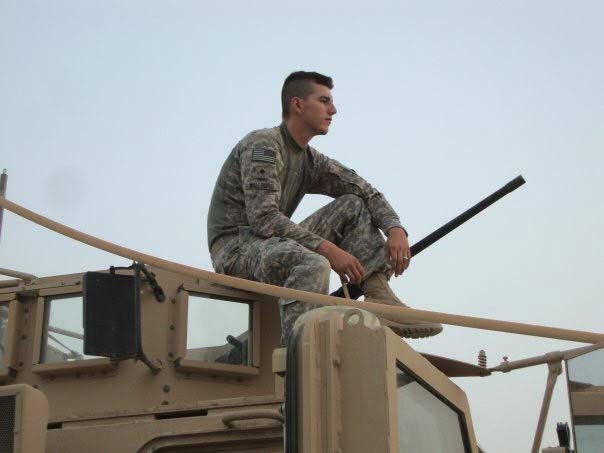 What a difference a decade makes.

Wallburg didn’t enroll in the UAH College of Engineering in 2003 expecting to drop out, but as the saying goes "stuff happens." And, a lot of stuff happened during Wallburg’s first attempt at graduating from UAH.

"I had two very different experiences at UAH. When I first attended from 2003-2006, I had the opportunity to have a great time in the student atmosphere. I had such a great time that my studies suffered heavily," Wallburg said. "This was no fault of the university. The taste of true independence was initially difficult for me to reign in. Every time I tried to get it together, the effort was short lived and my directionless wandering would take over again. I tried taking different courses to see if an academic change would give me better direction, but I ended up leaving the university with a cumulative 2.2 grade point average (GPA) to work manual labor jobs. I came back to the UAH Mechanical and Aerospace Engineering department in 2010 after a deployment to Iraq."

He said leaving the university before graduating left him "wandering" without any real purpose, and destined for a dead end. "One day while sitting on the couch with my wife I looked at her and said ‘I think I’m going to join the Army tomorrow’. It was the best decision I ever made."

Wallburg joined the U.S. Army as a Canadian citizen, when he deployed to Iraq in 2009. "On Nov. 11, I convoyed to Baghdad to Saddam Hussein’s Al-Faw Palace to be sworn in as an American. This year marks my ninth anniversary as a U.S. citizen."

Wallburg served in the Army eight years, and finished as a Staff Sergeant and squad leader. He left the military with structure, discipline, and self-worth. "The Army is not great for everyone…you have to be willing to accept and embrace the rigor of the lifestyle. It is a great home for the wayward, as it is for the selfless. The comradery is unparalleled. You’ll find that you have a much larger extended family than you could have hoped for. But there is a tremendous amount of pride knowing that you are a part of a bigger function than just yourself."

Wallburg was hired as a systems engineer at the Boeing Company within months after graduating from UAH in 2013.

A "tinkerer by nature," Wallburg, with Boeing, invented a cyclic flexing salt-spray chamber and methods for determining operational performance of material systems.

"I worked on the Fast Lean Environmental Cell team in the Boeing Research and Technology Chemical Technologies group," Wallburg said. "Sean Pennell, Kris Williams, and Dr. Erik Sapper were the chemistry and experiment design side of the project, and I was the sole designer for a cyclic flexing apparatus that could handle up to 14 substrate panels per experiment. We submitted our patent application in 2015, and were awarded the patent in 2018."

Today, Wallburg is employed as director of the Cummings Aerospace Additive Manufacturing Laboratory.

"AM is a fascinating technology area. The ability to make a solid geometry starting from a powder or a filament is an absolute marvel. Use with topology optimization and conformal cooling is a complete game changer."

"We have produced products for Raytheon, MDA, and ASRC Federal Astronautics, and we have more work on the horizon. The most interesting thing about additive manufacturing is in the application of the different technology types. AM is not the cure-all for every manufacturing need, but it provides a solution for the previously unmanufacturable."

When Wallburg reflects about his career success he believes UAH is directly responsible for his professional acceleration.

"My favorite professors were Dr. Christina Carmen, Dr. Sarma Rani, and Seth Thompson. Statics was definitely my favorite class, and I had gone from being one of Dr. Carmen’s lowest grades to one of her highest.

"Dr. Rani was an excellent teacher for system dynamics, and Seth Thompson was one of the best professors that I had the opportunity to learn from. These three professors made a distinct impact in the type of engineer that I wanted to become. They exuded excellence, and made me want to do the same."

Wallburg said UAH prepared him for a career as an engineer by providing the fundamentals to survive entering the workforce.

"Fortunately, I had taken some courses in the university’s Industrial Systems Engineering and Engineering Management department, which I believe provided me a leg up for my first engineering position. The biggest benefit is that I had all of the fundamentals I needed for all of the job positions. My technical writing skills were developed by the high standards of the labs and projects that I worked on at the university," he added.

"When I switched from systems engineering to mechanical design, I was equipped to work in a CAD environment, perform hand calculations, and prepare and understand finite element analysis runs and results. UAH is a difficult school, and that is important for entering the workplace," Wallburg said.

"When I think of Drew, I think of a self-made success story whereby he achieved his present status by working harder than most any student I have encountered," said Dr. Christina L. Carmen, Clinical Associate Professor, UAH Department of Mechanical and Aerospace Engineering.

"Drew was a student in my statics class over 10 years ago. I remember him very well, even though he hardly ever attended class! On the first day of his return to class I saw him sitting in the front row - which he did for the remainder of the semester. He achieved one of the highest final averages - if not the highest - in all of my Statics classes. At that point I was sold on this young man who had turned his life around, was achieving academic success, and was a military hero," she added.

Carmen noted too, that Wallburg served as lead on a U.S. Department of Defense Special Operations Command project. The UAH team designed and built a Humanitarian Aid and Disaster Recovery Kit. "Wallburg's team performed with such exceptionalism that they were invited by the Special Ops Command to present their design efforts to U.S. Navy personnel in Washington, D.C.," Carmen added.

Wallburg, a firm believer in volunteerism has devoted hundreds of hours to the UAH chapter of the North Alabama American Society of Mechanical Engineers (ASME), UAH’s Veteran’s Network and the United Cerebral Palsy (UCP) Association of Huntsville and Tennessee Valley.

The late Al Reisz, a fellow veteran employed by Boeing, introduced Wallburg to ASME. Reisz was the lead contractor on the development and testing of the Saturn V rocket. He also worked with the Skylab program.

"Al passed away a few years ago, but his enthusiasm for getting professionals together was impacting," said Wallburg. "I’ve worked to bring better awareness to our organization, and our goal is to contribute back to the student and professional community through outreach. As a member of the ASME leadership team, I’ve attended the better part of 100 senior design reviews at UAH to assist students in bettering their projects and honing their engineering skillsets."

And, Wallburg is extremely happy to serve as a UCP board member. "My proudest work supporting UCP was in the university’s senior design reviews that I helped shape. The students on these teams get full credit for the outstanding, altruistic work they’ve performed for UCP and the UAH RISE School. I am very proud to have helped guide their product development into something that will positively impact a family with a special need."