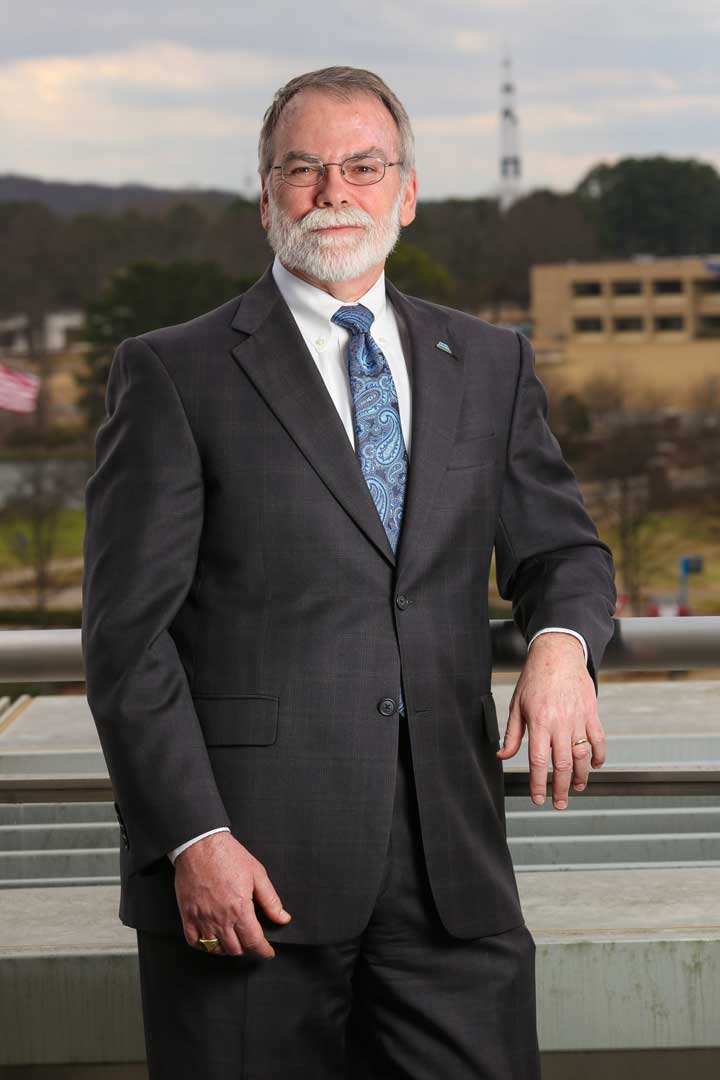 New statewide initiatives to build and fly complex scientific missions are among the goals the new director has for the Alabama Space Grant Consortium (ASGC).

Dr. L. Dale Thomas, a professor and eminent scholar in systems engineering at The University of Alabama in Huntsville (UAH), is the new ASGC director. Dr. Thomas is also the new director of Alabama’s NASA Established Program to Stimulate Competitive Research (EPSCoR) program. He is replacing Dr. John C. Gregory, who retired after 45 years of service.

A faculty member in UAH’s Department of Industrial and Systems Engineering & Engineering Management, Dr. Thomas will lead both efforts from offices on the UAH campus.

"UAH has been, and will remain, the lead institution for the Alabama Space Grant Consortium and the Alabama NASA EPSCoR programs," Dr. Thomas says. "I am assuming leadership of a statewide organization that is of particular value to UAH because it helps give greater visibility to UAH programs and will foster current and new relationships within NASA, the Dept. of Defense and Cummings Research Park, as well as collaborations with other Alabama universities."

"The Alabama Space Grant Consortium and the NASA EPSCoR programs are important because they connect Alabama students, educators and faculty to NASA resources and opportunities in various ways," Dr. Thomas says.

"The Alabama Space Grant Consortium was among the first 14 consortia and three universities chosen in August of 1989 for NASA’s space grant program, which promotes research and education in science, math, engineering and technology fields related to space exploration," he says. "Today, seven Alabama universities comprise the ASGC. Each university in the Alabama consortium offers masters and doctoral degrees in STEM fields and is involved in NASA-sponsored research."

Dr. Thomas says his goals will continue the ASGC’s legacy of effective and efficient program execution.

"I want to roll out some statewide initiatives to build and fly scientific missions of substantial scale and complexity," he says. "The ASGC primary programs are outstanding but are largely constrained to what can be accomplished by student teams at any particular university. This initiative will focus on larger and more complex flight projects that require cooperative efforts among multiple ASGC universities."

Dr. Thomas envisions each project accomplishing science objectives that will enable a university scientific principle investigator to attain results which will lead to publication in a leading peer-reviewed scientific journal.

"Since the scale of the project will require a cooperative effort among multiple ASGC universities, engineering and science students will learn collaboration skills absolutely essential in today’s STEM workplace," Dr. Thomas says. "Successful development and flight of missions of this scale is unprecedented among state Space Grant consortia, and will place Alabama at the forefront of Space Grant consortia."

Boosting the number and mix of ASGC industrial affiliates, improving alignment of ASGC programs with the efforts of local and state governmental and industrial organizations, and developing a strategy to foster innovation and entrepreneurship are also on Dr. Thomas’ agenda.

"When asked by a member of the ASGC management committee during the interview for my desired legacy if selected as ASGC director, I replied, ‘A large number of Alabama businesses with their roots in ASGC programs,’" Dr. Thomas says. "The Huntsville area in particular, but also other areas within the state, are experiencing sound growth of high-tech industry. This strategy will be developed through interactions with academic, business, civic and government leaders such that programs can be adjusted or new programs created to enable a robust, homegrown Alabama space business base."

Dr. Thomas joined UAH after retiring from NASA in July 2015. He serves as the deputy director of the UAH Propulsion Research Center, where he guides strategic planning.

"During my brief time at UAH, I have interacted extensively with the aerospace industry in the Huntsville area, as well as with government organizations on Redstone Arsenal to strategically align the UAH Systems Engineering program with the needs of industry and government in the area," he says. "These discussions led to the establishment of new curricula, Model Based Systems Engineering, and the establishment of the Bastion Technical Fellows Program for the sponsorship of engineering graduate student research."