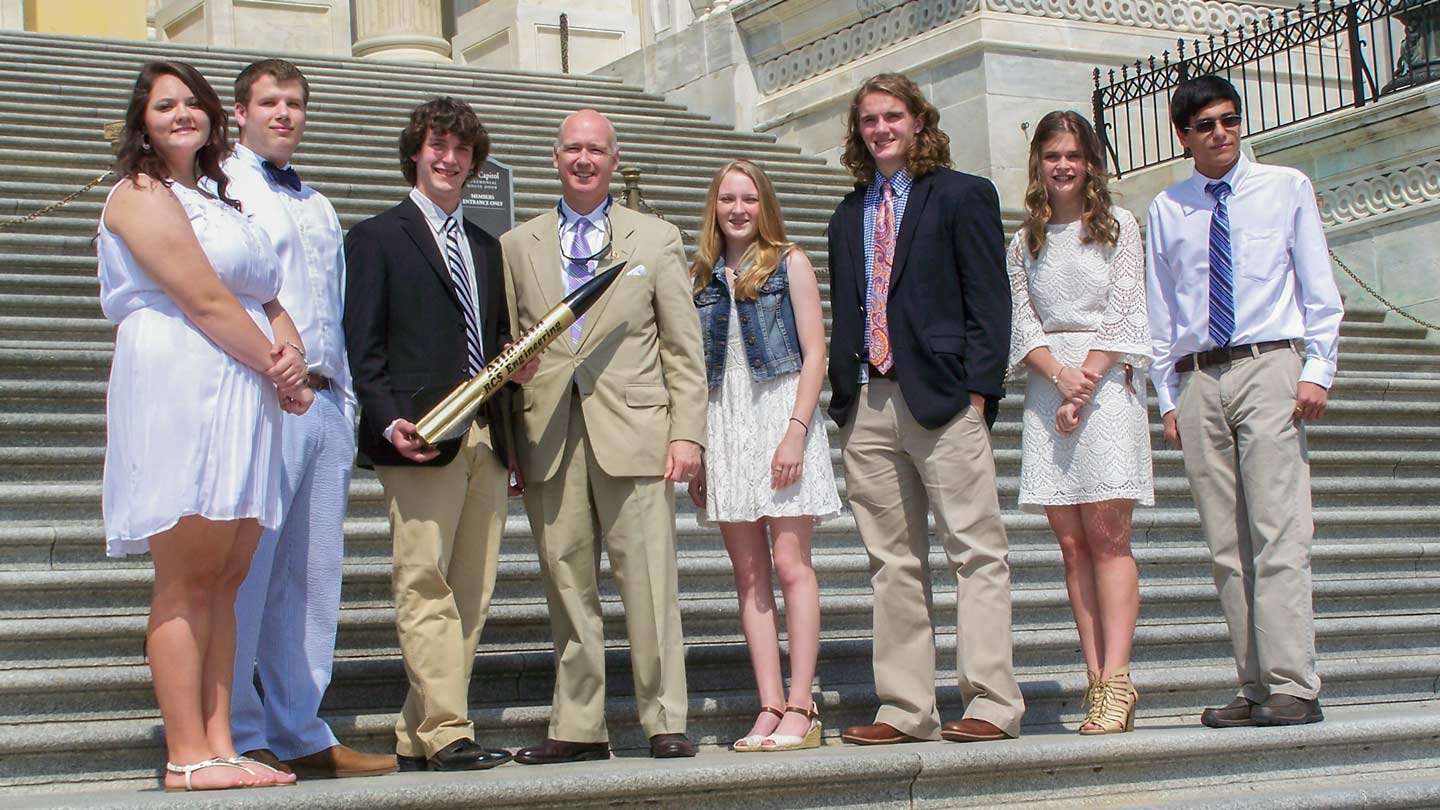 Before winning the Team America Rocketry Challenge, UAH freshman Evan Swinney (second from left) and his teammates met with Representative Robert Aderholt (R-AL) for a congressional breakfast in Washington, D.C.

The approximately $20 million in scholarships that The University of Alabama in Huntsville (UAH) disburses each year serve a dual purpose. First and foremost, they offset or even negate the cost of tuition for scholarship recipients, enabling them to attend the university without incurring excess debt. But just as important, they help UAH attract some of the best and brightest high school students from across the country and the world. Take, for example, freshman computer engineering major Evan Swinney.

"UAH has a great scholarship program to recruit students like Evan - hard working, academically strong, motivated," says Mary Pat Bohrman, UAH's Assistant Director of Scholarships. "Attracting this type of student is one thing that makes UAH such a sound investment, and that enhances our current status as first in Alabama and in the top 100 nationally for return on investment."

A native of Russellville, Ala., Swinney was already an outstanding student when he decided to join his high school's extracurricular engineering team. Though in previous years the focus had been on robotics, that year - Swinney's senior year - they decided to participate in the Team American Rocketry Challenge (TARC), a nationwide competition that challenges students to design, build, and fly a rocket.

The partnerships that we have with various individuals, corporations, and business groups allow us to extend opportunities to hard-working students to help them graduate in a timely manner – as well as help the university recruit and retain top-notch students like Evan.

"The goal was to shoot it to an altitude of 800 feet for a total flight time of 46 to 48 seconds carrying a raw chicken egg without breaking it," says Swinney, who was in charge of the rocket's electronics. "It sounds easy, but it's kind of difficult because you have to get it dead-on at 800 feet or you get points taken off for every foot above or below and for every second longer or shorter."

With perseverance - and "lots of trial and error" - the team ended up winning their local competition in April. And a week later, they learned they'd also placed in the top 100 of the 750 teams that had competed in TARC across the country, earning a coveted spot in the national competition that May at Great Meadow in The Plaines, Va. "When we found out, it was pretty awesome," says Swinney. "You just never think you're going to do it!"

"We had a perfect time but were 12 feet short of 800, so we had a score of 12," says Swinney of his team's first launch, which was also the first of the day. "Still, we were pretty sure we'd made it to the second round. We heard all these other cool teams with high-tech rockets say they got a score of 15 or 20." They were proved right, but faced with a different altitude and time for the second launch, there was still much that could go wrong. 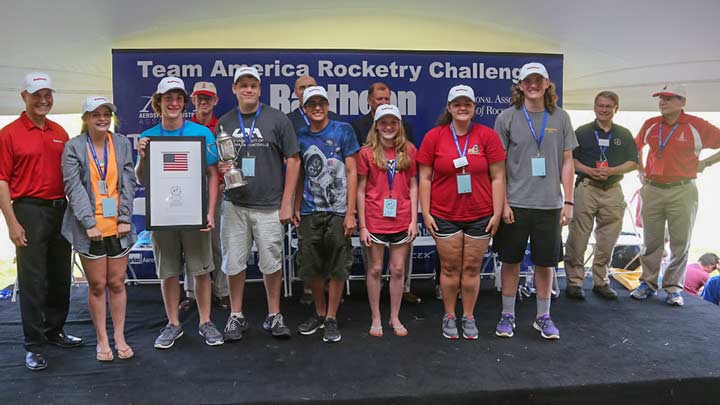 After winning the Team America Rocketry Challenge, Swinney (holding the trophy) and his teammates won the international rocketry competition held at the Paris Air Show.

"It was a challenge," he says. "From our practice launches we knew that a certain weight would yield a certain altitude. But then we had to factor in the weather conditions, because in the morning it was dreary and rainy and then in the afternoon it was hot, humid, and windy. So we had a big sit down where we laid everything out and addressed all the changes and thought about it as a team."

They ended up adding 30 grams of weight, yielding a perfect altitude and a time of 44.4 seconds. But was it good enough to win? "We were pretty confident we got in the top 10," says Swinney. Still, as name after name was called, there was no mention of the Russellville team. All of a sudden, they realized why. "Everyone's score was in the thirties and we were like, oh snap. Our score is 16. We won!"

Not only did they land the first-place award of $20,000, but they also received an all-expenses paid trip from competition sponsor Raytheon for the international rocketry competition in Paris in June. It was time to get serious. "We met twice a week before the national competition," says Swinney. "After, we started meeting every day for multiple hours, whether building, testing, launching. We were like, we have to win."

The team arrived in France on a Tuesday, and with no time to lose, presented their rocket to the panel of international judges as part of the competition's first round. "It was stressful, but we had worked extremely hard on it," he says. "We all spoke about our own specialty areas and then they had a question and answer period where they asked us random questions out of the blue."

By Thursday, it was time to launch their rockets at the Paris Air Show. As before, all three teams in the competition - the U.S., Britain, and France - were required to fly their rocket at an altitude of 800 feet for 46 to 48 seconds. But once again, the weather posed a challenge. "We just couldn't adjust for it as well, so our launch didn't go as well as we wanted," says Swinney. "We were expecting with all of our practice we'd be closer, but we were 20 feet off." 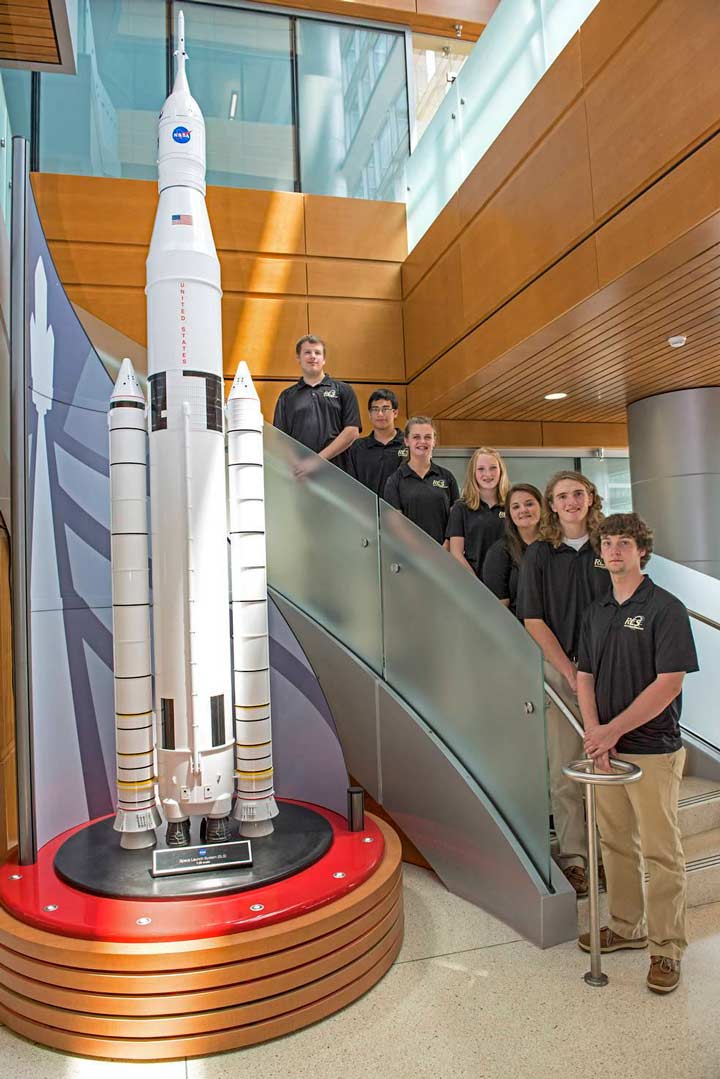 Swinney (far left), who received a tour of Marshall Space Flight Center with his teammates after returning to the U.S. from Paris, hopes to one day work for the space agency.

It was only after learning that the British team had undershot the mark by 100 feet and the French team had been disqualified when their egg broke that they realized that they'd won yet again. The little team from Russellville High School, with their modest rocket nicknamed "the golden rat" had just been declared the international rocketry champions. "I couldn't even believe it," says Swinney. "All the girls were cheering and the boys were like, wow, this just happened!"

By that time, of course, Swinney had already been accepted to UAH as a member of the fall 2015 freshman class. He'd even qualified for a 50% merit tuition scholarship based on his high school GPA and ACT score. But hopeful that his victory in the international rocketry competition might enhance the competitive scholarship application he'd submitted earlier in the summer, he reached out to Mary Pat Bohrman in UAH's Financial Aid Office.

"I called Mary Pat and told her what had happened in Paris," he says. "She said she'd help me find something, and she did." Intimately familiar with the more than 400 competitive scholarships that UAH offers, Bohrman directed Swinney to the Durkee Endowed Scholarship, enabling him to cover the remainder of his tuition and making the outcome a win for both Swinney and for UAH.

"Scholarships are important to so many students who, without that additional aid, might not be able to attend," says Bohrman. "The partnerships that we have with various individuals, corporations, and business groups allow us to extend opportunities to hard-working students to help them graduate in a timely manner - as well as help the university recruit and retain top-notch students like Evan."

With that weight off his shoulders, Swinney now is looking ahead to when he might be able to put his rocketry skills, and the UAH degree he will ultimately earn, to use on a much larger scale. "Working at NASA would be amazing," he says. "Anything that combines computers and space exploration would be the best because it ties together my hobbies as well as my academic interests."

He's also optimistic that others from Russellville High School may one day follow in his footsteps. "I was the only senior on our team," he says. "The rest were juniors, sophomores, and middle school students. So hopefully, with our win in Paris, we're setting the younger ones up for success." If so, it's likely there will be some future UAH scholarship recipients among them.