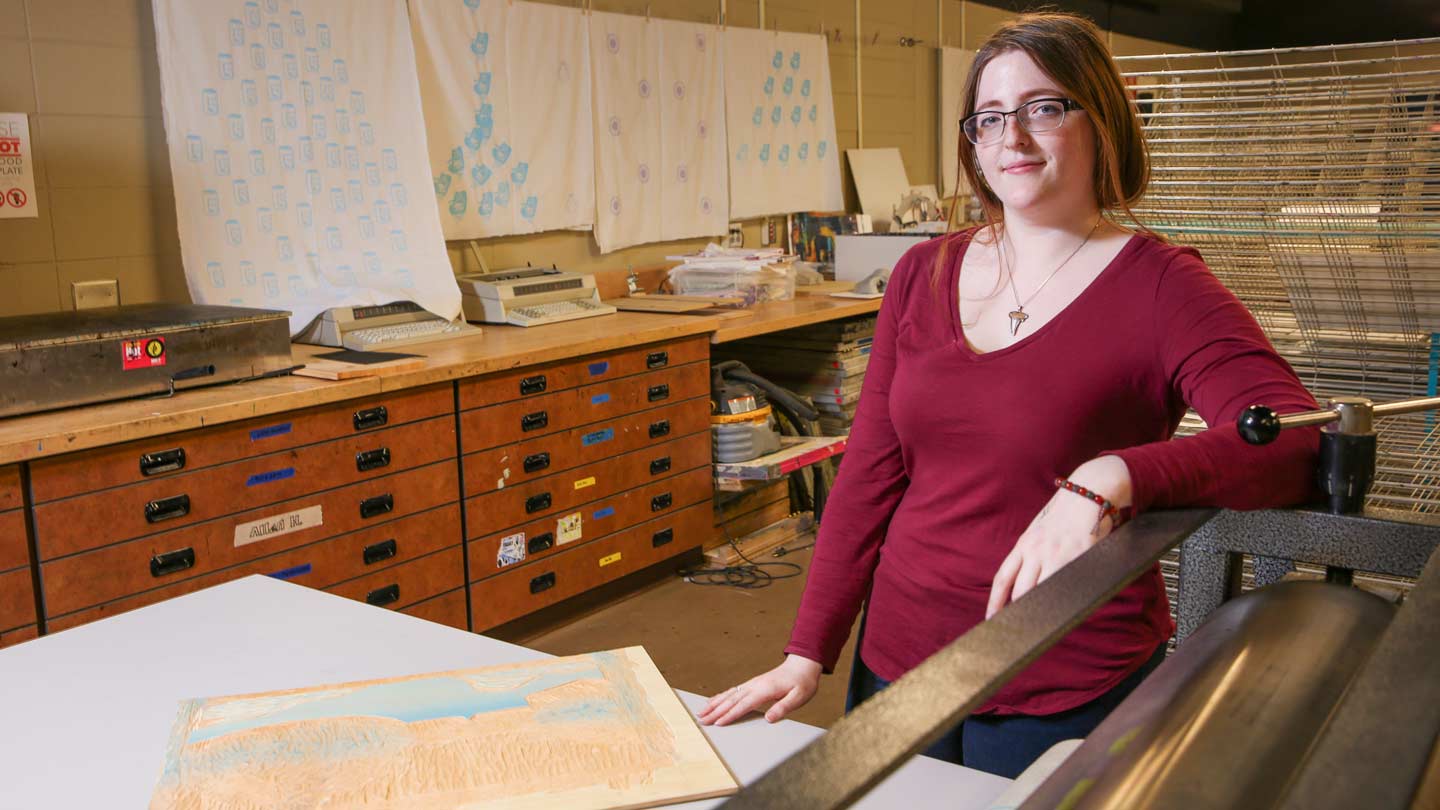 UAH senior Aoife McDonnell, who is earning her Bachelor of Fine Arts with a focus on printmaking, recently completed a two-week intensive summer workshop at the Penland School of Crafts in North Carolina.

Aoife McDonnell has been drawing for as long as she can remember. So it’s probably safe to say that her plan to major in psychology at The University of Alabama in Huntsville (UAH) was doomed from the beginning. "I tried not to go into art!" she says with a laugh. "But I just ended up doing it." Now the American-born daughter of Irish immigrants is about to graduate with a Bachelor of Fine Arts (BFA) before launching her professional career as an artist.

McDonnell’s focus in on printmaking, a field that was recently brought back into vogue at UAH by assistant professor of art Katie Baldwin. "I fell into printmaking after taking Katie’s class my sophomore year," says McDonnell. "I really liked it – that combination of working with old and modern techniques – and I liked that I could make multiples of my artwork instead of one precious drawing."

At Baldwin’s urging, she also began looking at extracurricular ways to expand her knowledge of the field, and last spring, she applied to a two-week intensive summer workshop at the Penland School of Crafts in North Carolina. "I found out late in the semester that I was accepted," she says. "I was a little worried because I’m just an undergraduate and it’s mostly for graduate students and working artists. So it’s crazy that I was accepted."

There were no grades and no pressure – it was all about experimentation and doing what you wanted with the information given to you.

Comprising printmaking and letterpress classes on topics like woodblock printing, etching, and intaglio, the workshop ran from July 22 to Aug. 11. McDonnell spent her mornings cleaning in the kitchen in fulfillment of her work-study scholarship and her afternoons and evenings in the studio. "The teacher would set a demonstration time during which she’d teach us techniques, and then when she was done, we could work on our own projects," she says.

That made for quite a different environment from a typical college classroom, she continues. "There were no grades and no pressure – it was all about experimentation and doing what you wanted with the information given to you." In fact, the only real requirement was a class exchange, where each member of the workshop was asked to make a print for his or her classmates to take home. "I kept thinking there were bears there, so I did a linoleum-carved cuddly American black bear with the species name in Latin and then ‘grrr’ in English," she says.

With the workshop’s intensive focus on letterpress printing, and in particular on the Vandercook printing press, McDonnell returned home feeling like she’d learned much more than she could have anticipated. "Before I went there, I’d never used those presses and I’d had very little letterpress experience in general," she says. "But by the time I left, I felt really comfortable with it." Now she’s putting those skills to use in her last advanced print class at UAH and as she prepares for the final exit show required of all BFA degree candidates. 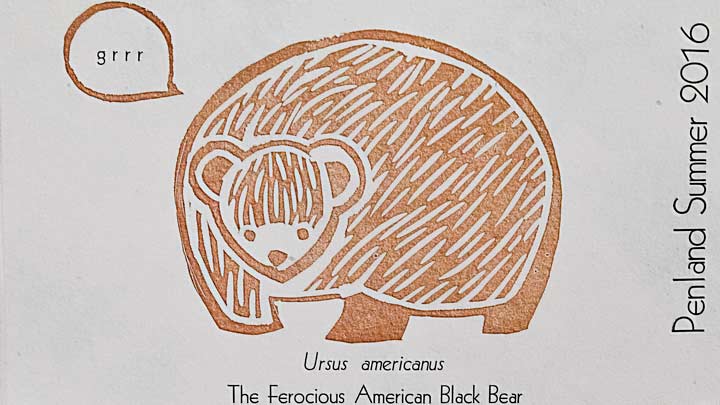 While at Penland, McDonnell made multiple prints of a linoleum-carved American black bear to share with her classmates.

"I haven’t come up with a title yet, but over the past year I’ve been developing my narrative and conceptual theme," she says, adding that much of it focuses on her identity as a first-generation American and the daughter of an Army-enlisted father. "A big part of my life was being surrounded by military ordinance because my dad was a bomb technician, so I’m trying to tell bits of my past, while at the same time working with this broader idea of misplaced or strange or out-of-place objects."

McDonnell is also looking to expand from the two-dimensional limitations of screen printing on paper and into the three-dimensional opportunities of screen printing on fabric. "I used to sew as a hobby, and now it’s finding its way into my artwork," she says. "Last semester, as a trial run, I screen printed mortar rounds onto this baby-girl fabric in the same color scheme, and I sewed it and stuffed it into a teddy bear. So that’s something I would have owned as a child, but the imagery on it is something that relates to what I was exposed to growing up."

Not every trial run is a home run, of course. But in addition to printmaking techniques, McDonnell has learned something perhaps even more important from Baldwin: to take risks as an artist. "I feel like I’ve really been encouraged to draw anything that comes to mind," she says. "Katie is very supportive, and if I ask her, she just says, ‘Do it!’ If it’s wrong it’s wrong, and if anything, you learn it didn’t work."

In essence, that’s what McDonnell did three years ago when she decided to switch majors from psychology to art – and so far, it seems to be working out just fine.