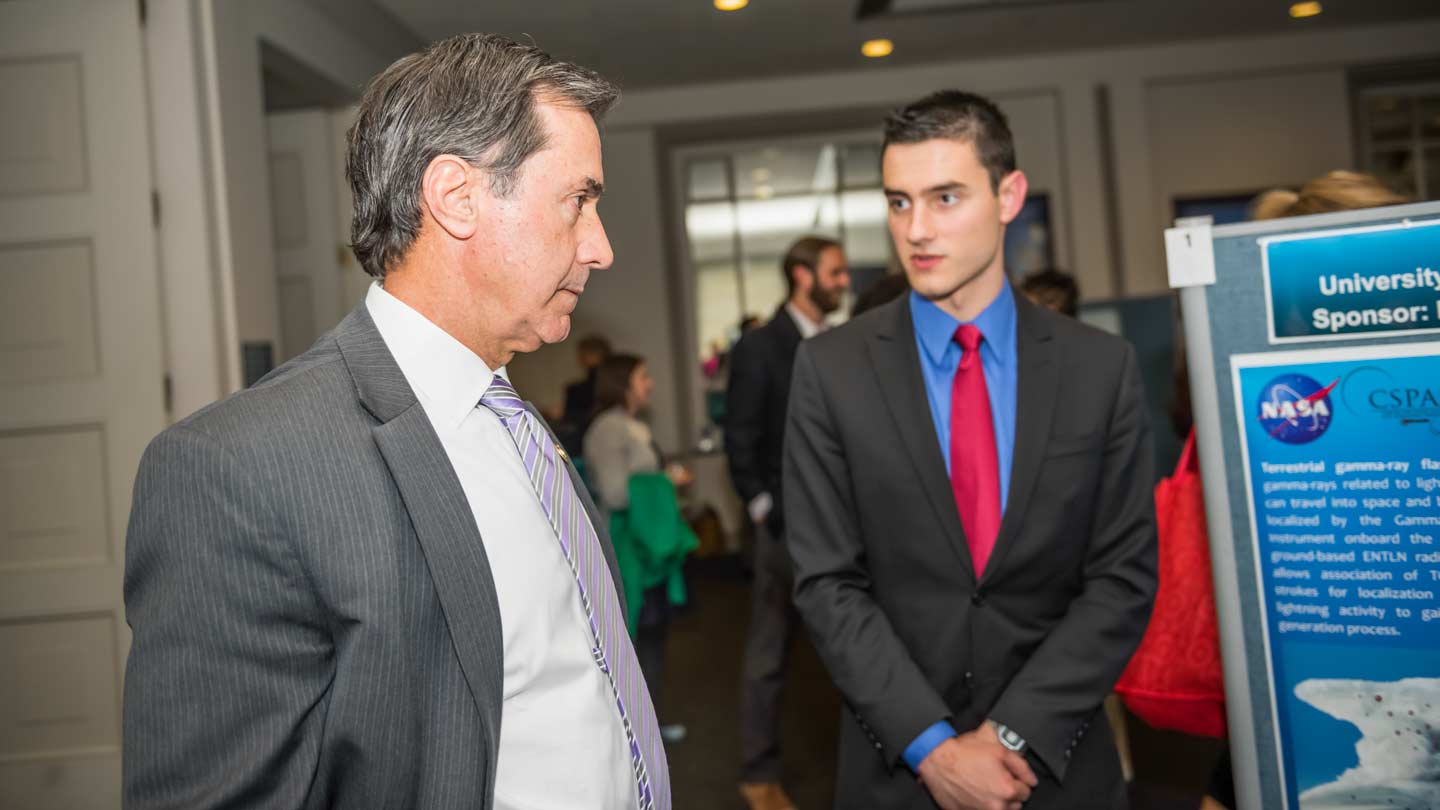 U.S. Rep. Gary Palmer of Alabama’s Sixth District, left, who is a member of the House Committee on Space, Science and Technology, talks with UAH’s Kareem Omar.

For the second year in a row, a student at The University of Alabama in Huntsville (UAH) was chosen for the highly selective national Council on Undergraduate Research (CUR) Posters on the Hill (POTH).

One of just 60 chosen nationally, "Characterizing the TGF-Lightning Relationship Using ENTLN," is the title of the research poster by Kareem Omar, a sophomore Honors student who is a double major in physics and aerospace engineering with a 4.0 grade point average. The 19th annual session of POTH was held recently in Washington, D.C.

Omar also participated in the 2015 Research Horizons Poster Session and the Elevator Pitch Sharing Session during UAH Research Week and was selected for the UAH Research & Creative Experience for Undergraduates (RCEU) program this summer.

"I was impressed that Alabama received two spots in this year's Posters on the Hill program, beating out hundreds of candidates from all over the country," he says. "I was honored to be one of them and to represent UAH, Huntsville, the UA system and Alabama in Washington."

UAH is an amazing place for this kind of research, and I truly hope to see more and more students getting involved.

His poster was displayed at an evening reception event in the Rayburn Cafeteria of the Rayburn House Office Building and was viewed by lawmakers, staffers and federal employees. Winners of the competition spent two days in Washington advocating for undergraduate research, celebrating and raising awareness of research conducted by undergraduate students nationwide.

Winners also scheduled meetings with their representatives from their home district and from the district in which they go to school to share their work, explain the importance of undergraduate research and advocate for federal agencies that catalyze student research, including public universities.

"In my particular experience with the program, my advisor and I personally met with three congressmen, two of whom were on the House Science Committee," says Omar. "We also met with the staffs of three senators, two from Alabama and one from my home state of Kentucky."

He first heard about the CUR program from an informational email sent out last year by Dr. Shankar Mahalingam, UAH dean of engineering. CUR is a professional society whose mission is to promote the participation of undergraduates in research.

"I had conducted significant undergraduate research on terrestrial gamma-ray physics that I hoped could serve as a good example of the value of funding undergraduate research, public education and federal agencies that support research, such as NASA, the National Science Foundation and NOAA," Omar says. "I jointly applied to the program with my mentor, Dr. Michael Briggs, answering further questions about my research, goals and abilities, and my work was selected along with 59 other undergraduates in the nation from a pool of around 500 applicants."

"To say that this work would not have been possible without him is a tremendous understatement," Omar says. "He and his team have been researching TGFs since the launch of Fermi, and my work has been concentrated in writing advanced software to facilitate a variety of new techniques for understanding TGF generation. He is a wonderful mentor and is extremely supportive."

Omar found out about the CUR poster competition just one day before deadline. He says Dr. Briggs took time out of his busy schedule to jointly apply with him. Dr. Briggs also came to Washington for the POTH events.

"I applied to this program because I believe in what it stands for, and I really do think undergraduate research is one of the best ways for a student to gain experience and sharpen their skills," Omar says. "Accomplished scientists can solve most problems with ease, but don't have time to burn on the small stuff. Students have the time to learn how to solve those problems and solve them for their mentors, thus saving them valuable hours.

"This is why undergraduate research is useful even when the mentor is orders of magnitude more experienced than the student, and because the student learns in the process, it is valuable to both parties," he says. "UAH is an amazing place for this kind of research, and I truly hope to see more and more students getting involved."